Virgo season — when the chaos of social summer gives way to the pull of order and organization; when we feel called to simplify our lives, and strip back to basics. Beginning on August 21 or 22 every year, Virgo season is associated with themes of responsibility and order. (In social media memes, Virgo energy is often depicted as craving structure and regulation above all else.) As such, as summer winds down, we may feel called to emotionally prepare for the coming harvest. This means doing some emotional house cleaning so that we may be ready for the hard work of the transitional season to come. It also means purifying our lives of what no longer serves, and seeking simple contentment with what we already have, rather than seeking what we do not.

Earth-sign Virgo is symbolized by the virginal maiden, carrying a shaft of wheat. Not only does We’ll chalk the idea that she represents “purity” up to the fact that the astronomer Ptolemy, largely credited with popularizing the Western zodiac with his book, Tetrabiblos, was writing when “smashing the patriarchy” was far from inception. The wheat that she carries is a nod to the fact that in Ancient Egypt, the beginning of Virgo season demarcated the beginning of the wheat harvest.

Virgo’s ruling planet is, like Gemini, Mercury — the planet of communication and order. In this cycle, of course, it is Mercury’s order that is most felt during Virgo season. It is associated with the nervous system, the digestive system, and the intestines; in fact, the Virgo glyph, which looks something like an “M,” is meant to represent the intestines.

How Virgo Themes Show up on the Mat

Perfectionist Virgo has a lot to teach us about releasing ideas of expectation, and about getting our own mind’s chatter in order so that we may find contentment and ease with what is, rather than capitulating to our expectations. We could talk about the tenets of Bramacharya or Saucha, instructing us toward measures of austerity and purity. Yet Sutra 2.33, which alludes to the Vedantic principle of Pratipaksha Bhavan, which is an interesting teaching to keep in mind during Virgo season.

The practice of Pratipaksha Bhavan instructs that when a negative thought overtakes our mind, we have the ability to purify that thought and find order by simply overwriting it with something positive. This can be a thought, word, or deed — something as easy as speaking a positive truth out loud, looking at an image that brings peace, or even practicing seva. We all have a responsibility for the quality of our thoughts and the way in which we show up in the world. Sometimes it’s the simplest way of doing so positively that brings us the most content. 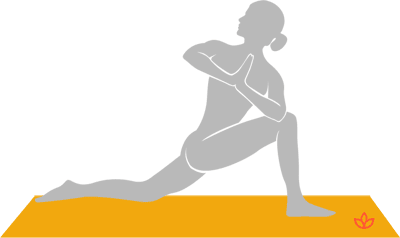 Anjaneyasana is named for Hanuman’s mother, Anjani. It is considered a devotional pose; symbolic of a person reaching toward the heavens.

This standing twist is a functional take on a Revolved Crescent Lunge (Parivrtta Anjaneyasana), in which hands are brought together in front of the heart and spine is torqued to draw elbow to opposite knee. Bring ease to the posture by remaining upright and extending arms out wide. By finding rotation from the rib cage, Crescent Lunge with a Twist widens the wingspan to open the chest and shoulders, and mobilizes the thoracic spine. It is often speculated that twisting postures help stimulate digestion and wring out impurities as blood flow circulates to the internal organs and kidneys.

Turning the chin slightly opens the throat (Vishuddha) chakra, so long as the cervical spine maintains its length. As the internal organs are stimulated, the solar plexus (Manipura) chakra becomes activated. Spaciousness cultivated in the back-body and chest also facilitates an opening of the heart (Anahata) chakra. 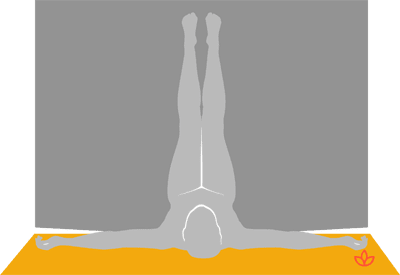 Legs Up the Wall Pose is a restorative posture that is an ideal substitute for Shoulder Stand (Salamba Sarvāngāsana), since it does not place weight on the neck. Classical Hindu yoga texts describe the upward moving energy, or Kundalini, through the spinal cord that an inversion such as this can facilitate.

Perhaps the most effective posture to ease discomfort in the lower back, Legs Up the Wall stimulates the rest-and-digest state of the parasympathetic nervous system. It’s a gentle stretch to relieve foot, leg, or menstrual cramps, and helps to regulate blood pressure, reduce anxiety, alleviate headaches, and even mitigate symptoms of mild depression. If tension arises in the lifted legs, bring the feet together and let the knees fall out wide, or let the legs release into a straddle.

Seated Forward Fold increases circulation to the liver and kidneys and to the uterus, making it a potential relief for menstrual or menopausal discomfort. As the base of the seat is anchored, the spine lengthens from the tailbone to the crown of the head. To deepen the posture, the knees can bend slightly, perhaps with a rolled up blanket beneath them.

To fold into oneself is humbling. When we come into a Seated Forward Fold, we are bowing not only to ourselves, but honoring our small yet significant place in this very big world—a crucial sentiment in seva. This pose activates the root (Muladhara) chakra by grounding down to the earth, releasing into gravity. As the neck and cervical spine release, the throat (Vishuddha) chakra opens gently. The posture also stimulates the solar plexus (Manipura) chakra, our center of outward action and empowerment. 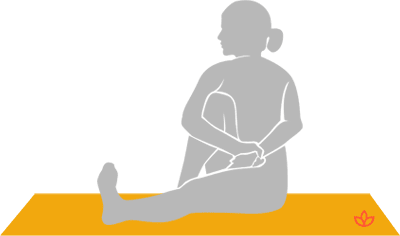 Marichi is loosely translated as “sage,” or a ray of light from the sun or moon. Marichi is the son of Brahma, and one of seven seers (rishis), or lords of creation (prajapatis). Marichi is also the great-grandfather of Manu, who, in Vedic tradition, is considered the father of the human race.

Seated Spinal Twist can help improve digestion. When we tend to this “second brain,” we create clarity and alleviate nervousness, while gently stimulating the body’s natural detoxification process. The posture also benefits a healthy spine when rotation is natural and not forced.

Seated Spinal Twist rouses the root (Muladhara) chakra and taps into our foundation, our place of personal peace. Tuning into our sacral (Svadhisthana) chakra—the center of our creativity—allows us to hone what makes us tick, what helps us feel centered and whole. By opening the throat (Vishuddha) chakra, the twist increases the ability to communicate from a place of serenity and content.