In the Vedic Scriptures the energy of Surya – Sun is regarded as the benevolence of divinity bestowing strength, abundance, intelligence and self-realisation. The traditional ritual of Surya Namaskar has become widely known to the everyday world of Yoga practise, usually commencing with a modern variation of a Sun salutation.

The Rigveda reveals the disk of the Sun functions as a chakra opening gateway between the human realm and the world of the Divine Energies.

Sanjana who is the consort of Surya, transcended onto earth into the forests to perform a tapasya (penance) to obtain the strength to absorb the heat rays of her consort Surya. Her long deep state of tapasya began entering into to a state of samadhi. As her tapasya climaxed, Surya full of happiness and excitement approached the tapo bhumi (penance ground) taking the form of a green stallion. Galloping with ecstatic joy to reunite with his consort, the stallion entered into a mystical dance to awaken Sanjana and reward her tapasya.

Surya stallion thumped his right foot adorned in anklet bells; resonating the sound of a drum awakening her root chakra and the jingling of bells opening her third eye chakra. Jumping and swirling gracefully, the stallion started neighing making sounds of a conch; directly evoking the crown and throat chakra.

The body of Sangha started to tremble and perspire in excitement as she felt the energy of her consort aligning and merging with her own chakras.

Offering gratitude and love, Sanjana softly opened her lotus tear-filled eyes to see her loving Surya ecstatically dancing in the form of a green stallion leading to the heart chakra opening.

The almond-shaped eyes of the stallion pierced fiery golden rays directly into Sanjana’s loving eyes opening her sacral and solar plexus chakras. Thus, all the chakras of Sanjana realigned with her consort Surya and she was blessed to hold the Sun’s energy.

This beautiful, transcendental yoga flow is still practiced by many mystical Yogis enabling them to open their chakras and achieve spiritual enlightenment through the sacred energy of the Sun and his consort.

How to practice the Yoga Flow

A tilak of Kumkum paste is applied is to the forehead which is known as the center of latent wisdom and concentration and the gateway to the third eye.

Water offerings are poured to the Sun acknowledging his energy as a source of movement, creativity, passion, and pleasure followed by Surya namaskar

Japa of the Surya beeja (seed) mantra is chanted on a garnet gemstone mala evoking his energy:

Ignited cotton wicks drenched in ghee (clarified butter) are placed on the palms and on top of the kalasha which is then balanced on the head.

Then the dance of the green stallion commences gradually by thumping the right leg, whilst swirling around softly waving the flames on the hands in circular motions.

As the flames start to climax they are removed from the palms as well as the kalasha.

The dance flow continues into jumping gallops, clapping of hands in swift movements and evoking neigh sounds just like that of the stallion.

If mastered correctly in posture and with devotional love, this practice can transcend into a beautiful sacred opening attracting the spiritual energies of Suraj and Sanjana

What you need for the flow

Further information can be found here. 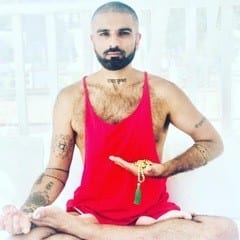 Nik Palmar is the founder of Kleem, a brand dedicated to sharing a journey of mystical experiences; yoga, vibrational mantra chants and mindful living, along with spiritual heritage, culture and passion to make their vision easily accessible to the modern contemporary world. Kleem embraces the present and seek to stay grounded in gratitude for the beautiful and extraordinary gift that is life.

The hope is that wherever you are on your journey, Kleem will inspire you to keep seeking truth, love and compassion and live authentically in everything that you do.