June 21 marks the second annual International Day of Yoga, as recognized by the United Nations. Inspired by Indian Prime Minister Narendra Modi who addressed the U.N. General Assembly in 2014, the International Day of Yoga was made manifest to celebrate a universal practice that unites the world through oneness. Robert Sturman, a revered photographer who has traveled the world to honor what he has called “the poetry of asana,” dedicates himself to uniting cultures through the universal language of yoga. We recently caught up with the influential artist to learn more about his journey, and how he uses asana as an art form to tell the story of humanity.

A lifelong love affair with art began in 1984, when a young boy was dropped off at boarding school by his father and given his first camera. Fast-forward and Robert Sturman, a 46-year-old photographer from Santa Monica, Calif., has spent his life devoted to exploration and cathartic creation, realizing himself as an artist for the world—rather than an artist who was trying to work out his own demons. Sturman does not suffer for his art, like many of his artistic heroes have done before him. It was an awakening through the practice of yoga when he first began to rewrite that script—and point his lens toward the great beauty of humanity.

Sturman’s purpose as a photographer and artist began with a Polaroid camera before he transitioned to digital photography in 2010. He spent nearly 20 years working with Polaroid film, using a unique labor-intensive technique. By etching and hand carving into an underdeveloped image, he was able to create a photograph akin to an Impressionist-like painting. 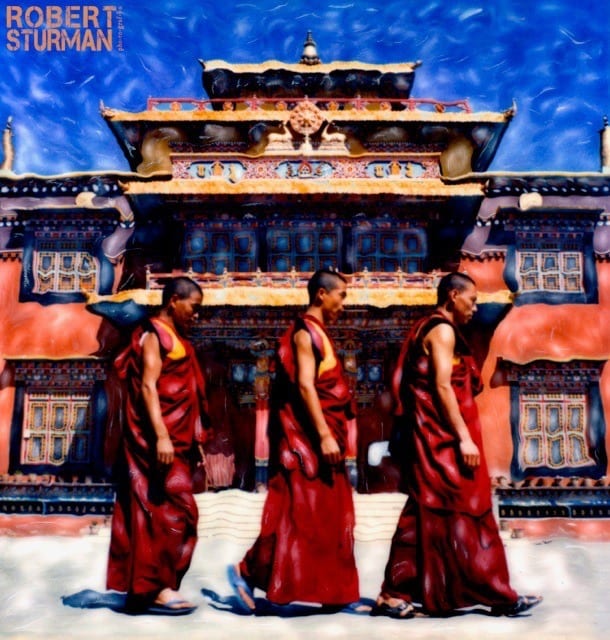 A Polaroid work of Tibetan monks in Kathmandu, Nepal.

The Polaroid years took him to Nepal, India, Burma, Cuba, Mexico, and beyond, until sometime in the year 2000 when he decided to start practicing yoga. “I felt like I needed something as an artist to sit still within the suffering of humanity; within the internal fire—within all the things we do to run away,” he said. Yoga laid the groundwork for Sturman, and it didn’t take long before he realized that yogis were some of the greatest models the history of art has ever seen.

“Yoga is this figurative poetry that has the expression of a human being longing to be the best version of themselves they can be,” he said. With that assertion as the foundation for his work, Sturman’s photography communicates yoga as a universal language to tell the story of what it means to be human. His portraiture of the yogis is reminiscent of the Renaissance paintings or ancient sculptures of Greek or Roman gods. Sturman has observed a similar theme depicted throughout these great works of art—Michelangelo’s Sistine Chapel, for instance, portrays its subjects reaching toward the heavens for something greater than themselves.

Throughout history, art has told this story. With yoga, Sturman explains that his work is simply a reflection of a shared love for the practice between a photographer and a yogi. “I can go anywhere in the name of yoga, and it doesn’t matter what religion, country, or culture, or if there’s conflict or turmoil—it all gets erased,” he said. “It just strips it down to the basic human heart—to be sincere and be their best, no matter where in the world they are.” 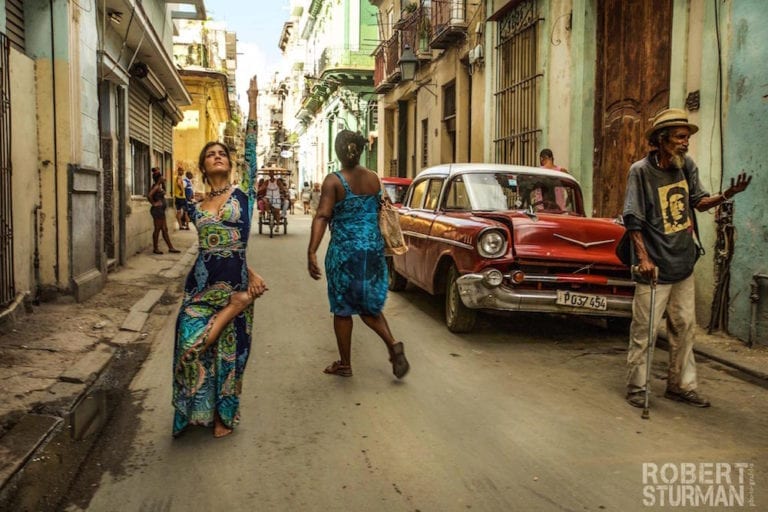 Sturman’s work acknowledges yoga as a language unto itself, transcending the barriers of geography and uniting people across cultures. He’s tapped into the power of social media, using it as a tool to foster a sense of global community among yogis of all walks of life. With widespread yoga photography having inundated the digital realm, what some may view as narcissistic, Sturman would argue otherwise. In his eyes, it’s those who spread yoga through images who contribute to make the practice a part of our language—it’s a shared desire to celebrate the world and all the people in it.

Social media bridges the gap between an artist and their following; it’s a platform to reach the masses to spread and share ideas and innovations anywhere in the world—and all with just a laptop, a cellphone or a camera. “I like to think if da Vinci had Facebook and Instagram, how would he use it?” he said. “It’s such a gift to humanity.” And Sturman certainly utilizes this gift—he posts images and shares his prolific, poignant messages like clockwork. It’s a wonder how his well does not run dry. For Sturman, it’s a creative practice he’s been committed to since youth, before the days of sketchbooks and journaling were replaced by what he calls the “Social Media Renaissance.”

“When it came time to start embracing social media, I had already worked out a lot of my negativity and was able to step aside and just make an offering for humanity,” he said. “It’s effortless to me.” 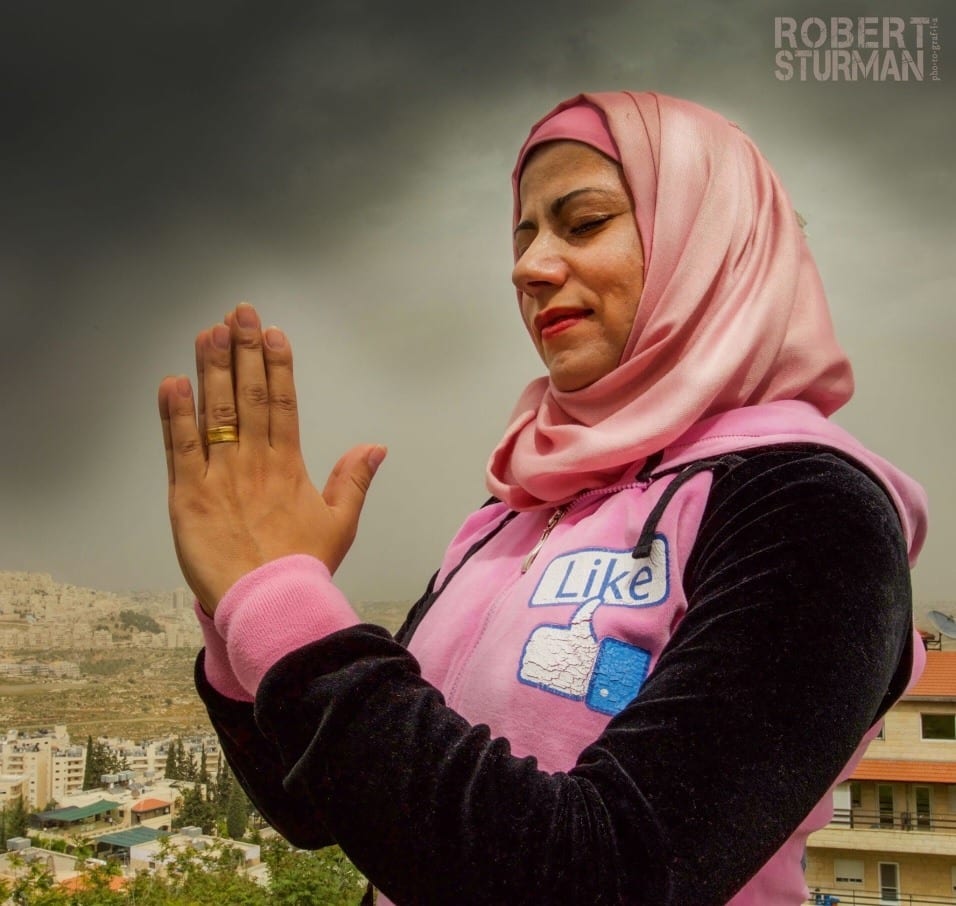 Rula Samer, a prenatal yoga teacher, with her hands in a prayer in Bethlehem, Palestine.

Sturman realizes the luxury of his profession as a photographer; that spending six hours working in a juvenile hall, on Skid Row, or at an orphanage in Africa, can generate compelling images that withstand the test of time. From veterans who have lost limbs, to prisoners, soldiers, police officers, or firefighters, his diverse body of work has led him around the world to transform fleeting moments in time into art everlasting.

In 2013, Sturman participated in an expedition to Kenya with the Africa Yoga Project, where he visited a prison filled with HIV-positive women. He spent time with the inmates there, discussing yoga and taking photos; deeply moved by the experience of looking into their eyes and recalling their smiles when he showed them their pictures.

While in Nairobi he visited slums and villages, and then eventually the foothills of Mount Kilimanjaro where he met Jacob Parit Noomek, a Maasai tribesman who served as his guide. Sturman was sent to Maasai country to document an already thriving yoga community there, but there was something about Noomek that caught his eye. It didn’t take long for the Maasai warrior to turn from being his guide to his subject.

Sturman could not resist getting Noomek—traditionally dressed in a red shuka with an accompanying seme (a double-sided sword) and adorned with brightly colored bracelets, earrings, and beaded necklaces—to pose for a photo. Noomek was shy, however, so it took some convincing, but once Noomek saw his pictures on Sturman’s camera he could hardly believe his eyes. To this day, an iconic image they created together with Kilimanjaro in the background has been Noomek’s profile picture on Facebook. 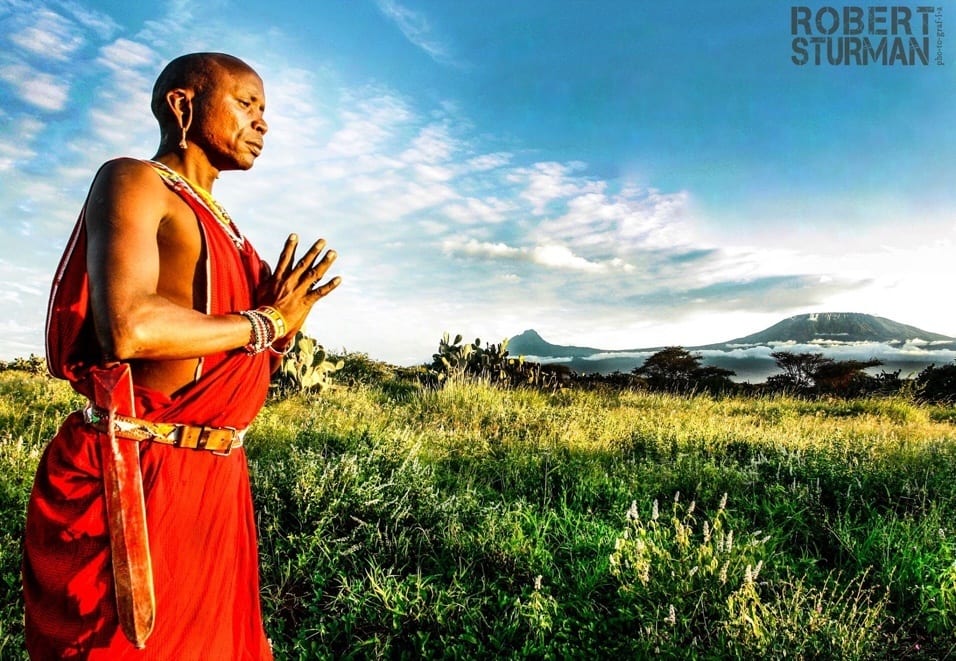 Noomek pictured at the foothills of Mount Kilamanjaro in Kenya.

“It’s just this process of getting to know someone and seeing their beauty—so it may seem wild to them, but to me, it’s just another day at the office,” he said.

On Sturman’s home soil in California, memories from a trip to San Quentin State Prison in 2011 still stand out in his mind. He recalled when a prisoner once asked for his name so that he could direct his family to Sturman’s work online. The prisoner wanted to show his family that he was doing something positive during his sentence. Sturman has returned to that prison every year since. “The main thing that I’ve witnessed is that everyone really lights up when they feel like they’re being seen, paid attention to and celebrated—and you’re just reflecting that back to them,” he said. 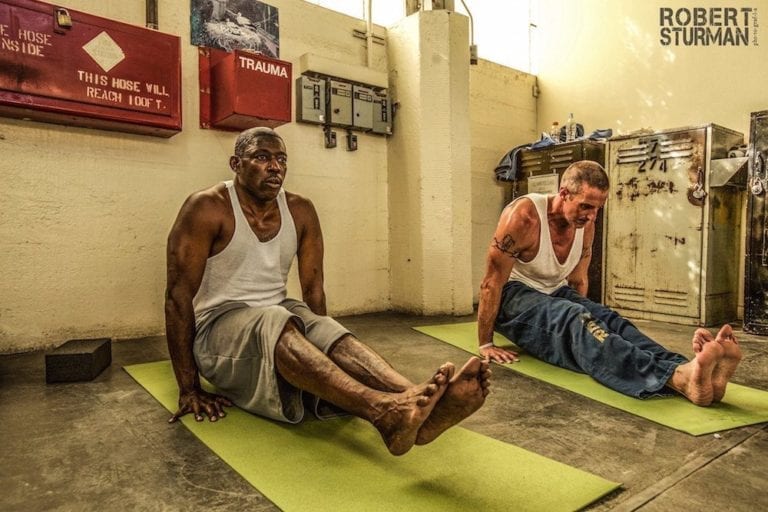 Sturman’s work is so infinitely vast, diverse, and yet, still so intimate. He often quotes Rumi that he “can’t stop pointing to the beauty”—words that he continues to embody and live by; a mantra that steers him clear of disingenuous terrain. What he describes as his moral obligation, it’s his dedication to illuminating the best in humankind that upholds his originality; that continues to move people all over the world. Sincerity may be his most valued asset when he works with his subjects; his magnanimous spirit brings out the exceptional in everyone he captures through his lens. “The only thing I’m potentially an expert on is being myself, and that’s really all it takes to communicate with others and give them the space to give you their world,” he said.

For more images, head over to Yoganonymous for the full International Day of Yoga slideshow.

Andrea Rice is a Senior Writer for Wanderlust Media. She is also a freelance writer, editor, and yoga teacher. Her work has appeared in The New York Times, Yoga Journal, SONIMA, mindbodygreen, AstroStyle, and other online publications. You can find her regular classes at shambhala yoga & dance center in Brooklyn, and connect with her on Instagram, Twitter, and on her website.