Ready to experience the magic of a mindful community? There’s no better place than at a Wanderlust 108 event—the world’s only mindful triathlon. Click here to find an event near you! If you’re in the Nashville or Houston area, event dates are just around the corner.

Virginia Key, a tiny island connected by a short bridge to Miami, feels like a millennial melting pot today. With more than a thousand yoga mats sprawled as far as eyes can see, Wanderlust 108 represents everything Miami and so many urban areas are striving for: to celebrate our individual, cultural identities while unifying the collective whole.

At 108, we’ve raced full circle. On this warm October morning, our collective mass of runners, yogis, and meditators covers a complex land striving for deep healing. Virginia Key, hailed today for its dedicated historical and ecological restoration, was once Miami’s shameful secret: a segregated beach for “coloreds” during the Jim Crow era.

Just to the south of the island you see Key Biscayne. It’s a highly affluent island favored for family beach outings, but I still remember the news footage of 200 Haitian refugees landing on its spotless shores, desperately seeking safe haven and political asylum.

Behind Virginia Key stands the sprawl of Magic City (as we affectionately call Miami). It’s congested and noisy, and easy to feel detached here. But the city is also powerfully stimulating and deeply soulful; it’s the adapted home of over two million Cuban Americans, as well as immigrants from all over the Caribbean, South and Central America.

“It’s not easy to have quiet thoughts in a city like Miami that never slows down,” says Zoe Plasencia,” a second-generation Cuban-American yoga teacher and devoted marathon runner. “I use my meditation practice and pranayama to help me stay focused on my endurance races. It helps to quiet my thoughts when my body just wants to stop.”

So what happens when over 1,100 Wanderlusters—many of whom, like Zoe, are second-generation Americans who speak more than one language at home—come together on a small island to run, practice yoga, and mediate as one vibrant soul?

“An event like Wanderlust 108 brings awareness into just BEING,” says Zoe. “The yoga and running communities are very strong in Miami, they are like family. And more endurance athletes are discovering the benefits of strength with ease, and power with peace!”

Zoe’s intuitions and assessments about collective practice are spot-on. Many evidence-based studies are discovering support for the ideologies of the Maharishi Effect, which demonstrate that group mediation and consciousness has the power to alter the collective gathering as well as the greater society—everything from inducing states of deep bliss to reducing citywide crime rates.

Whether you believe that group chanting or meditating can transform urban living into utopia (or something closer to it), you can learn a lot about personal endurance from mindful application of yoga and running. Zoe’s parents fled Cuba in search of freedom for her family. Today, when she practices, Zoe still carries the same message. “Whether I’m hitting the asphalt or the mat it’s all about breaking conventions, doing the unexpected and redefining yourself.”

Back at 108, we’ve carefully set up our mats on the lawn, but MC Yogi is not having it. Instead, he calls all of us to the stage for a group selfie, and that’s how we start our opening practice. From the swarm of our collective body hugging tightly into a giant photo, I look out onto all the empty yoga mats. I think of every mat filled with a story of the yogi who stood there, and the stories every yogi was born into, and the stories unfolded on the land of mats. And two hours later, as we lie on those mats, releasing our final intentions in meditation, I think I truly believe that in this one moment, Miami is one language that we speak in our hearts, one place that can transform universally and irrevocably with the power of our thoughts. 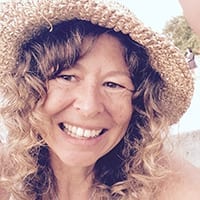 Julie Balter is a writer, yogi, and calculated risk-taker. Her career has spanned over 10 years as a Screen Actors’ Guild Florida Branch executive to her current role for LGBT-based marketing campaigns such as Kiss For Equality. She’s a former yoga instructor at Prana Yoga in Miami, the blog creator of Yogi After Forty, and a contributing writer for Wanderlust.com and Miami Herald’s Palette magazine. Find more at yogiafterforty.com.