This piece originally appeared on notahipstermom

If you’re a parent with an Internet connection, you’ve probably read the recent story about David Beckham and his four-year-old daughter’s pacifier. Earlier this month, Beckham was photographed out with his little girl, who had a pacifier in her mouth at the time. The UK’s Daily Mail then published a story in which “experts” criticized him for this parenting decision, saying that she may end up with “speech or dental issues” as a result of the pacifier use. They added that as a celebrity he is a role model, and people seeing the pictures will think that this is normal behavior when it’s not.

In a real-life move that I applaud wholeheartedly, Beckham took to Instagram to respond, defending himself and slamming the paper with the following statement:

“Why do people feel they have the right to criticize a parent about their own children without having any facts?? Everybody who has children knows that when they aren’t feeling well or have a fever you do what comforts them best and most of the time it’s a pacifier so those who criticize think twice about what you say about other people’s children because actually you have no right to criticize me as a parent …”

While I personally would not give my four-year-old a pacifier (we finally said goodbye to the paci when she was about two and a half), I am very much of the mindset that unless you suspect that the child is being abused, if it’s not your kid, you should mind your own business. There are so many ways to be a good parent, and unless you are living their life, there is no way to know the particulars. For example, we know that if a four-year-old uses a pacifier regularly it can cause dental issues and speech delay, and understandably, allowing that behavior could be perceived by some as neglectful. But how do we know how often Beckham’s daughter uses it? We don’t! Because she is not our child, and that is not our family.

But this kind of behavior—judging other moms and dads on their parenting decisions—is not exactly uncommon. As a mom I see it everyday, at work, among my friends and acquaintances, and of course online. The judging never stops, and the irony is that the majority of the judgement comes from other mothers. Why do we beat each other down when we are all out there working the most difficult and essential job there is? It makes no sense, but I see it play out in front of me on social media nearly every day. The following are five things I constantly see moms getting judged on by other moms.

Did you have an epidural? Be prepared to defend yourself! I mean, was it really worth putting your unborn child at risk for your own selfish reasons? Like what, you couldn’t handle a little pain when women have been having babies without drugs for centuries?

Do you bottle-feed your child? If so, you will almost certainly be called selfish, especially if it isn’t required by medical necessity. Meanwhile, if you breastfeed, you will be judged on how long you nurse (too short and you don’t have the baby’s best interests at heart; too long and you’re a freak), and whether you do so in public rather than hide in a bathroom.

Do you make your own baby food for your little one? If not, you obviously don’t care about your baby’s health and nutrition. And if so, well, you clearly have a lot of time on your hands.

Did you use the cry-it-out method to help your baby learn to sleep through the night? You’re freakin’ evil and have caused your baby mental and emotional scars from which they will never recover! But if you co-sleep with your baby, you’re a crunchy-granola who’s raising a future leech on society.

Do you have another job in addition to being a mom? Well, you’re selfish to put your career first when your priority should be your child. Double that if you choose to pursue your career ambitions even though you don’t “have” to—how nice for you that you get to spend time with adults! And if you stay at home with your kiddos and choose not to work an additional job? Well what do you do every day, lazy sloth? That must be the life!

Next time you feel yourself judging another mother, resist the urge. We may not all be in this together, but we can sure help each other on the way. 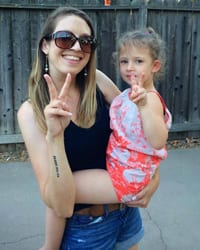 Ariana Brookes is a San Francisco-based copywriter who’s trying to be a cool mom but still, you know, legit. She loves old-school hip hop, 19th-century literature, tattoos, manicures, yoga, running, travel, and true-crime, and could happily eat Mexican food every day. You can read more of her work on her blog, notahipstermom, where she writes about her adventures in modern parenting, and follow her on Instagram and Twitter.