A couple months ago I was chatting on the phone with one of my very oldest friends while driving. As I prepared to run into my local coffee shop to grab my caffeine jolt, I turned around to my son, sitting in the back seat, and said to him, “I’ll be right back, OK?”

Now before all the parents and non-parents and grandparents and fur parents get their panties in a bunch, hear me out.

One of my biggest driving factors for starting Folk Rebellion was my son. I was scared for the world he’s being forced into (and not by my doing).

My career path has allowed me to meet some really smart folks who are studying what all this technology is doing to us. Crazy to think it’s only been eight years since iAnything came out. It’s so new that we can’t possibly begin to know all the effects, both good and bad. But the early guesses are that all the screens, constant communication, tapping instead of writing, social media, waterfalls of data, living virtually… it ain’t good.

BUT, there is something they do know. Because it started happening during the Reagan years, 1981 to be exact, and we can see the results unfolding right now.

News media was starting down the path of fear mongering for ratings, paired with Nancy Reagan’s “Just Say No” anti-drug campaign, and the 1984 launch of missing children on milk cartons—and it was basically like a perfect storm that had moms (and dads) everywhere shaking in their boots.

Besides being helpful, those platforms brought extreme fear and doubt of the world we live in and the people we live near directly into our homes. Quicker than you can say “no to drugs,” kitchens, which used to look out onto the neighborhood, were moved to the back of the house. From there mom could hold court over the kiddies as they played within the confines of the newly fenced-in backyard.

Even though as the Free Thought Project states:

When looking at the most recent statistics, there is roughly a 1 in a million chance of your child being abducted in a ‘stereotypical’ manner; meaning the nightmare-caliber crime involving a stranger or slight acquaintance who whisks away a child with the intention of holding him for ransom, keeping him, or killing him.

Or, to put another spin on it, your child is 700 times more likely to get into Harvard than to be the victim of such an abduction.

The results of the ’80s fear movement? Crime went down, like way down. YAY! It also gave birth to a generation of kids who are scared, have never been offered the chance to take a risk (and learn from it), hand-held everywhere… even into their job interviews.

The Atlantic published an amazing article last year, called “The Overprotected Kid,” on the changes in the parent-child relationship over the past 20–30 years. The article points out that parents are more overprotective than ever, despite our kids being arguably safer than ever:

When my daughter was about 10, my husband suddenly realized that in her whole life, she had probably not spent more than 10 minutes unsupervised by an adult. Not 10 minutes in 10 years.

It’s hard to absorb how much childhood norms have shifted in just one generation. Actions that would have been considered paranoid in the ’70s—walking third-graders to school, forbidding your kid to play ball in the street, going down the slide with your child in your lap—are now routine. In fact, they are the markers of good, responsible parenting. One very thorough study of “children’s independent mobility,” conducted in urban, suburban, and rural neighborhoods in the U.K., shows that in 1971, 80 percent of third-graders walked to school alone. By 1990, that measure had dropped to 9 percent, and now it’s even lower. When you ask parents why they are more protective than their parents were, they might answer that the world is more dangerous than it was when they were growing up. But this isn’t true, or at least not in the way that we think. For example, parents now routinely tell their children never to talk to strangers, even though all available evidence suggests that children have about the same (very slim) chance of being abducted by a stranger as they did a generation ago. Maybe the real question is, how did these fears come to have such a hold over us? And what have our children lost—and gained—as we’ve succumbed to them?

What is MOST FEARFUL (and the actual point of this very long article) is how quickly the scales are sliding in a direction where, legally, you won’t have that choice anymore.

Cue this article that made Yahoo’s homepage:

A Maryland family is under investigation for child neglect this week after allowing their kids, ages 6 and 10, to walk together, but without adults, to neighborhood playgrounds.

“The world is actually even safer than when I was a child, and I just want to give them the same freedom and independence that I had — basically an old-fashioned childhood,” she said. “I think it’s absolutely critical for their development — to learn responsibility, to experience the world, to gain confidence and competency. I think what CPS considered neglect, we felt was an essential part of growing up and maturing. We feel we’re being bullied into a point of view about child-rearing that we strongly disagree with.”

Or this one: Rise of the Nanny Police State: Town Governments Across the US Ban Sledding

Or this one: Dad Charged With Child Endangerment After Son Skips Church To Go Play

Or this one: Working Mom Arrested for Letting Her 9-Year-Old Play Alone at Park

Or this one: Boy, 11, Plays Basketball in Own Yard as He Awaits Delayed Parents. Cops Take Him & Brother Away for a Month

I could continue, but I won’t. You get the picture.

What if we take that essentially wasted worry and instead fear the impending loss of certain parental liberties?

What if we turn the tables and trust in ourselves again?

What if this generation is the one that is no longer afraid just because we were told to be, even when the facts don’t match up?

By all means be smart. Follow your gut and intuition. Be a parent. Not a parent? Be helpful…it takes a village. Would you call 911 on another parent instead of standing guard while they ran inside for Tylenol Jr?

But what if we let these kids be kids the old fashioned way? What if we let them be alone and trust them to grow? Doesn’t a plant in the shade grow less than a plant with a clear view of the sun?

It’s hard. I fail more times than I succeed. But I am trying to step outside comfort zones of norms we’ve been told are normal. Hopefully with time and age I get better and his place to roam gets larger.

I’m not saying moms and dads everywhere should start leaving their kids locked in cars every time they can.

All I am saying is let’s SHIFT the way we see our world.

UPDATE: Here’s an excerpt from a phone call from my upset mother after this article was originally published.

Mom: “I heard about your article. YOU CAN’T DO THAT JESS!”
Me: “Mom, yes I can. It was 3 feet away.”
Mom: “It’s not safe.”
Me: “I could see him. We were making silly faces at one another.”
Mom: “No, but you can’t, these are different times now. What if a stranger came up and punched the window and smashed it before you could get to him and grabbed him and ran away?”
Jess: “Mom, read my article.”

Photo of the author and her son. 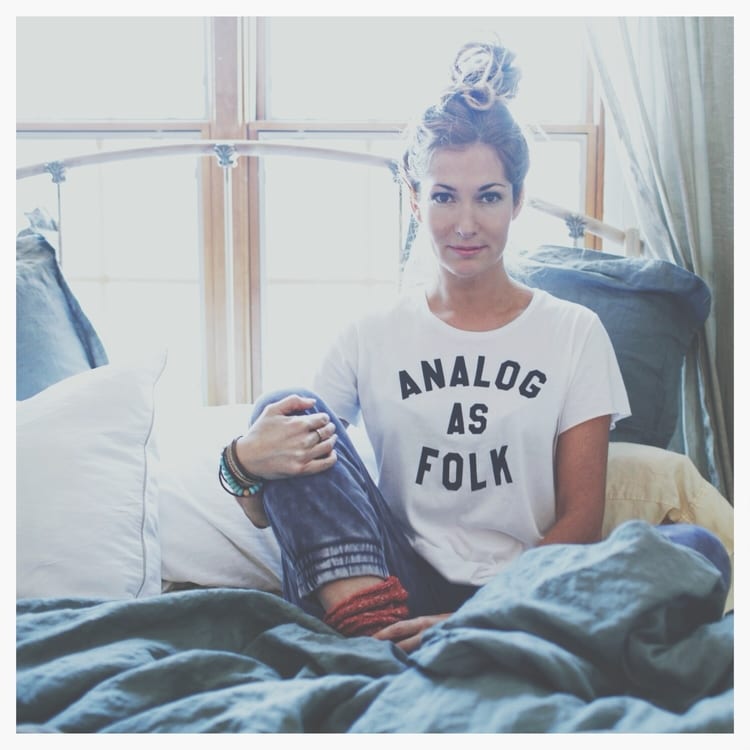 This essay was originally published on Folk Rebellion, a media-concept-meets-retail-outfit launched by Jess Davis in 2014. Through Folk Rebellion’s content and products, Jess champions a return to the offline, personal interactions we’ve lost since the dawn of the smartphone. Find out more by visiting folkrebellion.com.