A caretaker in the Valley of Bears, Frank is a conservation officer who ensures safe passage for Canada’s indigenous animals. Masters at survival in a harsh Canadian habitat, these creatures do not understand land rights and property lines—their focus is food. Though they are able to withstand and survive Mother Gaia’s pranks, human roads and imposed boundaries can become death sentences for these majestic animals.

Stepping around a large spruce tree, I see him coming down the trail toward me. A side breeze prevents him from smelling me. He stops a few bounds away and stares… There is little for him to fear. He is in his prime. Raising his nose, he tests the air… To identify me… He emits a low growl, indicating that now would be a good time for me to clear his path. Turning away could provoke a charge. I stand rigid.

When their search happens to cross our imaginary lines, Frank must sometimes aim his rifle at the animal he swore to protect. More often securing the land we claimed rather than an animal’s rights in its ancestral land, Frank’s circumstance may seem impossible to bear.

Bounding forward in full charge, a roar bellows from him. I rush forward. Rising just before impact our chests slam… Open mouths clash… Front paws swing… Growls and roars explode from both of us… Branches break and shrubs are pulled up and destroyed as we battle back and forth.

I first met Frank at a yoga class I was teaching. It’s strange, now, to think that this man—who aims a rifle at bears—would bring such a calming presence to my class. But Frank is a shaman and is at peace with his task. He weaves his experiences into sacred tales of adventure, who is able to educate us about wild animals so we can begin to share this land. Shamanism is a mysterious and ancient practice that explores the magic of our existence, through Earth rituals, universal traditions, and animal spirit guidance. As such, shamans are stewards of nature who share their wisdom to guide humanity to live in balance with Mother Nature. The Shaman conveys his message like spiritual mist that stimulates a deep grounding force rooted into our earth’s ancient past.

The front of his body swings from side to side, showing his massive front shoulders. The prominent hump. The thick powerful neck. His hair rises, creating an enlarged impression. Proclaiming his strength and dominance. His lack of fear. Lack of concern.

I admire Frank for his quiet presence and proud resolve; I often wonder how he maintains balance in a life surely clouded in unrest and strife. His plight seems mighty next to many of our modern day grumblings of hardship and imbalance.

Though I’ve long known that my yoga practice connects me to an internal, higher consciousness, I was unaware of the shallowness of my spiritual connection. While I unite wholeheartedly to human consciousness, forgotten was my association to nature, animals, plants, and Earth. An external realm of consciousness waited patiently for me to discover it and its capacity to complete my soul. Frank brought Gaia into my studio, shifting my internal focus to her great power.

As yogis, we should all be caretakers and stewards of Mother Earth. While yoga encourages a harmonious relationship among humans, a shaman’s perspective balances this equation, and connects us to our ancient roots of existence.

Excerpts from Boundaries, one of a collection of short stories from Buffalo Feathers & Dragon Bones, by Frank de Boon, Shaman and Conservation Officer from Fernie, British Columbia, Canada. 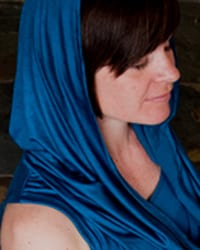 Marlene is the Movement Facilitator at the Castle on First, a Fernie Yoga warrior, a Kinesiologist, and lover of life. She specializes in body rehab through movement, and is currently working on her first book entitled A Castle without a King or Queen.