We live in an increasingly complex world. Even as the number of people seeking to live mindfully continues to rise, our world remains mired in inequality, intolerance, and injustice. In the quest for peace, truth, and wellbeing, we as a mindful community cannot stay silent. It’s time to turn our personal practice outward and participate. Together we can reach a tipping point for the change we want to see.

The principles of yoga and mindfulness encourage us to turn inward. When we calm our minds we are able to react compassionately. When we focus our energy on tension in our physical body, we are able to create space and healing. When we study the great works of spiritual leaders, we are able to accept the transience of existence and are empowered to seek truth.

We express personal mindfulness in the modern world through regular yoga practice, meditation retreats, and our everyday purchasing choices. But we can’t ignore the context of our times, or the social framework of our country. Leading a private life of mindfulness is powerful, but it is when we turn this mindfulness outward that we become a catalyst for meaningful change.

Why the Time Is Now

“Wellbeing” is the state of being healthy in both body and mind. To be well in our physical selves, we need access to clean drinking water, healthy food, and shelter. To be well emotionally, we need social engagement, room for spiritual pursuit, intellectual stimulation, and, to perhaps a lesser degree, occupational satisfaction.

When broken down, the definition of wellbeing sounds a lot like life, liberty, and the pursuit of happiness. It’s no great leap to see America’s founding documents as prescriptions for wellness—they are, after all, a blueprint for the American dream.

Renowned author, speaker, and political activist Marianne Williamson agrees that our country—and the American dream—were founded on the ideals of mindfulness. And yet our country was also founded within the constructs of genocide, slavery, institutionalized racism, and the oppression of women and many others.

Recognizing this irony—admitting this complexity—is the first step in overcoming it, in creating positive change. “A mindful life is one that is aligned with the consciousness with what is most true,” Williamson says. “Life is complicated. Truth is not.”

Working within this truth to resolve these ironies is what has led generations in the fight to end slavery, to give women the right to vote, to introduce legislation that legally (if not yet in practice) guarantees civil rights for all Americans, to ensure that all people can marry whom they choose. “The beauty of this country is that over time we have the ability to self-correct,” Williamson says.

The fight now is to change the current American system that she believes echoes the aristocracy America was founded against. It is a system, she says, that siphons off resources and opportunity to a select few. Opportunity is like blood flow—it needs to be circulated in society in order for its positive effects to be felt in any real way.

Prince Ea, an artist, activist, and founder of Make SMART Cool (an initiative to promote positive social change) puts it bluntly: “People living in poverty aren’t doing Kundalini yoga or looking for vegan options.” Peace may be an inside job, he says, but only when your basic needs are met are you able to begin working toward it.

The road to change is never easy, and it’s as important now as it’s ever been. A nation is nothing but a group of individuals, says Williamson. If we individually have clues as to what can heal our souls, we too can heal a nation. “We are heirs to great changers, to a great legacy,” Williamson says. “That’s why I’m so excited about our tribe getting involved.”

Changing the System by Working Within It

For Kerri Kelly, a coach, speaker, and founder of CTZNWELL (a nonprofit working to close the so-called “Wellbeing Gap”), mindful politics consists of two parts: the issues that reflect our values, and how we participate to promote these issues.

“There’s a crisis of connection in this country,” she says. In the 2012 presidential election, the voting rate among adults 30 and older was about 66 percent, and down to 45 percent among young adults ages 18 to 29. This is a staggeringly low voter turnout for a developed country. Kelly believes that this isn’t only embarrassing on a global political stage, it’s harmful. “Your vote counts when you don’t vote,” she says.

When we make conscious choices that support the issues we care about, we are being mindful. Choosing to buy organic food and support your local farmers market helps to create demand for responsibly-grown food. Choosing to buy clothing not made in sweatshops, or buying from companies that pay their employees fair wages, puts a dent in corporate greed. There’s no doubt that this matters. But to Kelly, this is only the beginning.

To engage in politics—the system through which we take care of one another—is to bring mindfulness outward. To participate, to speak out, is to address the complexities of our modern world, such as food policy, institutionalized racism, environmental reform, criminal justice, and poverty.

We cannot hide behind a sense of oneness if we are being exclusionary. To be inclusive is to stand up and engage, to call injustices unjust, and to demand political action so that everyone has access to the conditions—to the choice—of being well.

For Rep. Ryan, food policy is the convergence of all the issues that face our country right now. “Whether it’s education, the long-term health of our society, long-term health care costs; whether it’s the environment, how we grow the food, raise the cattle, the meat that we eat: This is really where all these issues come to pass,” he says.

It may seem idealistic or reductive to say that the way to revolutionize and revitalize the country is through food policy. But, plain and simple, food is an essential building block of life. What we put into our bodies very tangibly becomes the driving force of our nation. If we put bad stuff in, we’re only going to get bad results.

A mindful America is one in which we shift the system so that we’re subsidizing healthy foods, ensuring that fruits, vegetables, and lean meats—non-processed products—are accessible and affordable. The next step, according to Rep. Ryan, is to expand markets for these foods.

“We pay billions of dollars in our country through public institutions purchasing food—whether it’s our schools, our universities, our prisons, our government buildings,” he says. If these institutions alone made a commitment to purchase healthy food, it could initiate radical change.

Rep. Ryan says that Ohio State University’s pledge to spend a percentage of its food budget on locally-sourced fruits, vegetables, and lean meat is a good example of this. “Local farmers now have a huge incentive to begin to shift their crops from, say, corn to other produce,” he says. “Imagine if all the schools K–12 in the same region did the same thing, and all the prisons, and all the private colleges. You can begin to see how a market can be created for farmers to move in that direction.”

Mike de la Rocha is an influential speaker, writer, and artist who has dedicated his career to advancing the causes of social justice and criminal system reform. He believes that these issues are at the intersection of poverty, education, unemployment, and racism.

Imagine, he says, if we took just a portion of the nearly $80 billion the United States spends on mass incarceration annually and applied it to education, treatment, and victim services. In a country where one in every 28 children has a parent behind bars, “the opposite of poverty,” de la Rocha says, “is justice.”

But how to seek that justice? There are two levels, according to Rep. Ryan: through policy legislation and community involvement. “That’s what I’m trying to do,” he says, “to make people aware that they have to be involved in the political process. You have to be engaged. You have to be registered to vote. You have to hold your legislators accountable so you don’t just vote for the status quo policy that you’re getting right now.”

The other way to enact change is to be organized at a grassroots level. According to de la Rocha, there are three ways that an individual can work together at the community level: 1) Share your own personal story about how the issues affect you and why you believe in change; 2) Get involved with a local organization, wherever in the country you live; and 3) Open your doors and your resources to the people on the front lines of these social movements.

He likens our potential to change the system to an African proverb: All babies come into the world with their hands clenched. We hold our gifts and our talents in those clenched fists. As we grow into adulthood, the trick is to open our hands, so that we both give of our own unique talents and gifts, and are able to accept those of others. That’s what true political change in America looks like: An ability to share our gifts and talents of mindfulness, and to encourage others to do the same. “We are the walking manifestation of what we can create in the world,” de la Rocha says.

It’s not as revolutionary as it sounds. Other countries are already traveling this path. Rep. Ryan cites the Mindful Nation UK report issued by a parliamentary party in 2015. He says that policy-wise—with universal health care, child care, and education—Nordic countries are also doing a good job allowing people access to resources that help them develop individual talents.

“To me, that’s it,” he says. “Do you have access to the kind of diet, to the kind of practices and techniques that will allow you to meet your full potential? With that full potential, you’re able to really develop all of your talents to live a full and vibrant life. A mindful nation is one that allows that to be available—to all its citizens.”

To pledge to vote—mindfully—and to weigh in on the political issues that concern you most, take the CTZNWELL Vote Well Pledge.

Some quotes in this article were excerpted from lectures given at the first Mindful America event, a conscious town hall held at Wanderlust Hollywood in January 2016. Join the conversation at wanderlust.com/mindful-america.

Lisette Cheresson is the managing editor of Wanderlust Media. 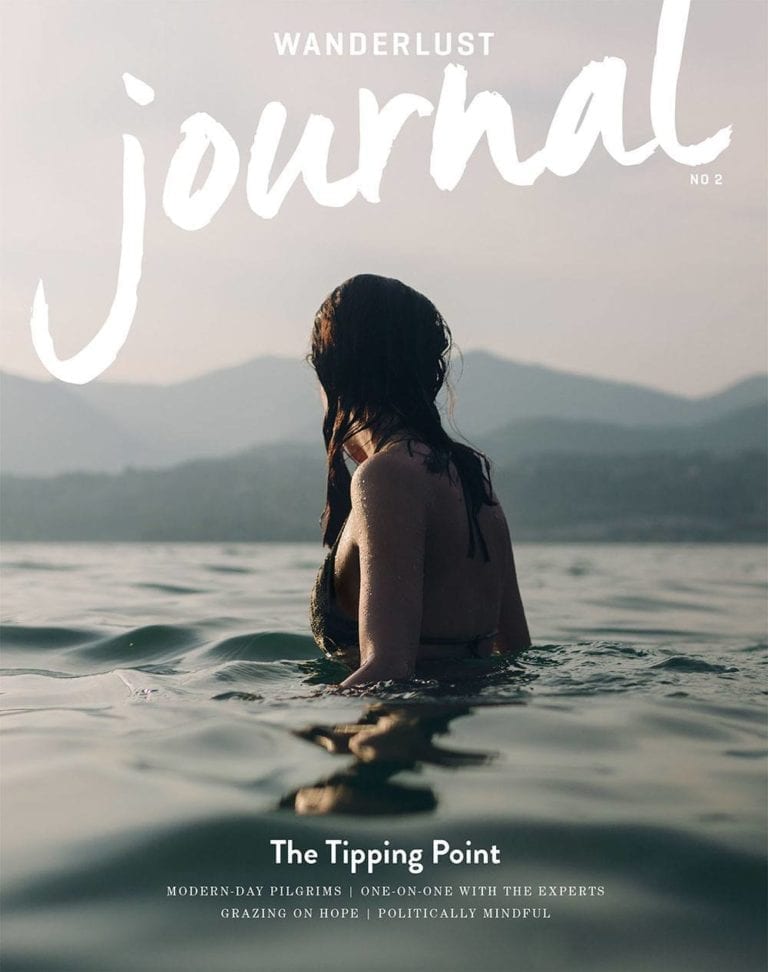 This article appears in Volume 2 of the Wanderlust Journal, available at 2016 Wanderlust Festivals, 108 events, and select partner studios. Find more stories from this issue here.