Skip to Main Content
Mary Beth LaRue is just one teacher you can learn from with Wanderlust TV.

Practice at home with the all-new Wanderlust TV! For just $9.99 a month, you can Wanderlust anywhere with your favorite teachers, flows, and DJ-powered classes.

“Inhale to prepare, exhale to step or float back, Chaturanga Dandasana. Inhale Upward Facing Dog; exhale Downward Facing Dog. Step your right foot forward in-between your hands and spin your back heel down, inhale arms up and exhale to open to Warrior II.” … YAWWWN.

Has your practice become so stagnant and routine that you’ve found yourself uninspired to make it to the mat? Do you find yourself going through the motions during your 6pm vinyasa flow, glimpsing at the clock as you anticipate predictable cue after cue from your beloved teacher, looking ahead at what’s for dinner or just wanting the whole thing to be over and done with?

Sound familiar? It doesn’t have to be this way, and the solution might not be what you think. The key isn’t necessarily to continue to seek out the hottest or hippest or most cutting-edge teacher who keeps things fresh with creative flair and a killer playlist. The secret to rekindling your love for the practice lies within the inherent qualities of the practice itself: acceptance of what is, and taking skillful action. 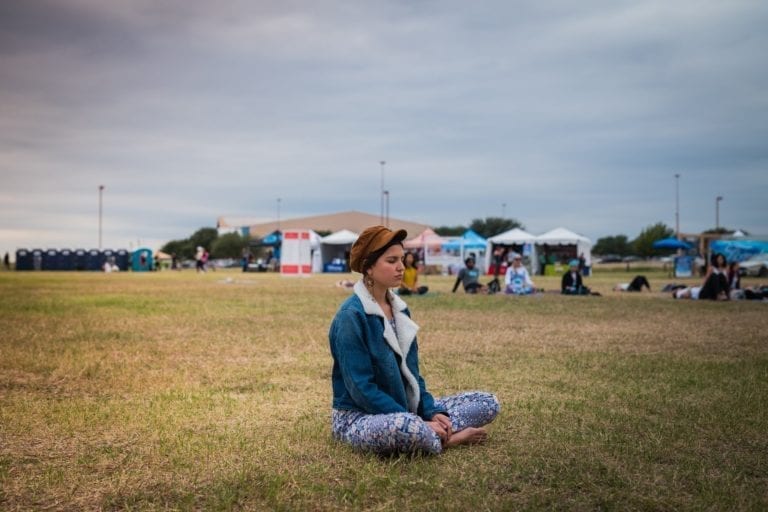 Wait…what? If you thought yoga was about sweat and strength and flexibility and achieving the fullest expression of a pose, well, you’re not alone. Many practitioners have expectations about what they think a practice should be or should look like. But placing expectations on a particular outcome of a practice will only lead to disappointment and dissatisfaction.

Yoga, after all, is now—not the future, not what has already happened, but developing clear insight of the present moment. Yoga is not viewing life through a distorted lens of perception, but seeing things as they are and being truthful about that observation.

Yoga is acceptance of the present moment, and the only real goal is to cultivate contentment. Expectation leads to discontentment.

This is not to say you should just stay as you are and remain stagnant. To practice yoga is to practice self-inquiry; to do what needs to be done to take action to move beyond the current state of affairs; to truly know yourself and to move in the ways which are wise to your body and mind. What if I told you that a practice does not even need to be strictly regimented, nor does your life does not need to revolve around yoga for you to become “advanced”—despite what social media might portray. Sometimes all that is really needed to reignite the spark is to just pause, sit, and surrender—to learn to become at ease with what is. That’s your practice. It’s not to long for the day you’ll be able to fold in half like a pancake and touch your toes, not to kick up into a handstand or a fancy forearm balance, not to put your leg behind your head. Yoga is now.

Find the true essence of yoga.

My teacher, Alexandria Crow, creator of Yoga Physics, a precise methodology that’s based on biomechanics and functional range of motion, agrees. Years ago, at the height of her popularity, she appeared on the cover of many magazines—sometimes with her leg behind her head—until she injured herself numerous times from, as she describes, poses that exploited her underlying hypermobility.

Since then, she’s been on a crusade to understand why. Why did this happen to her body, despite being a good student and advanced yogi, and why are so many other practitioners and teachers becoming injured—and just how and when the true essence of yoga became lost. She thinks that the spiking popularity and commercialization of the practice forced it away from the personal to cater to the general public, and is concerned that many practitioners are not as invested in the experience from an internal perspective.

“They aren’t being asked to truly inquire, to investigate for themselves and experience, and make personal choices,” she said. “They’re often just zoning out and following along.” Alex has described many offerings within the yoga landscape as philosophy layered over calisthenics, and will attest that in order to make something truly interesting and sustainable, it has to be personal—and you have to be invested.

Alex travels all over the country, talking to students and other teachers about this very problem. Why aren’t we truly investigating our yoga practice from a deep, internal level? She finds that the consensus is often the same: it seems that many people don’t understand that they can adapt and practice other techniques if and when the practice loses its magic, and that many people are misinformed about what makes them advanced or experienced as a yogi.

“I also think the lack of education about what a yoga practice truly is, what the intention is, and what the outcome of practicing is, that’s contributing to the lackadaisical attitude and the boredom,” she said. To Alex, advanced can actually mean doing nothing at all, so long as acceptance and contentment are part of that practice.

At the end of the day, all a yoga practice really is, is inquiry. Whether you’re lying on the floor or performing Chaturanga after Chaturanga, if the self-inquiry is there, then so is your engagement in your practice. The next time you find yourself dissatisfied or bored with your experience, ask yourself what it would take to recapture your attention. To make you invested again.

Maybe it’s slowing down, maybe it’s not. Perhaps it’s trying other forms of exercise, but if it’s the yoga which you truly seek—and I’m not necessarily referring to the physical postures, but the original teachings of the practice itself—then it could be time to go back to the basics. To be still. To sit in inquiry. To observe sensation. To make choices for your body from a place of intuition and wisdom. To do what it takes to fully experience the now, and to take skillful action within the present moment. (Here are some tips on how to get started.)

Yoga is ancient, but the poses are not. The word asana, which translates to “a seat,” was once the only posture ever practiced for those who sought enlightenment and transcendence.

Maybe we ought to remember this the next time we’re tempted to put our leg behind our head.

Andrea Rice is a writer, yoga and meditation teacher, and Wanderlust Festival presenter. Her articles and essays have appeared in The New York Times, Yoga Journal, The Wanderlust Journal, NY Yoga + Life, mindbodygreen, and SONIMA, among other publications. She has been teaching yoga since 2010, first in Brooklyn and Manhattan, and now in Raleigh, NC, where she currently resides. She is also co-authoring a book about the application of seasonal rhythms and yoga philosophy to modern life, which will be published by New Harbinger in early 2020. Connect with Andrea on Facebook, Instagram, and Twitter, and sign up for her quarterly newsletters on her website: www.andreariceyoga.com.