The yoga community has witnessed a very consistent parallel in recent years: as the popularity of yoga reaches a near-nauseating fever pitch, so has the need for real, tangible body, race, gender, and LGBTQ diversity in yoga media. Yet, when you Google image search the word yoga, it looks like a lot of the same person over and over again.

So what gives? Why isn’t this changing? And who’s responsible for the change?

Let’s break this down into a couple scenarios:

When you order a turkey (tofurkey) sandwich, but instead you receive a roast beef (tempeh) sandwich instead, do you:

A. Aggressively throw the unwrapped sandwich back at the counter, and, as lettuce flies every which way, call the shop owner a series of expletives.

B. Take the sandwich home and update your Facebook status, posting a photo of the sandwich and add in an FML for good measure.

D. Figure the sandwich preparer isn’t perfect and makes mistakes sometimes and politely ask him to remake the sandwich.

E. Just eat the sandwich and get over it. It’s a sandwich.

Let me give you another unrelated but worthwhile scenario:

When you see a photograph of a lithe, white woman in barely-any clothing, doing an advanced yoga pose on social media, do you:

A. Comment saying, “this isn’t yoga” and “she needs to eat a sandwich” and scold the brand for always only showing the 1 percent.

B. Share the status on your timeline and invite your friends to join you in raising your pitchforks and torches as you storm the castle that is Mainstream Yoga Media.

C. Unfollow the brand and tell all your friends that Westernized yoga is garbage, that Americans have ruined it, and we’re all doomed.

D. Send an email or post a comment asking if the brand would be open to creating more diverse content, while offering your insights, energy and thoughts on how that could be done.

E. Keep scrolling. You have better things to worry about. Social media is not real life.

There are obviously many more possible choices in this situation (like posting, “Beautiful!”), but as the former social media manager of Wanderlust, I have statistics proving that a and b are two of the most common responses.

I’m not breaking any news by stating that social media and media in general can be a complicated, unruly beast. Studies have been released linking depression to our social media addiction. People will not stop arguing about whether or not posting a #yogaselfie makes you a narcissistic sociopath. People have a right to be upset and confused and the lack of diversity is deplorable at best. So much of the frustration is super understandable.

Truth is, there isn’t an easy, one-size-fit-all solution to the very real diversity problem. There is a level of responsibility on the part of brands and media organizations, yes absolutely. But how do you take real life action so you can see real life change?

Have more ideas? Want to share them with us? Please. We’re all ears. 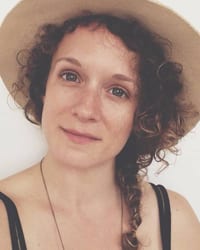 Tatum Fjerstad is short, sassy and sensitive. The former social media manager for Wanderlust thrives on helping people find their voice and shout it from the mountaintops. She teaches yoga in NYC, enjoys making strange computer noises at random, and dancing to hold music on her roof. Follow her on Facebook, Instagram and Twitter.