We’re proud to once again have teamed up with (RED) to fight AIDS. In 2019, for every purchase of a Wanderlust ticket, £1.08 of the retail price goes to The Global Fund to fight AIDS with (RED). That donation is enough to provide over five days of life-saving HIV medication. Together we can #endAIDS.

When you buy a ticket to a Wanderlust event, you are directly supporting the fight to end AIDS. The stories that follow showcase a few of the incredible people and programs that are impacted thanks to (RED)-supported Global Fund grants. All stories are courtesy of (RED), and used with permission.

“My favorite part is to help people out of their sickness, out of their pain”, says Nana, Senior Nursing Officer at Adabraka clinic, and a hero on the ground in Ghana. Nana works to council HIV+ women on how to stay healthy through pregnancy and keep their babies HIV-free through delivery and breastfeeding.

Nurses and community health workers are the backbone of the fight against AIDS, leading the charge to prevent and combat the stigma and structures that make fighting this disease such a challenge.

Nana has been a nurse for ten years, working to keep her community healthy and prevent the spread of HIV. Her strength, passion and conviction are evident in her work. “I see people outside they call me ‘Auntie Nurse’, I look back and they hold up their toddler and say; ‘this is my son’, their babies are negative. That’s all, that’s my joy.” Though there is greater public acceptance of people living with HIV in Ghana than there was previously, there remains high levels of stigma and discrimination against them. “It is possible to end mother to child transmission, but there should be more education and HIV shouldn’t be shrouded in secrecy, and fear and all that”, says Nana, “It starts with us to speak.” 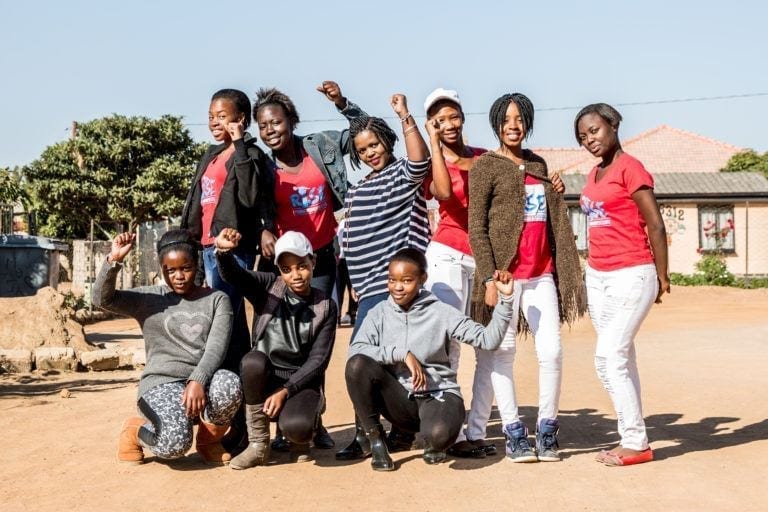 Despite gains in treatment coverage, significant challenges in South Africa remain in the fight against AIDS. South Africa is home to 7.7M people living with HIV, the highest number worldwide. More than 60% of this population are female, as women and girls are disproportionately impacted by HIV and account for nearly 400 new infections daily.
Rise Young Women’s Clubs are part of the flagship program of Soul City, a recipient of (RED) supported Global Fund grants. The Clubs were launched as a response to high rates of HIV among adolescent girls and young women living in informal settlements in South Africa.

The peer-led clubs aim to build resilience among young women and link them to essential health services such as HIV testing and counseling, antiretroviral therapy, contraception and other sexual reproductive health services. Members are also equipped with skills to deal with socio-economic factors that increase young women’s vulnerability to HIV—such as intergenerational and transactional sex. The clubs also link young women to educational and economic opportunities and provide a structure for young women to support each other in navigating the socio- cultural drivers of risky sexual behavior in their communities. 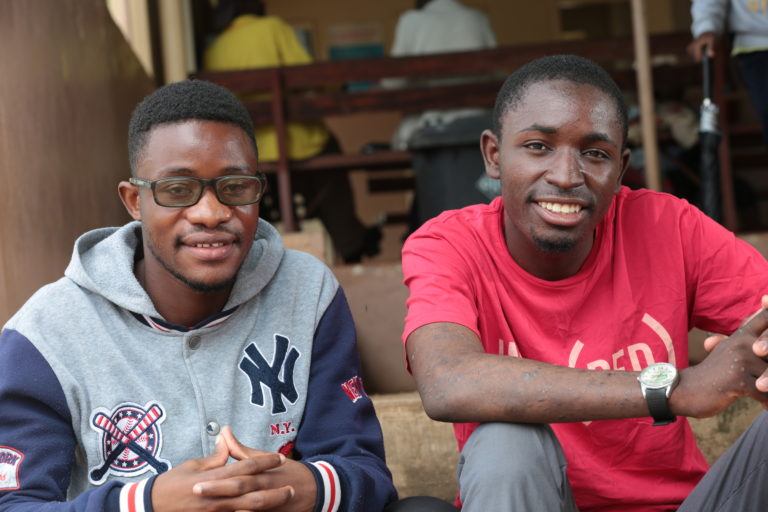 Meet Leonard and Peleg, two young men from Zambia, who are not letting HIV stand in the way of their dreams. “Every day I have to add value to my life, that’s one of my goals” says Leonard, a law student and HIV peer educator. Peleg, a medical student, fellow peer educator and Leonard’s best friend has similar aspirations. Peleg says he wants to “make a major impact in the medical community,” and perhaps set up a hospital of his own.

Leonard and Peleg serve crucial roles as peer educators. They’re working to ensure HIV+ teens stay healthy and protect themselves, so that the virus ends with them. As medication helps HIV become a manageable disease, HIV educators face a new challenge: getting people to adhere to their medication. “There is that temptation that one has, of wanting to quit taking the medication, so that’s the thing I always emphasis, don’t stop taking medication. Because the moment you do that, the immunity drops,” warns Leonard.

Leonard and Peleg see themselves in the young people they advise. They are a source of knowledge and support for kids living with HIV. “We’re in a better place to advise them,” says Peleg. “We are helping the kids to live proper, normal lives regardless of their HIV status.” Leonard and Peleg have big plans for their future, and for a healthy, AIDS-free Zambia. 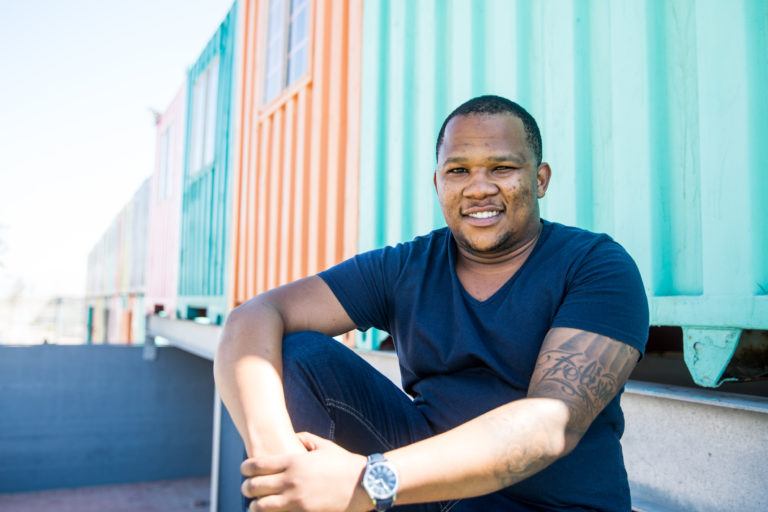 While it’s priority to address the inequalities that put women and girls at increased risk of HIV, we must also work with men and boys to end this epidemic. Men in sub-Saharan Africa are 20% less likely than women and girls to know their HIV status, and they are 27 percent less likely to access treatment. Enabling men and boys to get tested and start and stay on treatment can ultimately lead to a decline in HIV infections among women and girls, and help to disable harmful gender norms that contribute to the epidemic.

With support from The Global Fund and the Desmond Tutu HIV Foundation, Ndumiso Madubela oversees the Men’s Dialogues, a program focused on providing men in high-disease burden areas in Cape Town with access to stronger health education and intervention programs. The aim is to help young men understand the consequences risky sexual behavior and to take control of their actions. One of Ndumiso’s biggest challenges is that many men who are at a high-risk of contracting HIV don’t perceive themselves to be. By providing at risk men with knowledge about HIV/ AIDS, giving them a safe space to discuss social and gender norms, and providing access to testing, Ndumiso is helping to create change to empower a generation of respect and equality. 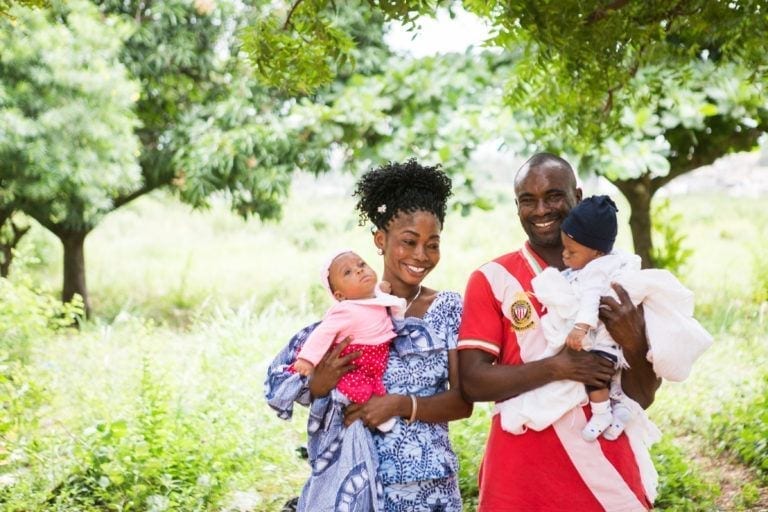 Preventing mother-to-child transmission (PMTCT) of HIV is a crucial piece to ending AIDS as an epidemic by 2030. PMCT efforts must scale up to ensure that expectant and breastfeeding mothers have access to HIV and that those living with HIV adhere to treatment. Of the 1.3 million women living with HIV who need PMTCT treatment, 90% of these women are in sub-Saharan Africa.

Deborah is a patient at TEMA General Hospital in Ghana, which receives support from (RED)- funded Global Fund grants. When Deborah was pregnant with her first child in 2009, she went to TEMA for her routine maternity exam, which included an HIV test. When Deborah found out she was HIV+, the staff at TEMA not only counseled her through her diagnosis, but also provided care and treatment to ensure her baby was born HIV-free.