Light Watkins is the host of the 21-Day Meditation Challenge on Wanderlust TV, has appeared on Wanderlust stages from Los Angeles to London, and is the author of three books: Inner Gym, Bliss More, and the brand new, Knowing Where to Look, of which the following is an excerpt. 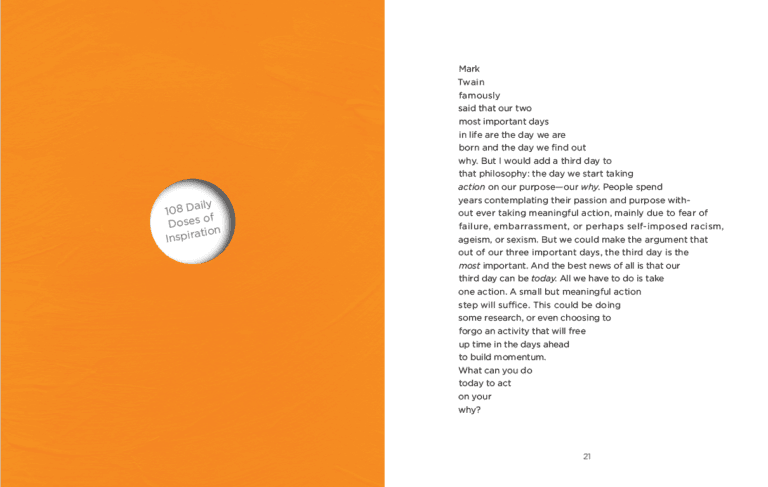 Mark Twain famously said that our two most important days in life are the day we are born and the day we find out why. But I would add a third day to that philosophy: the day we start taking action on our purpose—our why.

People spend years contemplating their passion and purpose without ever taking meaningful action, mainly due to fear of failure, embarrassment, or perhaps self-imposed racism, ageism, or sexism. But we could make the argument that out of our three important days, the third day is the most important. And the best news of all is that our third day can be today. All we have to do is take one action. A small but meaningful action step will suffice. This could be doing some research, or even choosing to forgo an activity that will free up time in the days ahead to build momentum.

What can you do today to act on your why?

Pianist, Herbie Hancock, spent five years as Miles Davis’s protégé. During their very first performance together, they were in the moment, playing off each other, improvising. Then Hancock accidentally hit a wrong chord. 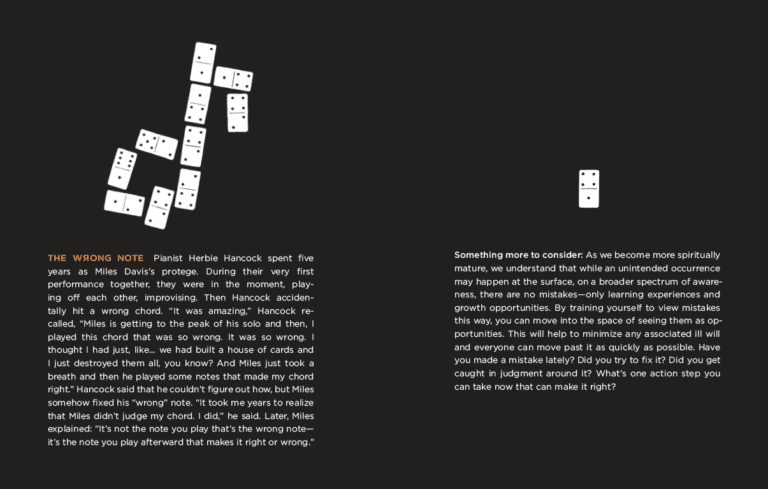 “It was amazing.” Hancock recalled, “Miles is getting to the peak of his solo and then, I played this chord that was so wrong. It was so wrong. I thought I had just, like… we had built a house of cards and I just destroyed them all, you know? And Miles just took a breath and then he played some notes that made my chord right.”

Hancock said that he couldn’t figure out how, but Miles somehow fixed his “wrong” note. “It took me years to realize that Miles didn’t judge my chord. I did,” he said. Later, Miles explained: “It’s not the note you play that’s the wrong note—it’s the note you play afterward that makes it right or wrong.”

Something more to consider: As we become more spiritually mature, we understand that while an unintended occurrence may happen at the surface, on a broader spectrum of awareness, there are no mistakes—only learning experiences and growth opportunities. By training yourself to view mistakes this way, you can move into the space of seeing them as opportunities. This will help to minimize any associated ill will and everyone can move past it as quickly as possible.

Have you made a mistake lately? Did you try to fix it? Did you get caught in judgement around it? What’s one action step you can take now that can make it right?

An old man, a boy, and a donkey were heading into town. The boy rode on the donkey while the old man walked. As they went along, people remarked that it was a shame for the old man to be walking and the boy to be riding. The man and boy thought maybe the critics were right, so they switched positions. 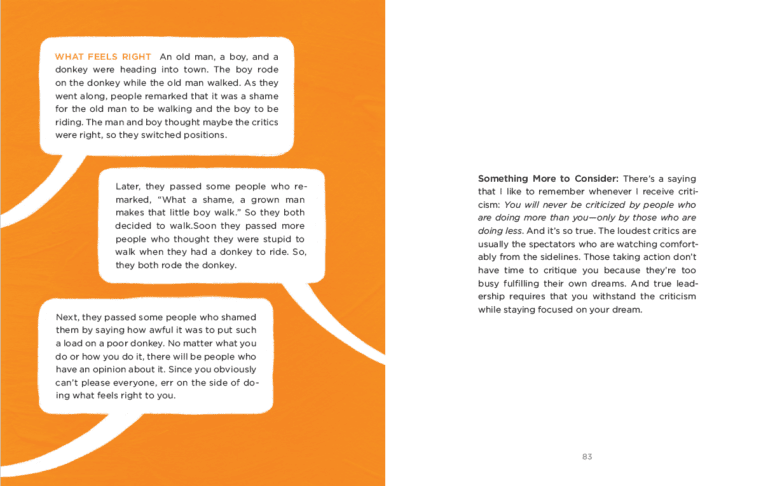 Later, they passed some people who remarked, “What a shame, a grown man makes that little boy walk.” So they both decided to walk. Soon they passed more people who thought they were stupid to walk when they had a donkey to ride. So, they both rode the donkey.

Next, they passed some people who shamed them by saying how awful it was to put such a load on a poor donkey. No matter what you do or how you do it, there will be people who have an opinion about it. Since you obviously can’t please everyone, err on the side of doing what feels right to you.

Some More To Consider: There’s a saying that I like to remember whenever I receive criticism: You will never be criticized by people who are doing more than you—only by those who are doing less. The loudest critics are usually the spectators who are watching comfortably from the sidelines. Those taking action don’t have the time to critique you because they’re too busy fulfilling their own dreams. And true leadership requires that you withstand the criticism while staying focused on your dream.

The other night, I had to force myself to work out for about the millionth time. One would think that after twenty-plus years of working out, it would be easier to make the time. But on most days, I still have to plead with myself to move. And it’s often the same excuses: I’m too tired, I have more important things to do, blah blah blah. 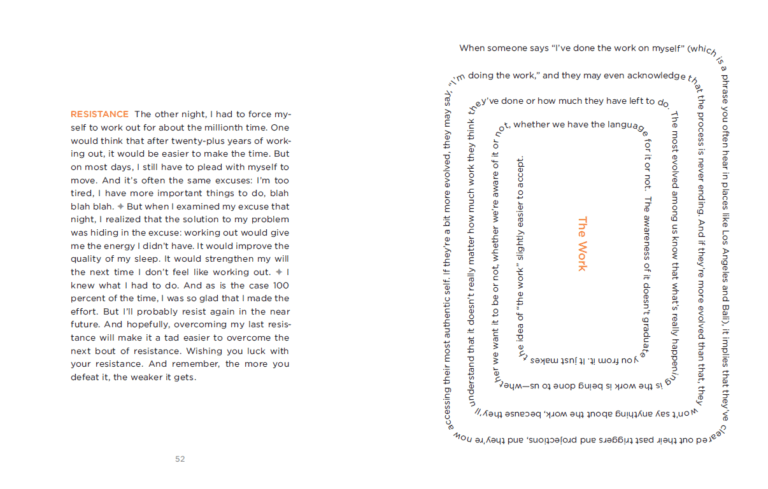 But when I examined my excuse that night, I realized that the solution to my problem was hiding in the excuse: working out would give me the energy I didn’t have. It would improve the quality of my sleep. It would strengthen my will the next time I don’t feel like working out.

I knew what I had to do. And as is the case 100 percent of the time, I was so glad that I made the effort. But I’ll probably resist again in the near future. And hopefully, overcoming my last resistance will make it a tad easier to overcome the next bout of resistance. Wishing you luck with your resistance. And remember, the more you defeat it, the weaker it gets.

When someone says “I’ve done the work on myself” (which is a phrase you often hear in places like Los Angeles and Bali), it implies that they’ve cleared out their past triggers and projections, and they’re now accessing their most authentic self.

If they’re a bit more evolved, they may say, “I’m doing the work,” and they may even acknowledge that the process is never ending. And if they’re more evolved than that, they won’t say anything about the work, because they’ll understand that it doesn’t really matter how much work they think they’re done or how much they have left to do.

The most evolved among us know that what’s really happening is the work is being done to us—whether we want it to be or not, whether we’re aware of it or not, whether we have the language for it or not. The awareness of it doesn’t graduate you from it. It just makes the idea of “the work” slightly easier to accept.

Excerpt from the book Knowing Where to Look: 108 Daily Doses of Inspiration by Light Watkins © 2021 Light Watkins, reprinted with permission from the author and the publisher, Sounds True, Inc. 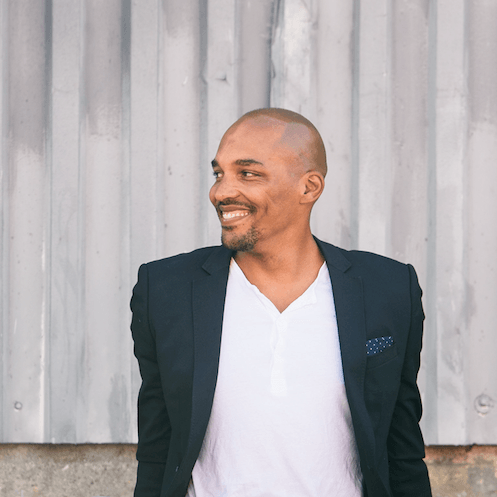 Light Watkins is the founder of The Shine Movement and author of Knowing Where to Look: 108 Daily Doses of Inspiration,  Bliss More: How to Succeed in Meditation Without Really Trying and The Inner Gym: A 30-Day Workout For Strengthening Happiness. He’s been active in the meditation and wellness space for nearly two decades, and he’s also given a popular TEDx talk titled Debunking The 5 Most Common Meditation Myths.