Award-winning chef Seamus Mullen knows the value of eating real, whole foods to fuel an active lifestyle. Not only is he an avid cyclist and yogi, but he also used food to heal himself from a crippling autoimmune disease. In this series — Eat to Move — he shares nutrition tips and an enriching array of recipes that combine plant-based ingredients that #GOTOGETHER in unusual and delicious ways. See all recipes »

I find that because I keep my sugar and carb intake low—making sure I only eat nutritious, slow burning carbs—that I don’t get nearly as peckish and hungry as I used to. But sometimes I do need a little bite, particularly if I’m working out or going for a long bike ride. One of my favorite things to do is make portable rice cakes that wrap up nicely in wax paper and slip into a pocket of my biking jersey:

In a rice cooker, combine sushi rice with 2 cups of water and 1 tbsp rice wine vinegar. Set to rice setting and cook.

Meanwhile, in a medium-sized sauté pan heat 1 tbsp olive oil over medium-high heat. Add the mushrooms and season with salt and the remaining vinegar.

Once the rice is cooked, transfer it to a bowl and fold in the mushrooms, nori, hijiki, chia seeds, sesame seeds, chopped cilantro, and soy sauce. Spread the rice onto a cookie tray covered with wax paper. Once cooled, cut the rice into 2” squares and wrap individually. 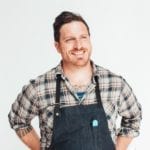 Seamus Mullen is an award-winning New York chef, restaurateur and cookbook author known for his inventive yet approachable Spanish cuisine, and a leading authority on health and wellness. An avid cyclist who raced competitively in his twenties, he was diagnosed in 2007 with rheumatoid arthritis, an autoimmune disease that forced him to rethink his relationship with food, and led to his first cookbook Hero Food, published in 2012. Learn more about Seamus »

Kashi believes that eating more plants can be a catalyst for a healthier life – which is why they’ll be sharing a variety of new plant-powered foods with festival attendees in 2016. By curating unique ingredients that simply #GOTOGETHER, Kashi creates foods that offer plant-based nutrition and taste amazing, too!