Whether it’s the salty spray, the endless blue, or the sounds of waves crashing on the shore, a trip to the seaside brings a calm that’s hard to find anywhere else. Unfortunately, we can’t always make it to the beach, for reasons both geographic and practical. So what can you do when you find yourself landlocked, seeking balance and miles away from the ocean? Turn to salt therapy and, specifically, salt yoga.

The Rich History of Salt Therapy

Salt yoga is based on the idea that exposure to salt is beneficial to health. While salt has almost always been lauded as a mineral that cleanses, balances, and heals, it wasn’t until the 1800s that dry salt therapy came into vogue. Early physicians in Europe and the Middle East noticed that salt mine workers typically possessed healthier constitutions and were less likely to fall ill in comparison to their above-ground counterparts. It was found that when salt was mined and removed from the earth, microscopic particles were released into the air and inhaled by the workers. Since salt is antibacterial, antifungal, antiviral, and anti-inflammatory, they deduced that the workers’ exposure to salt was the cause of their increased health. Seeking a way to capitalize on this new discovery, European scientists were determined to find a way replicate these beneficial effects outside of the mine. A few years later halotherapy was born.

Halotherapy is a holistic, drug-free alternative treatment where microparticles of salt are released into the air and inhaled. While the jury’s still out on whether or not it actually works, anecdotally it is said to improve the immune system, soothe stubborn skin conditions, destroy colds, and improve allergies. The idea is that when these tiny particles of salt are inhaled, they act like little sponges sucking up bacteria and mucus and flushing it out of the system.

Yoga teacher and Wanderlust contributor Elizabeth Crisci described her experience with halotherapy in a salt cave as deeply relaxing. “There was an almost tangible quality to the air in the salt room that felt similar to being at the beach, except clearer,” she wrote.

These benefits only increase when halotherapy is combined with the breath and movement of yoga. An article in Shape magazine explains that “Salty yoga also boasts [the benefits of halotherapy], combined with poses that help to build strength and flexibility in the primary and secondary muscles of respiration, thereby increasing—even more—breath capacity, oxygenation, endurance and performance.”

While you might think that this is just another trend, like SUP yoga or cat yoga, salt has long played a role in physical therapy and recovery. Most of us know how nice it is to slip into a warm bath of Epsom salts after a difficult practice—dry salt therapy is much the same.

What Can I Expect?

Most salt rooms are designed to be peaceful places of introspection. The humidity, air circulation, and temperature are all carefully controlled to provide a calm and soothing environment. Expect to be bathed in the warm glow of crystal lamps and pink Himalayan salt. Another great benefit of meditating or practicing yoga in a salt room is the increased presence of negative ions. While computers, electronics, and other modern conveniences are part of our day-to-day, they also give off a ton of positive ions. Although it sounds quite the opposite, these positive ions can throw our systems out of alignment and cause feelings of depression and irritability. Luckily, salt acts as a counterbalance; giving off negative ions that can re-balance our senses and bring feelings of joy and increased energy. Doing poses and meditations in this space, especially when integrating breathwork, benefits the body in ways beyond traditional yoga.

Where Can I Practice?

As it has gained popularity in the United State and abroad, many spas and wellness centers have added salt rooms to their services. Breathe Salt Rooms in New York offers both group and individual rooms for salt therapy (and is a favorite of Wanderlust mentor Elena Brower), and in Las Vegas, there’s Salt Room LV. A good old Google search should yield results no matter where you are in the world. 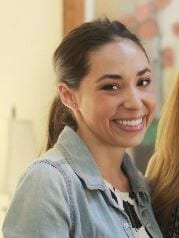 Nicole McLaughlin is a freelance writer living and working in San Diego. She focuses on healthy living, recipe development and exploring the role mindfulness plays in leading a balanced life. Sea salt and chocolate are her weaknesses, as is the promise of a good time. For more of her musing on life, the universe and everything creative, follow her on Instagram.