This piece is part of a month-long Wanderlust and YOGANONYMOUS series about self-love.

So I recently went through a heartbreak.

Trust was shattered, my self-esteem was shot, and I was left feeling like I didn’t know where I should go, or really, who I even was.

I didn’t feel whole—and had a hard time believing I was actually a complete person.

Beloved songs and everything from Netflix ads to Icees became triggers. Precious memories were no longer cherished, but painful.

But I knew I needed to move on.

As anyone who has experienced loss knows, this is easier said than done. I adopted mantras like “let it be” and, simply, “stop” to prevent my already analytic brain from going over the details of the past hours, days, weeks, and months.

I had to learn how to be kind to myself, and love myself—even the parts I perceived as “flaws.” Even the parts of me I secretly blamed.

On the bad days I tried to stay busy. Attempted to focus just on myself, and my health. I tried to eat, even when I didn’t care to. And I came to acknowledge and accept that I couldn’t exist with just one emotion.

I had to learn how to be kind to myself, and love myself—even the parts I perceived as “flaws.” Even the parts of me I secretly blamed.

If we can depend on anything in life, it is change. Change that is often unpredictable, and outside of our control. But the thing we can control is how we react to it.

So I made an effort to “lean into the good” when I was down, lonely, or starting to spiral. I grasped at things that made me feel excitement, even if I thought they were silly or materialistic. I accepted help from friends, family, myself, the universe—and yes, even home furnishing catalogs.

I focused on me. And I focused on getting out; closing the door on the past literally and figuratively—being grateful it happened but leaving it at that while moving out and handing over my keys.

I moved in with friends, into a temporary, but safe, space. As I unpacked my things and tried to make a new “home,” I realized that in my journey my office chair had lost a bolt. It would still function, but I was unsure how to replace the piece, or if I even could. But the chair still worked. So I accepted that a part of it may never come back, and decided to just appreciate its place in my life for as long as it would function.

I didn’t think much of it at the time, and as the days progressed my heart went on the typical post-breakup trajectory. I made some tough decisions and I came to terms with the fact that there would be places, things, and even a pet that would never be “mine” or even “ours.” The choices that were made leading up to our end created a ripple in “our” universe. “We” could no longer exist, and I was left, supported by friends and family, yet feeling alone, and incomplete.

I accepted help from friends, family, myself, the universe—and yes, even home furnishing catalogs.

Then I realized something, slowly, but surely. It was I who had the power to see this as something completely destructive, or instead a catalyst for change—something unexpected on my life’s path, but not inherently bad.

There’s a quote by Helen Keller that goes: “When one door of happiness closes, another opens; but often we look so long at the closed door that we do not see the one which has been opened for us.”

I wasn’t going to miss it.

So, being my optimistic, well-intentioned self I opened the door to hope, picked up my baggage of vulnerability and uncertainty, and took the first step toward a new beginning.

For me this door led outside the brownstone I was staying in. And as I opened myself to the world outside—with music for my spirit in my ears, and a brave look on my face—I looked down. I’m not sure why, or what drove me to do so. I had come and gone before in the days that had passed. But when I looked down I saw something familiar to me. Something I had said goodbye to and didn’t expect back in my life.

I saw the bolt.

So I picked it up. And walked, standing tall, into my new chapter. The pieces were coming back—I just had to make peace with their absence to realize: I am already whole. 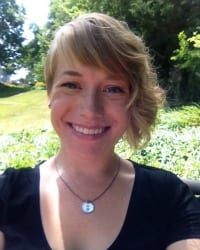 Caitlin Berens is an editor at Wanderlust Media. Previously she served as an assistant editor at Everyday Health where she helped launch Health Matters With Dr. Sanjay Gupta. Her work has appeared in Inc., Better Homes and Gardens, Billboard, and SELF. She loves cupcakes, laughter, good workouts, and bulldogs. Follow her musings on Twitter and Instagram.