In this series, we explore the application of esoteric truths in everyday life, with renowned teacher and Wanderlust presenter Swamiji. Learn from luminaries like him at a Wanderlust Festival this summer!

The Bhagavad Gita (the Gita) is one of the most popular and well-read books of wisdom in the history of humankind. It is embedded in The Mahabharata, a body of knowledge that contains 100,000 verses, which is the largest poem in the world. The Mahabharata is divided into 18 sections with the Gita set in the sixth section, called the Bhishma Parva. The term “Bhagavad Gita” literally means “Song of God.” It is a dialogue that took place between the Supreme Lord Shri Krishna and his devotee Arjuna, on the verge of the Mahabharata war.

The Gita not only provides profound philosophical understanding, it also describes clear-cut ways for implementing spiritual wisdom in everyday life. These “ways” are termed as “yoga.” Hence the Gita is also called “Yoga Shastra,” meaning the scripture that teaches the practice of yoga. It describes the various systems of yoga, such as Karma Yoga (the way of action), Gyan Yoga (the way of knowledge), and Bhakti Yoga (the way of love and devotion). Collectively they are pathways to guide individuals through life, illuminating the ultimate aim: the blissful union of the atma (the soul) with the Paramatma, God.

Many, when they hear the story of Arjuna and Shri Krishna in the Gita, wonder at the setting of this sacred teaching as it takes place just before a war is about to start. Some are concerned that it is advocating war. A teacher of Ashtanga yoga once wrote to me about this, asking me to clarify for her students how the principles of Ahimsa (non violence) fit into the teachings of the Gita. Acknowledging the Gita as an extraordinarily profound and subtle body of work, I will share a little of the explanation I gave her.

Arjuna is the leading warrior of the Pandava army, famous for his prowess with the bow and arrow. Yet, just before battle begins, he loses heart upon seeing the enemy and declares that he does not want to fight, that it is better he loses his life than take one drop of blood of the enemy, let alone kill them. In the opposition army of the Kauravas, Arjuna sees friends, cousins, and past respected teachers. He fears the war will destroy the moral fabric of society and he wants no part of it.

This is where the 700 verses of the Gita get underway, the starting point from which Shri Krishna explains the essence and meaning of life itself to Arjuna.

Due to his confusion and doubt concerning the war, Arjuna is told some startling truths: If he does not do his duty and fight, he will go against his karma because he has taken an oath to protect his community from tyranny and aggression. As a result he will sink into moral degradation and upon his death take birth in the lower regions. However, if he fights the war he will be doing his duty and will be following the path of virtue, ensuring a good future. Even if he should lose his life while fighting, still he will be rewarded with birth in the upper celestial regions.

But here comes the surprising thing: Shri Krishna explains that all of the actions just mentioned, whether they be karmically good or bad in nature, will bind him to suffering (to a greater or lesser extent) in the wheel of birth and death. Moreover, due to having lived uncountable lives, the flow of karma is endless—leading him, in individual births, to sometimes reside in the upper regions, sometimes in the lower regions, and sometimes in the middle region (earth). It is all impermanent, with the atma constantly on the move at the moment of death from one life to another. Most significant of all, however, is that by following any of these pathways, Arjuna will not be able to realize the blissful union of the atma (individual soul) with the Paramatma (the Divine One), which is the one true, ultimate aim of every individual soul.

He also learns that the atma is an eternal power of Shri Krishna. It was never made and can never be unmade. It is. Therefore he does not have the power to kill anyone, since the atma cannot die. What we call death is only the death of the human body that envelopes the atma, not the atma itself. Further, he learns that the actual time of departure of the atma from an individual human body (death) is governed by an individual’s karma. The soul cannot leave a second earlier than is destined, nor a second later. The timing is exact.

Shri Krishna informs Arjuna that the laws of karma are upheld by his eternal divine power, known as Yogmaya. This means no one can interfere with the timing of death of an individual. It is predetermined according to divine law. Thus neither Arjuna or anyone else has the power to decide who dies and when.

To simplify this discussion: fighting the war is purely an action, and the karmic consequence of the action to the individual who performed it is determined by the individual’s motive for doing the action. According to the motive, so will be the consequence, the karma, awarded.

Thus, Arjuna learns that if his motive is towards Maya, the material existence of birth and death, be it virtuous or not, he will remain bound. Wherever his life force takes him when he dies, be it to the virtuous celestial regions, the non-virtuous lower regions, or whether he is reborn in the middle region in human form, he will still be bound by Maya. He will remain bound by his karma, by birth and death, by suffering. He will not be able to realize the full blissful nature of yoga, the blissful union of the atma with the Paramatma, God.

In hearing this, Arjuna realizes that every action has spiritual consequence, all of which depends on personal motive. “But” asks Arjuna, “what motive leads to God-realization?”

“Surrender to Me Arjuna, consecrate the motive of your actions to Me, love Me, merge your mind into Me and I will take you beyond the bondage of Maya. I will give you the supreme love for which you have been seeking since eternity.”

The Gita is not about war. It is not about violence or non-violence. It is about understanding the nature of motive and consequence, of the atma, and of the Supreme Being, who is essence of Divine Love. It is a very complex writing, yet when understood, its wisdom and guidance can be applied to every thing you do. 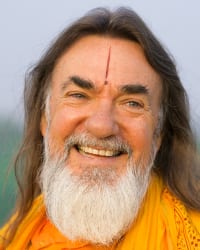 Swami Govindananda (Swamiji) is the founder of Ji Living. A New Zealander, he lived years in India learning philosophy and meditation at the deepest levels from a renowned Master. Through his Seven Steps to Self Understanding online video and meditation series at jiliving.com, he illuminates the wisdom that lies at the heart of yoga. A presenter at Wanderlust festivals and yoga studios, he embodies positive spirituality and gives inspirational insights into the significance of human life. Swamiji is known for his wisdom, his gentle, humorous nature and ability to tell great stories.