When I get in touch with DJ Taz Rashid, also known as Tazdeen Rashid, he is getting a pedicure with his wife. He’s got a busy day ahead of him—in fact, he’s always busy, either creating a new track or on the road playing a festival or show. He frequently plays yoga festivals and ecstatic dance parties around the globe.

One of the most sought-after mindful musicians, Taz has the unique ability to read the energy of his audience, whether it be at a dance hall or in a yoga studio. His understanding of various musical genres gives him the toolbox to play with a multitude of sounds, and his exuberant energy electrocutes the room with sound vibration.

The Plunge Into Passion

Taz was born in Dhaka, Bangladesh into a family of doctors and engineers who were “also amazing artists, musicians, singers and dancers.” When he moved to America at eight years old, he followed his own artistic vision, and taught himself how to play the piano.

“I started obsessing about figuring out songs on the keyboard,” he recalls. “My creativity was ignited by the new world I had to adapt to, and the time I spent alone. I felt pure happiness when the keyboard I was playing sounded like the songs in my head.” But it didn’t stop with the keyboard—his passion for music was boundless, and over time he learned to play the piano, guitar, hand percussion, the didgeridoo, Native American flutes, djembe, doumbek, and riq.

When Taz first moved to the United States, his vision of success was “to achieve the American Dream and be a big business man working in a high rise.” He practiced music as a hobby, but never thought that he’d transform his creative endeavors into a full time gig. But after completing college and “five unfulfilling years of random corporate jobs ranging from real estate to door-to-door sales jobs,” Taz had a sort of spiritual awakening. Fearlessly, he made a drastic shift in his life and let passion lead him to use music as a tool for empowerment.

In 2012, Taz had a vision of hosting mindful dance parties in his hometown of Chicago, and decided to try his hand at DJ’ing. He incorporated hand drums, djembe, and doumbek into his sets, and later switched to an electronic hand drum. With a passion for eclectic influences, Taz’s sound became a fusion of global, house, devotional, funk, remixes of known classics, and remixed modern pop.

“I play with an empty canvas, knowing that anything is possible,” he says. “When I’m DJ’ing live, I have to let go of my musical agenda, as timing is everything.”

Taz also collaborates often with yoga teachers, healers, dance facilitators and meditation teachers, creating a variety of sets and experiences that cater to a mindful audience.

“The most exciting collaborations happen when there is a level of trust between the teacher and the musician” he says. “Collaboration also allows us to learn more about ourselves, our personal needs, and areas of potential growth because in a sense we are opening ourselves to feedback. And of course, it just feels good to connect, and be part of a team rocking an audience—even if it’s just for one class!” 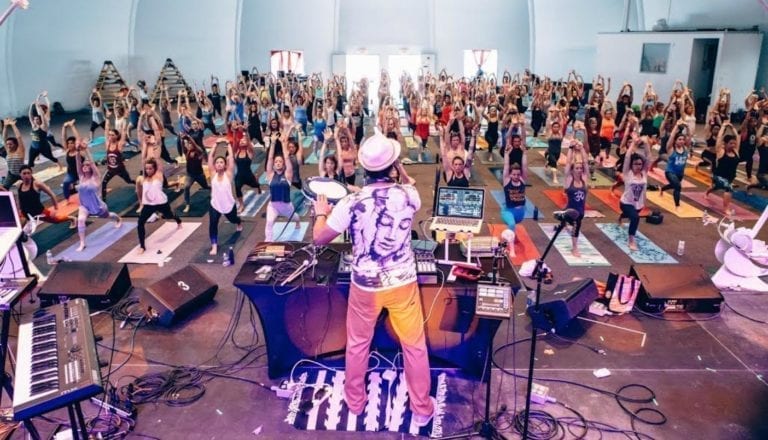 A Yogi State of Mind

The transition to create music for yoga classes was natural for Taz, as he was already practicing regularly. His sounds seem to intuitively follow movement and breath, and he uses his perspective as a yogi when crafting sets. He’s also no stranger to the various forms of practice—at festivals Taz loves to attend the flow and restorative classes, while at home he tends to stick with vinyasa and hot. He’s currently based in Chicago, so getting to a “sweaty yoga class” to release the tension of working in front of a computer during the winter months is vital.

“The wave of energy found in a yoga class goes through in my mind when I’m composing music,” he says. “I envision the class and ask myself how a song could work to support a yogi. Sometimes I’ll get on a mat and practice with a new track I am producing, move with the beats, watch my breath, and check in with my body’s response to the sounds. I use my body as a feedback system.”

Paying close attention to the collective breath of a class allows Taz to improvise and mirror the tempo and intensity of the moment. 96 percent of his classes are improvised and inspired by the energy of his audience.

“The challenge is being fully present in the moment and making decisions about selections on the spot,” Taz reveals. “Some of the biggest magic I’ve seen takes place when surrendering to the unknown.”

On top of that, Taz understands and appreciates the depth of connection that can stem from a communal yoga practice. He takes the lessons from his mat and applies them directly to performance.

“The more connected I am to an audience, and the more attention I pay to the energy pulsing in the room, the better I feel on stage,” he says. “When I can feel that I’m in the flow, we are all one, and it’s amazing. I can feel the audience coming into the now, with a high energy that I can only describe as pure joy. Truthfully, it’s the best natural high I can imagine—a feeling of oneness with the audience, the sound, the moment. Everything.”

Taz offers Wanderlust readers a free download from his brand new album Awakening Truth. For more on DJ Taz Rashid and his music, visit his website.

Want to see DJ Taz Rashid and other Wanderlust musicians this summer? Click here for more information on 108s and summer festivals.