Sri Dharma Mittra is teaching at Wanderlust Stratton this year! Don’t miss this incredible opportunity to learn from a master teacher in person. Tickets are still available here.

My first experience with Sri Dharma Mittra was over a decade ago at his studio in New York City. I had just moved from San Francisco and was looking for a studio near my apartment. As karma would have it, I stumbled into his, and had no idea he was a “famous teacher.” I thought he was a nice, humble, Indian man teaching yoga. (I would later learn he was from Brazil.) One class in and I was hooked—I went back to Dharma’s class at least twice a week for few months. His classes were challenging, humbling, and ended with the best Savasanas ever. Later I would learn the term “Yoga Nidra” and realized Dharma was giving us Yoga Nidra for Savasana.

One time in those early days, I was waiting around for class with other students near the entrance. Dharma walked in, walked by me, backed up and stopped. He stood directly in front of me, looked into my eyes and said, “You have prana in your eyes.” I didn’t know what prana was, but I knew this teacher could see the nonphysical. And I thought to myself, “who is this man that can see energy or the non physical?” At that moment I knew he was a special teacher and I wanted to learn more.

Dharma is a teacher’s Teacher, and a Teacher to all. He walks the walk and talks the talk of a Yogi-Teacher, and there is no hypocrisy on his part. Plus, he’s funny, jokes around, and makes class fun and playful. He uses lila, creative Divine play, and reminds us not to take life or our practice too seriously. Through his teachings he points to the fact the world we know is the result of God’s creative play, or lila. He inspires us to be better, more playful, kinder human beings.

This inspiration doesn’t come easy. I’d say that Dharma is a Jivanmukta, or a liberated being—though he wouldn’t likely claim the title. One time I was in class with him, looked at him and thought to myself, “he’s a saint.” He looked right at me and said out loud, “I’m no saint!”

He does, however, walk the walk. As a vegan and a super advocate of animal and human well being, Dharma practices Ahimsa for all holy beings. He teachers that there’s no difference between an animal, insect, or human soul; that we’re all the same, cut from the same cloth. That doesn’t mean, however, that he’s judgmental of lifestyle choices that don’t live up to his personal standards. If one looks at how the animals we eat live and die—if we saw and knew first hand—we too would be vegan. Dharma doesn’t go into the details of global warming, starving nations, the medications, or standards animals live by, the cortisol or adrenaline we consume at the time of their death, all very important things and reasons why we may choose not to eat meat… he merely says, “don’t eat meat.” Dharma keeps it simple and to the point. He also talks about food that are most beneficial for our bodies in terms of prana and nutrients: Live food like fruits, vegetables and grains.

Dharma talks about God. Yoga unites the individual soul with the Cosmic Soul, God communion. God is such a delicate subject today—some people cringe at the name. The name is tossed around so much it loses its power and meaning… However Dharma talks about God Consciousness, God communion, and meditation, and inspires me to do the same.  It is the objective of yoga according to Patanjali’s Yoga Sutras: to experience Samadhi, God Communion and become a liberated being while embodied in this form. I now tell my students that the experience of God communion is not just for Jesus, Mohammed, and Buddha; it’s for you and me too. Anyone can have it and that’s where our true happiness lies.

The biggest lessons I’ve learned from Dharma, however, have to do with the practice—primarily pranayama. I now have a regular practice that incorporates Kundalini-style exercises: simple ones, like alternate nostril breathing, but more complicated kriyas as well. His guidance has taught me the power of pranayama before meditation, for example.

His mentorship has also put me deeper on the path of being able to heal others. He’s taught me that I can connect or heal another person if I focus my thoughts and attention on that being.

SKEPTIC ALERT: The story that follows may seem impossible, but I experienced it. And it’s a prime example of just how special Dharma is.

Several years ago, I  hurt my back in Dharma’s class doing a forearm balance, falling over into Kapotasana back bend. I don’t know how to fall correctly, didn’t engage my muscles properly, and my SI joint locked up. I crawled out of his class and could not practice or teach yoga for three weeks.

I returned to his class just a few months ago, and was practicing an inversion near the wall. Before I began the inversion I mentally told Dharma I cannot get hurt like I did before. I went to the wall, but I didn’t pay attention or measure correctly, and while upside down I started to fall over. I remember thinking to myself, Where is the wall, where is the wall? I was tipping over, then all of a sudden I felt very powerful force. Every muscle and fiber of my being holding me up. I knew Dharma was holding me up with the power of his mind, but my muscles were engaged too. It was a mental assist, much like a physical, but he was across a large room.

When I gently came down I saw him swiftly walking to another part of the room, probably to get better view of me. (Maybe  you have to have someone in your line of sight to do what he did?) Regardless, when I returned to my seat, I mentally thanked him and he nodded in reply.

Dharma is gentle, sweet and powerful all at once. He is a great role model for teachers and students alike, and there is not another like him in NYC, maybe in the USA. He’ll help you strengthen and connect to your body, mind and spirit without conditions or strings attached. And you will do it laughing along the way. Yoga really doesn’t get much better than that. 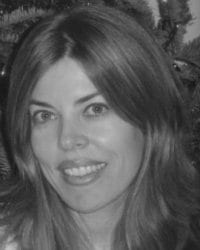 Carolyn McPherson is a E-RYT 500-hour certified teacher also certified in the Barnes Method for Prenatal Yoga, Yoga for Labor & Delivery and Postpartum Yoga. In 2009 she was certified for mat pilates by Teri Steele at Dance New Amsterdam, and in 2011 Carolyn completed a 500 hour teacher training with Sri Dharma Mittra. She is well versed in Ashtanga, Iyengar, Vinyasa & Dharma Yoga and aspires to translate the beauty of Vinyasa, subtlety of Iyengar, and the rajastic nature of Dharma Yoga. Her classes are challenging, restorative, and therapeutic. She’s currently the owner of Pranavah Yoga Studio in Queens, New York.