Do you have an advanced practice that you’re ready to deepen even further? Find your tribe at a Wanderlust Festival. Find out more | 2016 lineup | Buy tickets

In the yoga world, everybody loves talking about Dharma. In Sanskrit, the word translates to the idea of having a sense of worth, the idea of “Life’s True Purpose.” Dharma, however, isn’t always so black and white.

I didn’t start teaching yoga until I was nearly 40. I didn’t come out of the womb playing the piano like Mozart, nor did I possess any other talent that could be clearly named and nurtured. As such, and like many people in my generation, I’ve had many careers: I was a CPA, a stand-up comic, a massage therapist, and a soap opera actor. There was that seedy gay bar that I managed in downtown Manhattan in the early 90’s. My search for Dharma was a painful study in trial and error. I was often called a wanderer, but I felt more like a seeker. Not all wanderers are lost. I was.

Amidst all the uncertainty, there was one thing of which I was certain: My spirituality ran deep to the bones. Granted it was shapeless, inarticulate, and homeless, but it was there nonetheless, propelling me forward to find Truth.

On that fateful day, when I took my first yoga class, my spirit found an expression and a home. Yoga became the fertile landing pad onto which the seeds of my soul could take root, find potency, and thrive. Soon thereafter I took my first teacher training.

Teacher training gave me a voice. It gave me a vocabulary and a platform through which I could express my Truth. Prior to that, my message to the world was vague and abstract. Now it had context and focus, and it placed me squarely into my Dharma. It was time to pay it forward. When I really boil it down, here’s why I teach:

To live a life of meaning and purpose, you must first identify your unique ‘gift’ or talent. Then—stop waiting for the “right” time!—you must share it with world. Both are required.

The bottom line is this: If you know your gift and you share it with the world—no matter how long it took you to get there—you will live a life well-lived. This, in turn, leads to happiness. This is why the stakes are high. And this is why I teach. 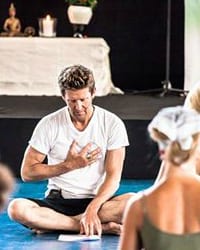 Marc Holzman spent most of his life in Los Angeles and New York, though he currently calls Paris home. Certified in Anusara in 2006, his teaching has now evolved to include a number of styles that have influenced him on his yogic path: the movement of Vinyasa Flow, the precision of Iyengar, the dance of Kundalini, his deep love for mantra and meditation, and his passion for Ayurveda. In 2007 Marc created Guerilla Yogi, a donation-based class that insures that students of all economic circumstances can experience the joy of yoga. When he is not in Paris, he teaches worldwide either live or via the many classes that are streamed through the Internet on YogaGlo.