Skip to Main Content
Photo by Chris Eckert
Want to learn what a silent disco is all about firsthand? Don't miss the party of the winter in Wanderlust O'ahu. You've never danced like this. Trust us.   Imagine yourself walking home from work, earbuds plugged into the latest Sylvan Esso album. Sun's out. It's Friday night, and you have plans to meet up with a funky, fun friend who is always up for getting down. Moments like these can feel like you're on top of the world. All the pieces fit. The path is lit up with a melody so perfectly aligned with your natural pace, and it is as if the lyrics were written for you. Only you. After what feels like floating to the night’s destination, your friend leads to the surprise post-dinner secret invite only event. In an empty lot between two of your favorite boutiques in the city, there is… a silent disco. Yeah, what's a silent disco? You ask. Grab a pair of headphones, she responds. Peering in, the scene is like any other dance party: uninhibited moves, sometimes drinks, glistening brows, some mad auditory scientist spinning obscure technology you might not know the name of. It’s a disco alright, but where is the sound?

“And those who were seen dancing were thought to be insane by those who could not hear the music.” – Friedrich Nietzsche

You immediately lose your friend to the watering hole of whatever is going on. After fixing wireless headphones upon your welcome, now you hear it! The faded beat to the beat of another drum in between two songs as if the DJ is reading vibes entering the space. Yes, you are the vibes!

While Disco music achieved popularity in the mid 70s,  silent discos are relatively new. Well, when considering the evolution of technology and its marriage to the music listening experience, relatively new-ish. The concept emerged in the early 1990s. Events in cities gained momentum as an eco-activist effort to minimize noise pollution, and continued in popularity out of curiosity and… plain ol’ fun. First appearing for a while as a rave or dance party, other industries have adopted the format for its personal, experimental, and meditative reasons. Now silent discos take shape alongside other stages at modern music festivals, as well as in smaller, intimate spaces like silent yoga classes, equipped with wireless headphones, a group of people who are up for trying something new, an instructor, and a DJ tuning into the vibes of the room. If you're interested to dancing to the beat of your own drum (or bass, we should say), then you're in luck. This year Wanderlust is excited to present DJ Jesse Blake at a majority of the summer festivals. He'll be running the silent disco—an area that he's all-to familiar with. Jesse Blake has DJ'ed all over the Western Hemisphere, from NYC to Mexico to Lollapalooza. While originally hailing from Chicago, Jesse ventured out to explore his music, sharing the DJ booth with Cut Copy, Jamie xx, Aeroplane, Glass Animals, and Wild Belle. He hosts DJs weekly classes at Wanderlust Hollywood and Equinox, all while holding down club dates all over Los Angeles.

"Whether it's a noise pollution issue in a natural environment or a night time noise ordinance, we can avoid both situations and have a much smaller sonic footprint. It allows us to dream up events in super unconventional places—a late night hotel pool party, or a forest preserve, or a remote beach.” – Jesse Blake

The Gift of Personal Space

Awareness of noise pollution within a community is not the only benefit. Sometimes big events like a festival, conference, or even the pressures of going to a new studio can feel overwhelming, to the point where the experience is muted and clouded by its vastness. Fear not! It is much more personal than the world at large. The technology allows for customization and you can set the volume to your liking. Take a silent yoga class at the beach for example. The waves are roaring, nearby children are splashing, and the seabirds chime louder than the instructor at times. Did they say Bhujangasana, or …Shavasana? In a classroom, some people want to rock out and others want a background effect, where yogis can tune in or out based on their own needs. The same principles hold true for dance or party events: the listener can either turn way up, or have the music be quieter so they can still interact with friends. Coupled with the customization of volume, silent discos and silent yoga classes or events provide an incredible measurement of immersion. The listener, the dancer, the yogi can close their eyes, and tune out from everything. Truly be with one’s self. How often do you look within? Jesse Blake proves that his DJ skills extend beyond crafting killer jams—the music and the moment of a silent disco promote mindfulness. And while we love doing this in a yoga class, our hands firmly on the mat while we kick a leg up, it's also nice to forget the asana, and just move.

"I think with care and intention anything can be meditative. At silent yoga events I get the feedback over and over again that the headphones actually really help facilitate a super immersive experience, where the outside world really drops away for folks while they're practicing. And my goal is for sure to bring people to a deeper place in those moments." – Jesse Blake

The Wanderlust silent discos also have the added element of surprise—they won't be on the schedule, but rather popping up on site. Even if you're not ready, the moment is yours. Check out Jesse Blake and all his silent disco and yoga opportunities via his website, located here. Whether it's at a Wanderlust Festival, take back your musical freedom and dance anywhere your singing heart desires. For more information, click here.  — Karen 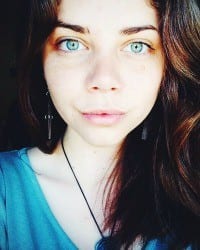 Cygnarowicz is a writer and artist living in Portland, Oregon, where she serves as a production assistant at Modern Macramé. She received her MFA in Writing from Vermont College of Fine Arts. Follow her Instagram, and her personal project The Ok Club as she explores what it means to be wildly human.