They say the “veil is thin” at this time of year, as Scorpio season begins to spook our inner witches, as we ride the festivities of Halloween and All Souls Day (Day of the Dead) into late autumn. As the leaves on the trees make their final show of cloro and give way to decay, we too find ourselves preparing for the hibernation of the long journey inward of winter, lurking around the corner next month. As such, Scorpio season is characterized by a feeling of nostalgia, or emotional heaviness, a sensation of endings and heavy transitions. This cycle begins on October 21 or 22 of every year, and carries us right into the start of the holiday season. This, of course, is apropos as we settle into feelings of nostalgia and coziness, sinking into desire for ritual and the creature comforts of our home.

Water sign Scorpio is associated with the sacral chakra, ruling our reproductive system, bowels, and sex organs. It is symbolized, of course, by the Scorpio, the totem significance of which is the cycle of birth, death, and rebirth. We are born of our Scorpio-ruled organs, and from them we give life. We watch the world lose its luster during this season, and trust it will be reborn come spring. Ruled by Pluto, Scorpionic energy is powerful, transformative, and even karmic. Pluto, as the god of the underworld, begets this transformation of energy, and ushers us through the never-ending cycles of life.

How Scorpio Themes Show up on the Mat

Not only reflected in the outer landscape of the natural world, but themes of birth, death, and rebirth also show up in our relationships and our experience with self during Scorpio season. It is important to note, here, that death does not only mean the end of life, or some sort of profound loss. Death can also mean here the stripping away of what no longer serves, the cleansing through Scorpio’s waters of what it may be time for us to release.

Intensity is a dominant theme we may experience during this cycle, as we face the final transition of the autumn season. It is in the smallest of details where we can plug into the intensity of an experience. The tiniest drops of hail herald the strength of an autumn storm; the deep red and orange hues of metamorphosing leaves generate the fiery blaze of a fall landscape. Tuning into the simplicity of body-breath connection allows us to tap into the fervency of practice. As we cultivate sensation through movement and observation we are able to savor the clarity of the here and now.

This intensity, then, gives way to the unraveling of ego and self that allow for a Scorpionic rebirth. In Sankhya philosophy—one of the six Hindu schools of thought—the world is perceived as existing of two opposing realities: prakriti (tangible matter) and purusha (consciousness). In practice, we learn to release ourselves from the bondage of prakriti and move into the stream of purusha. We begin to untangle the trappings of ego and expectation, known in Vedic context as ahamkara. In the Bhagavad Gita, Krishna directs Arjuna to release himself from the state of prakriti, as the true self (existing in the state of purusha) can never be present when shackled by ahamkara.

The unraveling of ego and the resulting connection to purusha is some of the heart’s greatest and most challenging work. Autumn, of course, is an apt time to explore this idea of transition; yet it’s not seasonally exclusive. Life is cyclical. We will wind up and bind to the ego, and then unravel, release, and grow again and again.

Since Ancient Egyptian times, the mythical Sphinx has served as a symbol of mystery, fascination and intrigue. This heart-opening posture embodies the lower, grounded phase of Scorpionic energy, and invites laser-focus, or drishti, from a place of calm. Sphinx Pose stretches the abdominal muscles while strengthening the glutes. By rooting into the forearms, the thoracic spine is mobilized.Pressing into the tops of your feet and the pubic bone can mitigate strain in the lumbar, and engaging the glutes helps protect that region.

As the top of your head extends upward to open your crown (Sahasrara) chakra, you can think of this as an energetic exchange between the underworld below and the heavens above. The throat (Vishuddha) chakra is also opened as your cervical spine extends. As your internal gaze is brought to the third eye (Ajna) chakra, your intuition and powers of visualization become heightened. 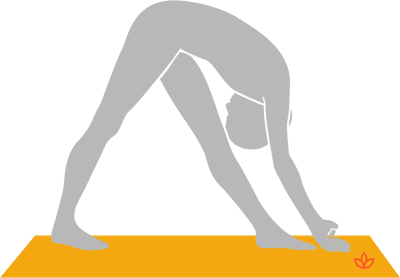 Pyramid Pose is an inversion that offers an intense stretch along the hips, hamstrings, and shoulders. A slight external rotation of the thighs allows for stabilization of the SI hip joints so that the pelvis can remain more or less neutral. Engagement of the core supports the lumbar curve. Allowing the knees to soften can help the spine to neutralize, rather than round forward excessively. Pyramid Pose can improve balance and core strength, as well as strengthen the legs.

You may place your hands on blocks to elevate the shape for more accessibility, or keep your back heel lifted. You can also flip your palms and point your fingertips backward to stretch your wrists and triceps. If there is enough stability in your pelvis and core, bring your hands behind your back to a reverse prayer to open your chest.

This stretch encourages the flow of apana, downward or outward-moving breath. Hinging forward at the pelvis stimulates the flow of energy from the solar plexus (Manipura) and sacral (Svadhisthana) chakras—particularly through the back body. Plugging the feet into the earth bolsters the groundedness of the root (Muladhara) chakra. 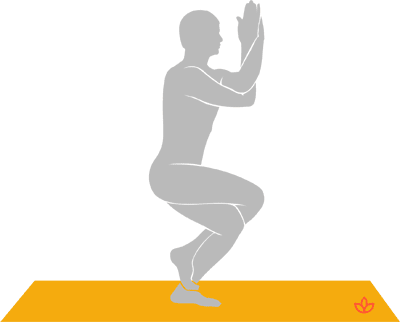 Eagle Pose is named for Garuda, the mythical king of the birds, portrayed as having an eagle’s beak, an impressive bright red wingspan, and the golden body of a man. According to the Mahabharata, Garuda’s mother, Vinata, mother of the birds, was tricked into becoming a slave to her sister-wife, mother of the serpents. The serpents agreed to release her from servitude if Garuda could bring them the elixir of immortality—which he did, giving snakes the ability to shed their skin and be born anew.

Eagle Pose can be modified depending on range of motion. You can bind your arms and lift elbows toward the shoulders, or press the backs of your hands together. Wrapping the legs generates sensation in the IT band, which connects the hip to the knee, but does not lengthen the same way that  muscles do. You can invite more stability into the shape by pressing the top of the wrapped foot into the back of the opposite calf muscle and drawing the torso slightly back in space.

Eagle Pose is a standing pose that activates the root (Muladhara) chakra. The option to bend forward and draw the wrapped elbows in toward the belly engages the core to stimulate digestion and awaken the solar plexus (Manipura) chakra. As with any balancing pose, Eagle is sustained with a drishti, a point of soft, concentrated focus. This stimulates the third eye (Ajna) chakra. The upward flow of energy from the traditional, familial center to one’s personal power center and toward the center of intuition is an empowering sensation.

Lord of the Dance Pose or Dancer’s Pose (Natarajasana) 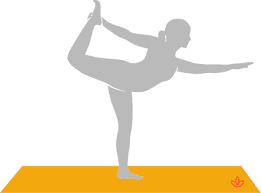 Natarajasana is named for the depiction of Shiva Nataraja, King of the Dance. This is the incantation of Shiva whose furious, destructive dance propels forth the cycle of life—immortalizing Shiva as creator, preserver, and destroyer. Shiva Nataraja is shown stepping on Apasmara, a soul bound by ignorance and earthly pursuit.

Dancer’s Pose is a heart- and chest-opener, mobilizing the shoulder girdle and stretching the upper body, as well as the thighs and groins. A stable footing is essential for maintainin

g balance. To avoid compression in your lower back, keep the chest lifted while hinging forward.

As your thoracic spine is mobilized to lift your chest, the heart (Anahata) chakra is opened. The sacral (Svadhisthana) and the solar plexus (Manipura) chakras also become activated. When moving through the cycle from birth to rebirth, we must examine both our deepest desires, rooted in our sacral center, and what ignites our fire, burning in our solar plexus, in order to move from a place of our heart’s true integrity.