“Why do you hold yourself back?” my teacher Jill asks one day when I’m in Triangle pose.

“What do you mean?” I say. In the six months I’ve been practicing, I feel I’ve grown so much. I’m not holding back at all.

She steps her feet apart, takes a breath, extends her arms, shifts her hips. She leans out over her front leg, places one hand down on the ground, then draws the other up into the air.

Her alignment is spot-on. Spine straight, fingers spread, with her gaze—dristhi—up toward the ceiling.

“Is energy moving? Do I look alive?”

“Right,” she says, deepening her breath. “Look down.”

She’s pressing the outer edges of her feet into the earth.

Her fingertips radiate like the rays of a sun. She draws her arm behind to open her heart. The entire pose lights up.

“Do you see the difference? The first was doing the pose. The second is being it.”

“You try. Engage your muscles, but relax,” she coaches.

I take the pose, but don’t know how to find those actions in myself. And I’m confused. I love the fact that my yoga practice is the one place I don’t have to try so hard.

“I thought yoga was about surrender. Not pushing harder.”

“I’m not talking about pushing. I want you to awaken your potential.”

I wonder how to do this. I get the answer when we practice handstand against the wall. I try to kick up, but fall down each time.

Others kick up effortlessly. Some balance in the middle of the room.

“Why aren’t you helping me?” I ask Jill, frustrated.

“I’m letting you work it out. Just keep at it.”

I kick up a few more times, only to land on the ground with an ungraceful thud.

“One day, you’ll lift yourself up,” she says. “You keep thinking yoga is the pose, but it’s the process.”

I know that yoga is a balance of will and surrender, but knowing it and embodying it are two different things. I’m grateful when we come down to rest.

My Body, My Biography

“Our biography becomes our biology,” Jill explains as we rest in child’s pose. “Events we haven’t reconciled are carried on a cellular level. The body remembers. What stories do you tell about yourself?”

My story is that I’m “stuck.” I’ve been trying to have a child for years. I want to let go, but I keep hearing his voice calling me, so I keep trying to find him.

What are the stories I tell about myself? The fact that I can actually see my life as a story feels significant. But I’m tired of my story. During Sun Salutations, a poem arises:

Years later, I leave California and move to Japan, where I open a yoga studio. I try to guide students the way Jill guided me. I say: Process is everything. My handstand is proof.

But I’m still struggling with starting a family. So when Dietmar the psychic comes to Tokyo, I go to see him. Seven years ago, he’d first asked about my son. We talk about the yoga studio, my decade-long marriage. Then he gets serious.

He looks me over. “You’re clean and clear. Your child should be here.”

Should? Wasn’t that presuming a lot?

“You’ve done so much work. It’s not like you not to pursue something. Why haven’t you gone after this?”

“I have,” I say. “I thought instead of striving, I could surrender and trust.”

“How’s that been working for you?”

“Like shit,” I acknowledge as the tears come down.

“Right,” he laughs. “I’ve seen this child around you for years. I see that you have gone deep, released the pain. You have to get rid of this almost biblical condemnation of yourself as a barren woman, cast out into the desert.”

I bristle at this comment. “I don’t consider myself a barren woman,” I say.

“Good. Then prove it,” he challenges me. “Think of so many women who give birth, but have no real heart connection to their children. It’s not always about giving birth from the body.”

I nod, urging him on.

“I can’t stand to get my hopes up again.”

“Release your conditioning,” he says, handing me a tissue. “Your child is coming.”

“He will come. And he will be a beautiful child,” he repeats.

“So what!” he says, waving his hand. “You’re a warrior. Of course that’s the path you’re going to walk on. Stop being a victim!”

I bristle again, but only because he’s struck another chord.

“See the magic around you. Wake up. Take the reins!”

“Okay, okay,” I say, encouraged. His enthusiasm is contagious. And maybe, just maybe, he really does see something.

“Good. Now go out and find that child.”

If my yoga has taught me anything, it is to find the balance of will and surrender. At 44, the time has come to put it into practice. We apply to adopt in Japan. The odds are slim, but we make a promise to keep our heads above water and our hearts above despair. And I listen for the voice of the child I’ve heard for years. It hasn’t called me in a while.

I go to my mat, take my arms over head, gather in the light of the sun, bringing in prana and hope. I find power in Warrior pose, stillness in Half-Moon. I open my heart in backbends, then twist. I invert to turn the world upside down. I lie down in Corpse pose. How deeply can I let go? I feel the contours of my body start to dissolve. There is no body, only a shimmering field of energy. I ride its waves.

When I sit down to meditate I know what to do.

This time, instead of waiting for my child’s voice to come to me, I speak directly to my child. 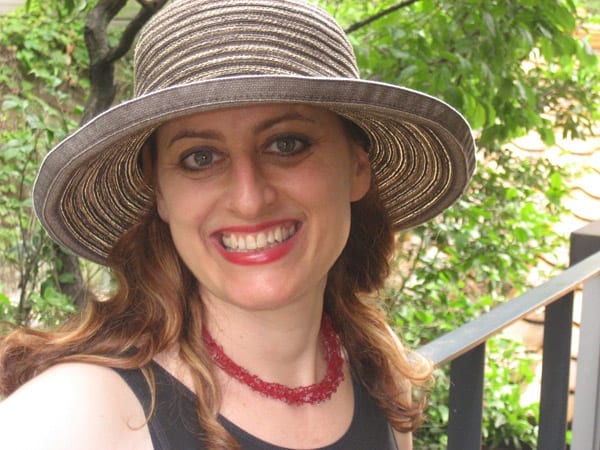 Leza Lowitz is a yoga studio owner and multi-genre author of 18 books. Her memoir about her journey to motherhood over two oceans, two decades, and two thousand yoga poses, Here Comes the Sun: A Journey to Adoption in 8 Chakras, has just been released from Stone Bridge Press and was an Amazon #1 best-seller in its category on its release date.