This article is part of a series that explores the idea of mindful meat consumption. Have a question about nose-to-tail eating? Fill out the form below, or click here to submit. We’ll build an article answering your best questions in fall, 2016. Stay tuned!

When I was kid, my favorite type of meat came in the form of dinosaur-shaped chicken nuggets. I was appalled at the meals my grandfather would order: Liver and onions? Tongue?! Nope. Not for me. Little did I know, those seemingly bizarre foods were far healthier than my ultra-processed, Maltodextrin-layered nuggets. Turns out Grandpa was on top of his meat-eating game.

It’s pretty simple: Tossing out valuable parts of the animal doesn’t make sense environmentally or economically. Using the whole animal is a practice that is still common in many countries around the world. Aside from ultra-foodie trends, however, sometimes called “nose-to-tail eating,” it has largely slipped from the Western mindset. This could be due to the lack of connection we feel from our food sources, or because of attitudes (like the one I had as a child) that prevent us from trying unfamiliar things. The truth of the matter is that it’s not all that unfamiliar to use the whole animal. As a species, humans have been doing it for centuries.

There are many examples of whole animal use in traditional dishes around the world. Haggis, a traditional Scottish dish, is made from sheep organs. Even more well-known is pâté, traditionally a French delicacy. Native Americans stuffed animal intestines with dried berries and boiled it, making a delicacy known as “Blackfoot Pudding.”

But whole animal use is actually steeped in American culture as well, though we may not even realize it: Think a good ole’ fashioned Southern pig roast, or a bag of pork rinds. 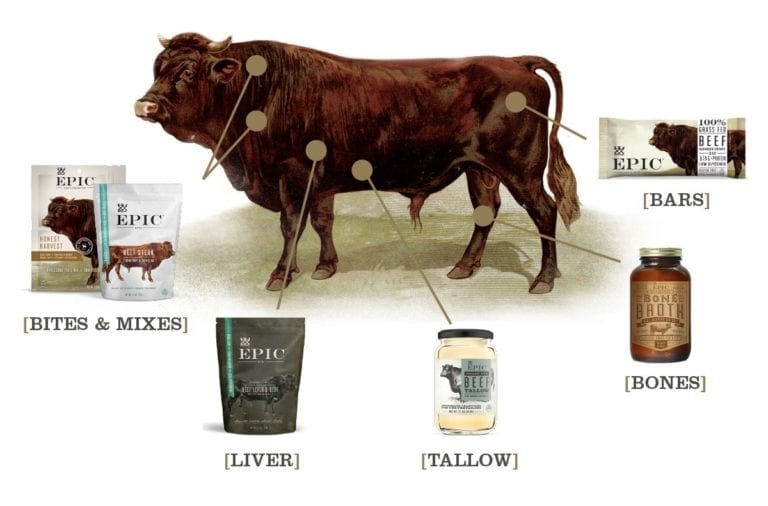 EPIC Provisions is one company that promotes whole animal use, through their Whole Animal Project. “By seeking ways to use more materials from these brilliant creatures, we are better honoring these animals as well as producing some of the most nutrient-rich foods we have ever created,” writes Taylor Collins, founder of EPIC. “Through this initiative we hope to continue moving toward purchasing entire animals and creating economic incentives for ranchers to raise their animals on pasture.”

Offal, a blanket term that refers an animal’s internal organs and entrails excluding muscle and bone, can generally be used to create a variety of densely nutrient-rich snacks. According to Collins, grass-fed liver is one of the world’s great superfoods, and one of the most underutilized; EPIC uses liver in its beef liver bites. Bone marrow is another delicious and highly underutilized delicacy that comes from responsible whole-animal use, though the dish is starting to catch on in high-end restaurants.

Other whole animal products include cooking oils and bone broth. Using animal cooking oils doesn’t just mean adding it to your menu, however—they can also be used as a skin moisturizer, lip balm, hand salve, mustache wax, or even to make homemade soaps and candles. EPIC also uses animal bones to make its bone broth. Bone broth is rich in protein as well as skeletal-strengthening gelatin, and is typically used as a base for stews and soups, and as flavoring for other dishes.

To maximize the nourishment you can receive from a living creature is to honor that it was, in fact, living. By not using the whole animal, we’re not respecting other living creatures, our bodies, or the Earth. Giving thanks to the animal for supplying your meal is a good start, but it’s really when we choose to honor the whole animal that we take a step forward in mindful consumerism and changing our food supply system.

In so doing, we encourage a mindset that fights excess waste and increases appreciation for the animals that nourish us. And that’s something we can all put on the menu.

EPIC foods set industry standards by sourcing our meats from ranchers that we deem EPIC. We mandate proof of certifications, which validate that our animals receive the utmost humane treatment. Not only do humanely-treated grass-fed animals live better, more natural lives but they place less stress on the land they inhabit. By combining delicious tasting and lightly smoked animal protein with savory nuts and dehydrated fruits, EPIC foods are unique in the sense that they are more savory, tender, and flavor-forward than jerky. They also do not include the high carbohydrate and sugar contents that can be found in other bars. Reconnect with your ancestral diets and enjoy every bite of it!