Skip to Main Content
Dr. Chelsea Jackson Roberts teaching at Wellspring, 2018
Dr. Chelsea Jackson Roberts is just one of the exceptional teachers you can learn from at Wanderlust Squaw Valley! Tickets on sale now.  What does it mean to “show up?” This is generally understood as the act of bringing your best self to all your activities, of living in the integrity of your intentions as well as your actions, and holding fast to social commitments and responsibility. Yogic philosophy describes three different types of showing up: There’s the commitment to practice, or sadhana; there’s showing up for oneself by developing personal truth (Satya) through self-study (Svadhyaya); and then there’s the directive to show up for community, to create sangha, a community that supports and encourages one’s spiritual journey. When considered in modern life, the idea of “showing up” can be even deeper, and take on even greater import. For Dr. Chelsea Jackson Roberts, social justice activist and founder of Atlanta-based Red Clay Yoga and Yoga, Literature, & Art Camp, showing up means practically applying yogic principles in an unjust and often-inaccessible society. “I do a lot of work speaking my truth advocating for youth—black and brown youth in particular—to speak up what their realities and truth within their communities. Showing up means to actually put the components of yoga to practice out into the world,” she says. Chelsea believes that yoga helps to foster a sense of groundedness, and an awakening to see the world with deeper clarity and empathy. “So if we’re using the breath, and if we are open to being honest about what we're experiencing in this life,” she says, “then showing up means allowing those things to all come together in order for us to move into action.”

Showing up means to actually put the components of yoga to practice out into the world.

That is to say, once you’ve explored your Satya and created your sangha—once your well is full and you’re able to serve others—true yoga not only asks but requires that we take our practice off the mat. For Chelsea, to show up in the integrity of practice requires us acknowledge the eternal oneness of all beings. We are all connected. How can one being be happy and free if another is not?

What Accessibility in Yoga Means

There are certainly rumblings in the mindful community about the lack of accessibility in yoga. This is visible in the lack of studios and opportunities in certain communities, and also in who (and who are not) celebrated as teachers, speakers, and leaders. Changing this is where the real work of yoga begins. Marginalized communities, says Chelsea, need mindfulness and wellness opportunities, as these practices are ideal primers for advocacy. “People don’t really initially understand the connection between yoga and social change,” says Chelsea. “More than anything I feel like it gets us in a position for us to be open and ready to have physical conversations. Because yoga is an embodied practice—and because these conversations can create tension in our body—it is a great tool for us to move through to breath, to remember to breathe, to resource ourselves,” she says. Chelsea is well-acquainted with the need to resource herself. As a black American woman, she has firsthand experience with marginalization and accessibility. She uses that lens to understand the other ways that people experience oppression—whether it's gender, identity, or religion—or the systems that do that. “For people who have had opportunities to really speak, and to have had leadership positions, it's now time for those folks to start to step back so that other people can step up,” she says. But the most important first step is to listen first. “Depending on historically what your experience has been with being silenced,” says Chelsea, “now it's time for there to be a shift.” Yoga can play an expressive role in facilitating that shift. Chelsea is a faculty member of Off the Mat, Into the World, an advocacy organization founded by Seane Corn, Hala Khouri, and Suzanne Sterling in 2007. Off the Mat is just one of the many organizations working toward this change. “There are a lot of different spaces that are intersectional, that are bringing and bridging the ways in which we experience this world in inequities so that we can understand each other to go deeper into our own healing, and then also to start to transform things together, and to work together,” says Chelsea. And that’s what showing up is all about. [caption id="attachment_106049" align="aligncenter" width="640"] 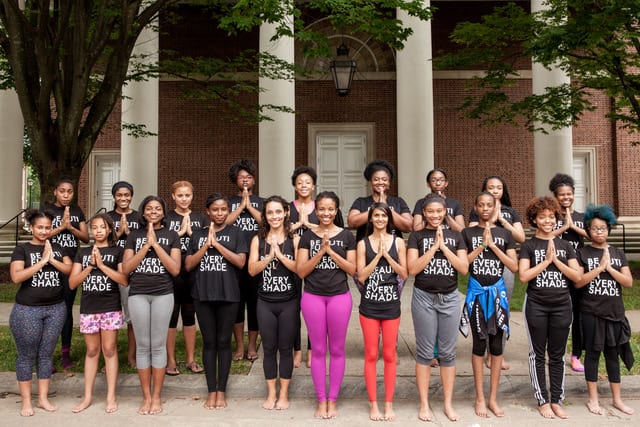 The Journey to Showing Up

Chelsea started her career teaching in Title I schools in the Atlanta area after returning with a Masters Degree from Columbia University in International Educational Development. She’d been a certified yoga teacher since 2007, but it was her work in the classroom that Chelsea started to notice the intersection of yoga, literacy, and mindfulness programs. She started Yoga, Literature, & Art (YLA) Camp as part of her PhD dissertation at Emory University. At the time, says Chelsea, she just considered yoga a hobby—she was on the track to be a tenured professor. But life had other plans.

For people who have had opportunities to really speak, and to have had leadership positions, it's now time for those folks to start to step back so that other people can step up.

“The next year after my dissertation, families [of YLA campers] started calling, writing, and asking when the next camp was going to be,” says Chelsea. “My husband and I regrouped… We used our wedding gifts to be the donations to our seed money for Red Clay Yoga.” Started in 2014, Red Clay Yoga has now expanded to provide access to yoga for youth not just in the Atlanta area, but to provide training for teachers and allies, “people who are committed to justice and want to utilize yoga as the tool to get them there, and also heal throughout the process.” Now a full-time non-profit, Red Clay Yoga provides programs to youth, training for yoga teachers, educators, and community activists. Chelsea’s vision is more than just a great idea—it’s working. Many of the girls who entered the original YLA, when they were 13 years old, have now matriculated from high school. “We’re having our first weekend leadership retreat with some of the girls who will be moving into a yoga teacher training,” says Chelsea. One of the young women, now a college freshman, wants to teach yoga while she’s in school. “These were the programs that we saw were essential with our communities,” she says. Chelsea’s husband and Red Clay Yoga co-founder, Shane Roberts, is currently working to develop a similar program for young boys.

Why This All Matters

When it really all comes down to it, the practice of yoga is to tune in, which in turn, allows us to be our best selves outwardly with the world. There’s a persistent thought in the community that coming to the mat allows you to develop your best self—which is enough. This, however, can be seen as a form of what’s known as “spiritual bypassing.” Simply having a physical yoga practice doesn’t necessarily mean that you’ve done the hard work to share those teachings with the world. Chelsea believes that we can use our yoga practice “as a tool to go deeper and understand ourselves, and the ways in which we are contributing to systems of oppression, or benefiting from systems of oppression, or how we want to transform it.” Chelsea believes that any time we have the access—the privilege—to practice, to go and sit and be with ourselves, we have a responsibility to work toward expanding that access. “If we are true to this practice of yoga in that it is about liberation, peace, oneness, and nonviolence,” says Chelsea, “then it's impossible for us to do that in this isolated experience, thinking that if ‘we're good’ then that's all that matters.” Working toward fixing this can happen many ways. Chelsea cites rampant gentrification in Atlanta—and in a lot of communities across the US—as a reason that the mindful community has a particular responsibility to consider accessibility. “A lot of communities who have been there are being pushed out, and so, it does feel great to go and work on myself at a beautiful yoga studio but, what is the cost?” asks Chelsea. “What is the expense, and how does it impact someone else within the community, or outside of the community?”

The way that people can start to show up... is to start to be honest about who is present, and who is not present in your yoga studios.

Chelsea says there are lots of ways that people can begin to accept this responsibility. Just like doing a headstand for the first time can feel like a serious risk, the work isn’t easy. “I feel like the way that people can start to show up,” says Chelsea, “especially white folks who are practicing yoga as it's practiced here in the United States, can start to be honest about who is present, and who is not present in your yoga studios.” Think about who’s being elevated as a master teacher; consider walking away from studios that don’t consider inclusivity and diversity. Once you’ve started to notice the systems of oppression that show up in your sacred spaces, it’s easier to begin to change. “It’s way overdue for us to start doing yoga work by calling on the same tools, practices, and philosophies that drew us to the practice in the first place. For me, it was liberation,” says Chelsea. Because maybe that’s ultimately what yoga is all about. No being is free—there is no true liberation—until we are all free. We all have a responsibility to continue showing up until we all have the opportunity to do so. —