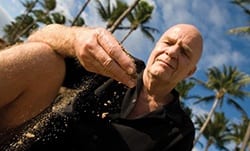 “For me, manifesting is not about attracting what you want. Manifesting is an awareness and an understanding that you attract what you are.” It’s no overstatement to say that Wayne Dyer’s Speakeasy from Wanderlust California 2012 was the talk of the festival.  Ripples from his lecture permeated conversation the rest  of the weekend, as his talk entitled, “Wishes Fulfilled: Mastering The Art of Manifesting”, truly gave attendees tools to reprogram their thinking patterns: he taught us the power in the words “I am”, and the importance of using these words in conjunction with positive self affirmations. What do you want to be? Be it, because you already are.

As he shared with us in this keynote Speakeasy lecture, “You must be able to get to this place in your life where you don’t use the evidence of your senses. What your eyes tell you, what your ears tell you, what your stomach tells you. You want to be able to be in a place where you are living from the end as if what you would like to manifest is already there. To make a future dream a present fact, you must assume the feeling of that wish as already being filled.”

Watch and share this Speakeasy video, wherein we can begin to tap into the amazing manifesting powers that we possess within ourselves and create a life in which all that we imagine for ourselves becomes a present fact.

Dr. Wayne Dyer is an internationally renowned author and speaker in the field of self-development. He’s the author of over 30 books, has createdmany audio programs and videos, and has appeared on thousands of television and radio shows. Many of his books have been New York Times bestsellers including “10 Secrets for Success and Inner Peace”, “Excuses Begone”,  and “Wishes Fulfilled”. Dyer holds a Doctorate in Educational Counseling from Wayne State University and was an associate professor at St. John’s University in New York. Today he is affectionately called the “father of motivation” by his fans. To learn more about Wayne, you can visit his website www.drwaynedyer.com, and check out his collection of books here. You can also keep up with Dr Dyer on Facebook here, and twitter @DrWayneWDyer.

Wanderlust Festival is indebted to Hay House who helped us realize the entire 2012 Speakeasy Lecture Series across all four festivals (Stratton, VT in June 2012; Copper Mountain, CO in July; Squaw Valley, CA in late July; and Whistler, BC, Canada in August). With Hay House’s amazing roster of speakers (which you can witness in person at their incredible “I Can Do It” events), it’s no wonder that they helped elevate the conversation at Wanderlust’s Speakeasy this past summer. We encourage you to stay tuned to the Hay House FB feed to make sure you know the next time one of their authors is speaking near you.