As a yogi and designer, I’ve always wondered if style can be sacred—if yoga values like authenticity and mindfulness can converge with fashion. Is there space for spirituality among the Instagram selfies and the latest leggings?

In 2013 I discovered Sivana Spirit, a yoga lifestyle company that sells apparel, gifts, and accessories, and it struck me how they seemed to be doing something different—something beyond just e-commerce. The product descriptions on the website include information about the deeper meaning behind each item, and everything Sivana offers comes from a greater awareness of the significance these objects have in their customers’ lives.

I spoke with Sivana Spirit owner Benn Mendelsohn to see how his company brings to life its core values.

Sivana Spirit is a second-generation family business with deep yogic roots. Benn’s parents, Marc and Janet Mendelsohn, started the business in 1998. The couple raised Benn and his siblings on the values of yoga, regularly taking them to the Self Realization Center, founded by Paramahansa Yogananda.

Marc began creating T-shirts with a gold embroidered ॐ Om symbol to wear as a reflection of his love and devotion to yoga. He would often wear his creations to the center. When more and more people started asking him if he could also make them a shirt, Sivana Spirit was born. Even the name they chose for the company speaks to the Mendelsohns’ commitment to yogic principles: Sivana means “oasis of enlightenment.”

Then, in 2006, the family went on a pilgrimage to Northern India. They stayed in ashrams, and it was through this experience that Benn and his brother Sam’s understanding and love of yoga grew.

In 2013, when their parents decided to retire, Benn and Sam took over ownership of Sivana Spirit and turned it into what it is today—a thriving online store that consciously reflects its yogic origins through its products.

Inherent in yoga is the idea of oneness or union. Sivana employees strive to embody this value through their work, making sure that customers walk away from their experiences with Sivana happier than they were before, whether it’s by resolving an issue with an order or educating customers on the meaning of different symbols or deities.

“They’re buying a product from us and they’re spending money, but what are we really giving them?”

“We want to give [our customers] more than just an object,” says Benn. “Our big focus is on what kind of value we are giving customers. They’re buying a product from us and they’re spending money, but what are we really giving them? That’s something we’re always thinking about.” 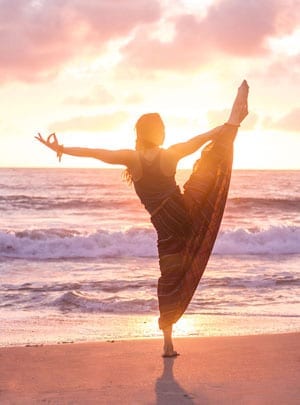 nn finds that customers are often drawn to certain symbols, materials, or statues, but they don’t always know the meaning or origin. “That’s why we started our blog,” he says. Featuring posts on topics such as yoga philosophy, essential oils, or Buddhist facts, the blog helps to bring Eastern spirituality to a wider audience.

“Wearing sacred symbols, such as the ॐ Om symbol, or the mantra ओं मणिपद्मे हूं, Oṃ maṇi padme hūṃ, is a great daily reminder to yourself of your true higher potential, but it’s also a way to introduce others to something that has deep and powerful meaning,” says Benn.

It’s the idea that what you wear can hold intention, revealing on the outside what’s on the inside—style as a true expression of who you are and what you value.

All of Sivana’s products are fair trade. One of Benn’s dream projects is to capture the creation process and share it back with their customers.

“There are Tibetan healing bracelets made by artisans that use the creation process as a form of meditation, meditating on the nature of impermanence while they’re creating them … combined with materials known to have healing properties, such as turquoise, coral, and copper … so the entire process, from creation to the person wearing it, holds energy and intention,” he says.

“A lot of this stuff is very, very powerful.”

Consumers are increasingly interested in knowing where a product comes from, and every purchase they make, including on Sivana’s site, is a vote for a larger concept or ideal. Benn says it’s this interaction and dialogue that fosters value and meaning beyond what they do as a business. People will even write to the company and share their life stories.

“We’ve had customers write to us about what they’re going through in their life, and we truly feel for them. We like to send them something to help them get through whatever it is, because a lot of this stuff is very, very powerful … Even if they’re not our customer yet, if they took the time to share their experiences with us, we really appreciate that,” he says. “It even helps us as individuals within the company learn a lot about ourselves and practice compassion.”

As we learn with yoga, it’s the intent, energy, and choices we make and what we reflect out into the world that makes all the difference. It’s what turns style into substance and business into a positive exchange of energy—a vehicle for even greater awareness and dialogue. What I discovered in speaking with Benn is that the sacredness of style comes from the people creating it.

Kara Fujita Jovic believes in the power of the breath to center the soul, that love is a super power—for it always speaks the loudest—and that dancing in the kitchen while singing Bob Marley’s “Three Little Birds” may just infuse a meal with magical powers. When she’s not getting caffeinated on fresh air, sunshine, or the sea, you can find her creating, exploring, writing, and helping people find their own personal om.