Skip to Main Content
I never imagined myself an activist. I didn’t have to. I am a white, healthy, social entrepreneur who has benefited from privilege and opportunity my whole life. I didn’t feel like I had to be against anything because I benefited from most everything. That’s not to say I have not experienced blatant gender discrimination, whether it be in the boardroom, the yoga studio or social media… But that is not why I resist. I resist because I think we can and need to do better for ourselves, our community and country. And because we are ready to stand up and act towards that end. I believe that when we #COMETOGETHER in this way we can help change the course of our society, from disconnection and dysfunction to connection and collective power.

For me, The Resistance is a practice not unlike yoga or meditation or Tai Chi. It calls us into alignment with our values. And it invites us to be bold, get courageous and take risks on behalf of one another. Given the prevalence of fake news and false narratives (stay in the know with this), I’m here to bust up some myths you might have about what the resistance is or isn’t so that you can find your way in.  Myth #1: The Resistance does not have a vision. I can see how you might feel that way, especially during a time when it is so critical that we defend and protect our communities. But this movement isn’t just about dismantling the beliefs and systems that are holding us back, it is also building a new inclusive ecology that transforms our society from the inside out. The Women’s March  that occurred last January did a great job of articulating our mission and putting forth unity principles that pave the way forward.  Myth #2: The Resistance is too negative. One of the things I’ve heard most often is resistance to the word “resistance.” The idea that “what you resist persists” But what we are fighting against is the same as what we are fighting for. By resisting what is unjust in our society, we affirm who we are and what we value. We resist oppression to advance liberation. There is nothing more aspirational than that. Myth #3: The Resistance is violent. The Resistance takes its cues from the great non-violent resistance movement. From the Quakers to Ghandi to Dr. Martin Luther King, this movement understands the collective power of people who are centered in values and ready to act. We employ non-violent tactics like symbolic protest, civil disobedience, boycotts, tax resistance and creative expression. And it’s working. Myth #4: The Resistance is in Washington DC. The Resistance isn’t a place. It’s a way of being. It’s everywhere we are and choose to engage. And it’s not governed by any one institution, but rather a weaving of many movements, organizations and people who are standing up and demanding better for themselves and one another. It’s in our homes, on our streets, at our town halls, on our mobile phones and more. Myth #5: The Resistance is up to you. The Resistance needs all of us showing up in our power and fighting for love and justice for all. Wellbeing is only possible with the full participation and realization of all of its parts. There is no room (or time) for “saviors” in this movement. We need everyone calling their reps, marching in the streets, and stepping into the arena. Myth #6: The Resistance is about you. The Resistance is about #allofus experiencing the freedom and safety to thrive in America. But it’s especially about our most vulnerable communities—those who have specifically been targeted by this administration. While there are many of us who are newly waking up and engaged, many more have been woke for a long time—not by choice, but by necessity. It’s time for us to listen and learn. Myth #7: The Resistance is futile. While last year's election was heartbreaking for many, November 9 marked a new day. People gathered in living rooms and offices. They asked hard questions and had courageous conversations. And they took risks. What began as a simple Facebook post calling women to march on Washington the day after the inauguration soon became the largest demonstration in the history of anything. Ever.

The Power of People

That 5-million-person march was quickly followed by actions in over 25 airports around the country protesting the so called Muslim ban. The next week, the Capitol reported the busiest day in switchboard history when the movement called in their objections to Betsy Devos and Jeff Sessions. And soon after, people flooded town halls and overwhelmed congressional offices to save Obamacare and won. Something remarkable is happening in our country. It has nothing to do with our presidency and everything to do with us. We can’t help but feel it: mixed in with the fear and uncertainty of this moment is a courage and commitment to a vision where everyone belongs. We need a citizenship that is rising to the occasion. It’s not the kind of patriotism which places our love for our country above our love for one another. It’s a citizenship of humanity. It’s a resistance of love. And that's what yoga is all about. For more information about how to take your yoga off the mat, check out organizations like Kerri Kelly’s CTZNWELL, committed to fighting for access to wellness for all. — 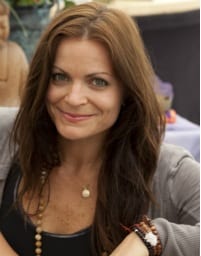