Niki Saccareccia is a teacher at Wanderlust Hollywood. Come practice, listen, taste, learn, and gather with us at our new center.

This is part of a month-long series on Wanderlust about how items and practices came into being.

I recently had a bank teller ask me what I do for a living. When I said, “yoga teacher,” he replied, “Oh, like… Aum yoga?” He drew out the syllables, his hands bent up in a casual chin mudra.

It’s no secret that yogic symbolism and lifestyle regalia is now so well-known that they have become stereotypes. The infamous “Aum” is no exception. Teachers often lead students in making this sound at the beginning and end of a yoga class. It’s also often the bookend for chants derived from Hindu tradition (ex. Aum Shanti Aum). Hindus believe that the sound Aum is the embodiment of universal essence—the original sound of the universe.

OK… So if God created Aum, it’s bound to have an interesting backstory. Thought to originate from the Hindu Dharma in the Vedic tradition, ancient India’s great literature touts Aum as the symbol that represents the nature of the universe. Based on Hindi worldview this comprises the spiritual journey out in the material world, moving from the mundane to the sublime.

But let’s go back to that “original sound of the world” bit. In Hindu cosmology, Aum is a bija mantra, or sacred seed sound, which created all other sounds and vibrations in our universe.  Aum was the original vibration that rippled through pure enlightened awareness, creating the complicated and intricate patterns of our individual consciousness. The Vedas describe this sound as the unmanifested state of Brahman that later became countless variations of material and metaphysical life. Interestingly enough, there’s some shared idea about this between the Hindi worldview and contemporary quantum physics (ie: String Theory).

From the Radiant Sutras, it is the proverbial “hell yes!” used to exalt the aphorisms passed down by our ancient yogic ancestors through verse and script. It’s regarded as the sacred affirmation, used to recognize the Krishna consciousness in the mundane and microscopic details of ordinary life and implemented in religious rites, chanted meditations, and prayerful celebration. If we could eavesdrop on our universe from Brahman’s estate itself, we would hear the ever-present Aum as the constant in the infinite wave of life cycles playing out simultaneously.

Whether used in jest, regaled in prayer, scribbled through fashion, or felt on the unconscious plane after a sweaty asana practice, the infamous Aum is the sound of Samadhi itself. Samadhi is the spontaneous uprising of divine embodiment brought on by yoking the mind with the body physical.

Joining with the divine nature of life itself is an active—and often lifelong—practice many yogis and other spiritual practitioners take on. Reached at the pinnacle of concentration, we unite with the supreme love of god spirit, dissolved from our differences. Aum, in symbol as much as vibration, is the sound of Samadhi itself. 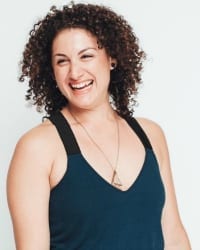 Niki Saccareccia (E-500) is an author and Clinical Behavior Therapist. Niki’s insight into personal transformation is a unique and rare blend of methods from Western Psychology and Eastern Wisdom Traditions. Her approach is practical and concise, blending the best elements of alignment and mindfulness teachings into her classes. For more about Niki, visit www.lightinsideyoga.com, and check out her recent children’s book project, Sweet Dreamer, here and @sweetdreamerbook.