Michael James Wong, yogi, teacher, meditation leader, author, and founder of Boys of Yoga has had just a bit of experience working to shatter gender stereotypes. It’s no secret that the idea of gender—and how traditional roles have been assigned and adhered to—is in the midst of a revolution. It’s been just about a year since #MeToo went viral, and 23 years since R.W. Connell published her seminal discourse on masculinity, which first coined the idea of “toxic masculinity.” Behavior once excused with “boys will be boys” platitudes is no longer accepted, and expectations for “male” and “female” are undoubtedly shifting. Michael James believes that the practice of yoga—the personal quest for societal acceptance that we are all one, that no being is free until all beings are free—can play a prominent role in helping us unravel lifetimes of these detrimental social constructs.

We asked MJ to share with us his thoughts on the idea of toxic masculinity, #MeToo allegations within the wellness community, and how yoga can help.

Wanderlust (WL): How would you define “toxic masculinity”? What are some of the characteristics, and how can you identify it?

Michael James (MJ): For me, toxic masculinity is something that has no place in our society. It is a disconnect between who we truly are as human beings: Equal, connected, loving and unified; mutated into misguided and antiquated ideologies and social ingrains driven by ego and false perceptions of gender relationships. The basic idea of toxic masculinity is that there is a separation and hierarchy between genders, and that men have a role, right, and status that is above women. This is not true, but it is believed at a societal level. It becomes toxic when these false social pretenses are challenged or threatened, creating reactive outbursts in order to remain or attain the ego-centricity of this idea. Toxic masculinity often shows itself in the form of physical violence or verbal abuse, but can also arise in subtle conversations, gender stereotypes, and everyday social degradation—all of which are disrespectful and counter-productive to our connectedness and evolution as humankind.

WL: But it’s 2019. It seems so outdated to adhere to traditional conceptions of  gender and gender roles. Why do you think they stick? Why do we have such a tough time moving past these stereotypes?

MJ: Like it or not, we are all creatures of comfort and familiarity. We learn from the past and often carry with us our social upbringing into our adult lives. It’s only been in recent decades that we’ve started to wake up to our misguided misappropriations of the past and move forward—and away—from the the hierarchal structure that was so readily accepted as the norm. Many families, much like mine, many schools, much like mine, many social structures—even the most progressive ones like the one I was raised in in Santa Monica, California!—were structured as patriarchal. Add on the proliferation through the media and mainstream culture, we were indoctrinated to an ideology that idealized men in a dominant gender role. But the time is now. Things are changing rapidly and I believe our society is in a place where we are all ready to move forward together. It won’t happen overnight, there is a lot of work to be done, or un-done, but many first steps have been taken.

I believe our society is in a place where we are all ready to move forward together. It won’t happen overnight, but many first steps have been taken.

It’s been a beautiful journey to watch as the world wakes up to the recognition that gender roles are no longer relevant in the esoteric standard. Like all stereotypes, toxic masculinity come from a place of the past, old traditions passed on, old habits accepted in a modern context. And as men we have a responsibly to be understand that we are human first, men second. And that in this acknowledge, we are first and foremost equal to all others, no better, no worse.

WL: What role can yoga—or any mindfulness practice—play in helping to overcome tendency toward toxic behavior?

MJ: The role of yoga, mindfulness practice, and meditation are very simple: to expand our awareness to the life and choices we are making and experiencing; to become more in-tune with what is real and relevant to living life with love and kindness to ourselves and each other. Toxic behaviors have no place in any form, and the more we become aware of the moments when toxic tendencies occur in thought or action, we start to enable everyone to work toward moving forward as humans, rather than allowing the esoteric upkeep of being ‘a man.’

WL: Let’s be real: It’s not as if the wellness world has been immune from #MeToo. Can a person be mindful and still participate or engage in this kind of toxic behavior?

MJ: We are human, and in acknowledging so we must accept that we are not perfect, and at times our actions don’t match our best intentions. I believe that to live mindfully is to continue to curate an approach to life that is considerate to all, compassion to ourselves, and to each other. Throughout our life we will take many steps backwards, but we must always keep our focus on the steps that move us forward.

The more we become aware of the moments when toxic tendencies occur in thought or action, we start to enable everyone to work toward moving forward as humans.

WL: But at what cost? Because the wellness community is so often touted as a ”safe space,” is there additional detriment when toxic masculinity is  displayed in this world?

MJ: The wellness community is a space that is should never been held to a different regard when there is ego-centric behavior that is disrespectful, harmful or patronizing to women, or men. These characteristic or actions displayed within our community are not welcomed in any form, and while often the space is touted as ‘safe and sacred’, it’s only as strong and supported by those of us within it to keep it that way.

WL:  At least one very high-profile #MeToo story in the  wellness world was perpetrated by a woman. Does the behavior have to be perpetrated by a man for it to be toxic masculinity?

MJ: I think we spend a lot of time in society and modern culture trying to define too much. Toxic masculinity is a defined term that identifies gender inequality and irresponsible actions that come of it. In believing that we are all equal, none of us better—or worse—than anyone else. We need to move away from the labels and definition of whether or not it’s “toxic masculinity,” and spend our time moving forward away from any form of violence, degradation or separation in gender, society, and culture. We must move towards a culture of respect and support.

WL: Have you witnessed—in yourself or others—tendencies of unmindful behavior  that were overcome through a dedicated practice?

MJ: Throughout my life I’ve had moments where I’ve had thoughts and actions that I’m not proud of, but I’m also not imprisoned by them. I’m a work in progress like everyone else. Social upbringing has left triggers to assert gender (male) dominance deeply ingrained within many men, but through the practices of meditation and yoga—and in conversation with peers, friends, teachers, men and women alike—I’m working to allow the past dictate any thoughts and action of the present, and future.

In my life today, it’s rare to see noticeable toxic actions, but it’s the subtleties of thoughts, perceptions or ‘defaults’ that continue to be dissolved. In yoga and meditation, practice never makes perfect, but provides an opportunity to be acutely aware, and in these moments, release negativity in thought and create kindness in action. The ego has no place in it. Speaking from personal experience—and seeing it in my students and peers—I’ve seen many men take to the mat and meditation practice and learn to let go of the need for the ego to be fed, and stereotypes to be sustained and move forward, one day at a time, better than the day before. 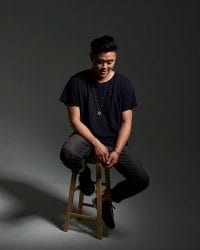 Michael James Wong is a Global Yogi, Founder of BOYS OF YOGA & JUST BREATHE and the recent author of Sit Down, Be Quiet, a modern guide to yoga and living mindfully in the real world. Michael is recognized around the world as a leading voice in the global wellness movement for yoga, meditation & modern mindfulness. Michael’s passion is to inspire the masses about the benefits of a mindful way of living on and off the yoga mat, every single day. Born in New Zealand, raised on the beaches of Los Angeles and now London-based, Michael travels the world as a keynote speaker, yoga teacher, and meditation guide bringing the benefits of modern mindfulness into the real world. Michael’s relationship with wellness spans over the past decade and half & his work is heavily influenced by some of the most inspiring modern teachers, spiritual leaders & global influencers around the world. Follow him: @michaeljameswong and @justbreatheproject @boysofyoga