Marianne Williamson is just one of the luminaries you can learn from at Wellspring this October. For tickets and more information, click here. Wellness industry professional discounts and scholarships available.

Warm up for Wellspring with Marianne's challenge with our friends at Commune. For more info, click here.  Marianne Williamson is an internationally-acclaimed author and speaker whose best-selling books have become essential New Spirituality reading. You've likely seen her on TV programs such as Oprah, Larry King Live, Good Morning America, or Bill Maher—or even at a Wanderlust event. Kerri Kelly is a spiritual disruptor and the founder of CTZNWELL, an activist organization working to expand wellness access. Kerri launched the CTZN Podcast last month, and sat down with Marianne to talk about "the relationship between spirituality and politics, how to be a strong woman in today's world, and getting back to loving America again." Read on to be inspired and motivated by an excerpt of that conversation, and then join both of them at Wellspring this October in Downtown Palm Springs! For more information about Wellspring, click here. CTZN Podcast is for truth seekers, bridge builders and emerging activists who are yearning to make a difference. We want to reimagine citizenship—not the kind the requires documents and papers. Trust us on this one. To subscribe on iTunes, click here. Kerri Kelly (KK): Welcome Marianne Williamson. Marianne Williamson (MW): Thank you. I'm glad to be here. KK: Since the election a lot of people, especially a lot of people in our community, have been starting to see that the personal is in fact political, and have been leaning in and becoming more active in civic engagement and politics. So, can you share a little bit about your journey of becoming politicized in your life and in your spiritual practice? MW: I don't see politics so much a part of my spiritual practice. I see it part of my human practice and I see my spirituality as about being human. I don't see spirituality as a separate category of existence. Here's relationships. Here's the body. Here's finances. Here's career and then over there is another category called spirituality. KK: Right, like “now I'm going to be spiritual." MW: Well, spirituality is the underpinning to everything else we do, because spirituality has to do with self identity. Who am I? What is my relationship to the universe? What is my relationship to the earth? What is my relationship to other people? What is my relationship to tribe? So, if my relationship to one person matters, then my relationships to larger groups matter. If my relationship to my family matters, then my relationship to my community matters, and my relationship to my country matters and my relationship to my species matters. So, you know the original Latin root of the politics mean "of the people." So, I don't get precious with words like "spirituality" and I don't get precious with words like "politics," getting in to politics, getting in to spirituality. I think seeing any of those things, those types of things as separate categories is delusional. It all has to do with who we are as people and the stand we take, on whatever meaning we ascribe to, and whatever values we believe in.

If you want to heal a plant, to bring a plant back to live, you can't just water the leaves, you have to water the roots. And that is what's happening with our democracy.

KK: The new politics. MW: This is something that's been a little bit eclipsed and hidden for a while, but it's really the reemergence of a conversation which was already brilliantly and eloquently articulated by [Dr. Martin Luther] King, by Gandhi and by others who knew than an internal as well as external shift would be necessary in order to fundamentally change the world. I think at this point, and I think that if Dr. King were alive he would agree, I think we are clearly at a point where it is as true now as it was in his time when he was dealing with racism and the underlying racism that was at cause in the institutional horrors, such as institutionalized white supremacy, segregation in the American south and so forth, that we need that metanoia now. We need that change of heart now, just as urgently or any external changes we make will not be fundamental. You can't just water the leaves. If you want to heal a plant, to bring a plant back to live, you can't just water the leaves, you have to water the roots. And that is what's happening with our democracy and I think that the left is often far too focused on external issues. If we get it right with immigration or we get it right with the environment, or we get it right with food, or we get it right with income and equality or we get it right with education. But, there's an underlying problem, which has poisoned all those areas, which is basically the hostile corporate take over of our government. The under influence of money on our politics. The fact that we are willing to give short term economic gain to multinational corporations, to give those financial profits and short term gains precedence over the health and wellbeing of our own planet and our own children. That's the underlying poison. And we have to look into our hearts to see what's going on there. And there are so many issues that have to be looked at internally, I think, before we can address them externally in a way that fundamentally makes a change. KK: Well and a lot of what you're naming, whether it's capitalism, white supremacy, colonialism, are all a part of our core wounds. MW: Well yeah, but I'm not enroll ... You just said something that I'm not enrolled in. I'm not one of those people who sees capitalism in the same category as colonialism. KK: Runaway capitalism. MW: Yeah. Capitalism that has deviated from its ethical core. And some people would disagree. Some people think that capitalism is inherently evil. I don't. I think that it is a ... capitalism ... Even Adam Smith said that it cannot exist, it cannot thrive outside an ethical core. So, I don't ... I think it's the deviation of mono capitalism from and ethical core that is a problem. 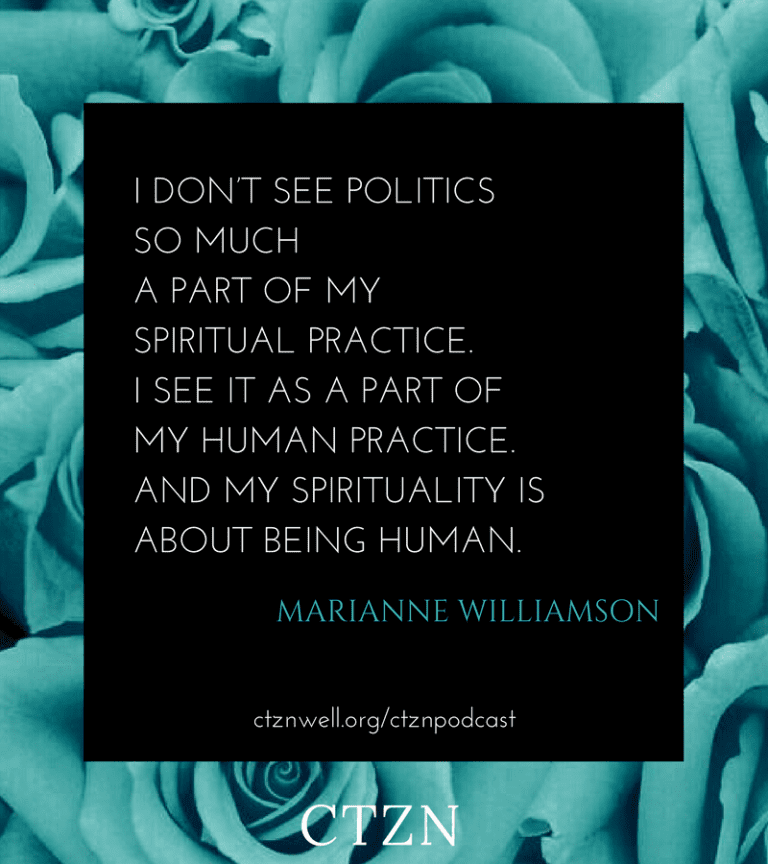 KK: Okay, I want to shift gears. You recently posted on Twitter, this. "The old, I'm gonna call it paradigm, American women think, 'Wow, that seems crazy to me' but keep their mouth shut. The new paradigm is that American women think, 'Wow, that seems crazy to me,' and then they say, 'No.'" And so I want to ask you about being a strong woman. Because I can relate to being an outspoken woman, but I've also been called a bitch. I've been called ambitious. I've been called aggressive. I've been made to feel unwelcome. I've been made to feel invisible and you too, move in male dominated spaces, whether it's politics or publishing or business. And so, how do we handle that? Right? There's this #MeToo movement, there's clearly this uprising of women reclaiming their voice and their place as a part of the whole. And yet, you know still in our culture, strong women are characterized as too aggressive, you know, too strong, too violent, I mean, all of the things. So, how do you deal with that personally, and what do you think is our role as women to disrupt that? Because I also believe that our voice is really necessary and we kind of need to blow through that. MW: That fact that our voices have been so systematically silenced for so many centuries has not only oppressed women, it has not only hurt women, it has hurt the world, because we are driving with only one light, rather than two headlights. So, it has hurt the entire world that history, modern history, has been forged with only a male dominated, rather than and equally shared perspective between men and women. I've certainly been called a bitch, a lot. It's funny that you say that you've been called ambitious. If a man is called ambitious it's considered a compliment. KK: That's right. That's right. MW: So, I think that we all realize that there's an issue here, that quote, unquote, "strong women" are likely to be looked at a certain way and defined a certain way and described a certain way and criticized a certain way. Not just by men, by the way, but at least as much by other women, I am sad to say, as by men. So, first of all, just us having that conversation right there, knowing that game for what it is, and speaking to it when we hear another woman criticized on that basis. Not shutting up right there. I have always felt in my career, that I wasn't saying anything everybody I know wasn't saying, it's just I was saying it when the lights were on and the microphone was on. I have a career saying things that everybody I know is saying but they're saying it sort of in whispers or late at night on the phone and you hear people say, "That sounds crazy to me." If it sounds crazy to you, it's probably because it is crazy.... Don't just whisper it, girls. Shout it from the mountaintops. — To hear the rest of this conversation, subscribe to the CTZN Podcast. To get even more Kerri and Marianne, join us at Wellspring this October. Let's change the world—together.