Skip to Main Content
A Medicine Reading Ceremony at The Space by Mama Medicine. Photo by Stevi Sesin
The room smells of palo santo and sage, and is decorated as you’d expect a wellness space in Soho to be: White walls, crystals and plants on every surface, pillows in pale pinks and purples arranged in a circle on the floor. Behind the check-in desk is a circular shelving unit built into the wall that houses several large jars filled with dried herbs and teas. I can’t help but feel butterflies in my stomach as I see Deborah Hanekamp sitting serenely on a pillow in the circle, holding space for the women entering. I’ve followed Mama Medicine on Instagram for years—as is often the case at events like these, it's a bit like meeting a celebrity. I was there for a Medicine Reading Ceremony, a group healing circle capped at 10 people that Deborah hosts a few times a month. She was wearing a light and airy white flowing shirt and jeans, and had a smile that was immediately calming. Full disclosure: Though I’ve long been a fan of hers, I still walked into the room with a certain degree of skepticism. A medicine circle? Led by a white woman in one of Manhattan’s poshest neighborhoods? Cultural appropriation much? Once the group had filed in and her assistant shut the door, Deborah opened the circle by inviting everyone to say their name, and their personal definition of healing. She then described what the circle would entail, and gave us a rundown of her training—eight years in the Amazon (eight!), studying with various teachers from varying lineages and backgrounds. My inner skeptic cowed her head. “I consider myself a seeress,” Deborah told me a few days later by phone. She has felt called to this type of work since she was a child. “I really was a very spiritual kid,” she says. “I was not as into dolls as I was going outside and looking at different rocks. I was a little bit of a strange kid in that way.” Her family was Baptist, and tradition dictated that she wouldn’t be baptized until she was in her 30s. When she was just eight years old, Deborah practically demanded that her pastor baptize her because she felt such a strong calling to deepen her relationship with the spiritual world. “I also always could see auras around people,” says Deborah, which is how she came to call herself a seeress. “By the time I graduated high school I had realized there was really no school that you could go to that I was interested in… So I just began putting myself through training.” [caption id="attachment_122458" align="aligncenter" width="768"] 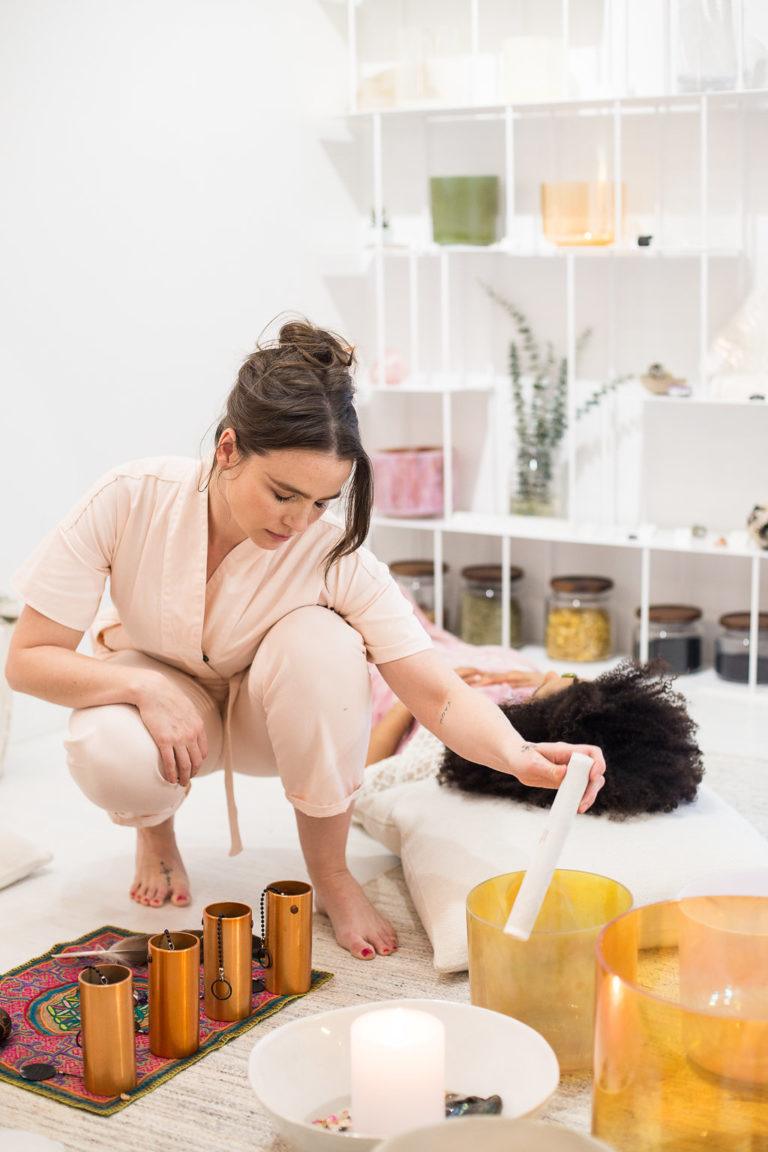 The Path to Become Mama Medicine

Deborah first began practicing Zen meditation, and was then called to do a yoga teacher training. After that, she made her way to Thailand, where for five years she studied sound healing, crystal healing, and Reiki. The next phase saw her traveling back and forth from the Amazon jungle for nearly a decade. “I studied what is here called Shamanism, but there they just call it healing,” says Deborah. “It's basically healing with plants, specifically Ayahuasca.” Once she received her initiation, however, Deborah realized that she didn’t necessarily feel called to work with the Grandmother Plant. It wasn't really until after she had her daughter that Deborah's vision for the type of work she wanted to do crystallized. “After having her I really felt true confidence in who I am,” she says. She finally felt that she need not hide behind any tradition or lineage to offer what I can just do very naturally. “That's what I asked the universe: ‘OK, well what do you want to work through me?’ And that's when I got the name Medicine Readings. That’s also when I got a whole formula for it and how it's meant to be practiced,” she says. The rest is history.

To experience the full effect of Deborah’s work, a one-on-one session is recommended—though the Medicine Reading Ceremonies are powerful in their own right. Once introductions had been made (and Deborah humbly quelled immediate doubts by revealing her education), we all laid, head-to-circle-center, on pillows and heated pads. Deborah began by invoking a mediation and guided breathwork, and then began sharing the art of Icaros, sacred songs from the Amazon, passed down in the oral tradition. “The Icaros is not necessarily a hymn, in the sense that there is no reference to a god-figure,” she told me. “Traditionally, all the Icaros are calling in the animal, plant, sky, the Earth; all the different aspects and elements of nature to come feel and bless and cleanse and protect the auric field.” As she sang, she presumably walked around the circle, playing different instruments and smudging with different herbs. My eyes, of course, were closed, and I had the sensation of being in an intense soundbath. Time slipped by, and I drifted in and out of deep meditation, at times feeling as if I were floating above my body; at others, frustrated that I wasn’t dropping in fast enough. The woman next to me was crying. After it was over, Deborah asked people to share their experiences, if they felt so moved. One woman immediately raised her hand, and said that she had seen a vision of an owl and a snake, and was curious about their totem significance. Deborah smiled, and kindly told her that she didn’t feel comfortable ascribing meaning to her vision. “What do you think they meant?” Deborah asked the woman. If I was harboring any remaining doubt that Deborah was the real deal, this laid it to rest.

Becoming Our Own Healer

By refusing to put her personal spin on the woman’s vision, Deborah walked the walk she alluded to previously that we were each our own healer. Though this idea gets thrown around a lot in the modern wellness world, facilitators, teachers, and leaders often don’t follow through in practice. This can manifest, for example, as over-adjusting in yoga, or considering one emotional response more “cracked open” or “receptive” than another. “Facilitators are only there to set an example and you have to do want you want from the example that you are given,” says Deborah. “If it speaks to you, great. If it doesn't that's great too. I show up as a mirror to you. Everything that you see in me is already in you,” she says. This is why she doesn’t recommend that her clients come in for a one-on-one Medicine Reading more than once a month; this signals to her that her client is relying too much on her, rather than accessing the ability to heal from within. In that same vein, Deborah doesn’t think that spirituality is some sort of elite club reserved for people who are familiar with yoga, Ayahuasca, or medicine circles. “We all are already spiritual because we all have the potential to love,” she says. “To me, the most spiritually-enlightened you could possibly be it has to do with how kind you are. Not kind in a passive way—or in a doormat type of way—but kind in a way where you can see the truth. You can walk in your truth, but you aren't trying to change other people. You're living your life with respect and honor for your environment and the beings that inhabit it, including yourself,” says Deborah. Regardless, being in her Space and learning from her in person, is a helpful reminder of that spiritual connectivity. Come see for yourself at Wanderlust Brooklyn, September 7–8. For tickets and more information, click here. —