Skip to Main Content
Catch Ida Jo playing IRL at Wanderlust Seattle this year.  Ida Jo is in California when we connected. She had just finished out a weekend of playing violin at Wanderlust Squaw Valley just northwest of Tahoe City, California in 2018—and we're lucky enough to have her back at Wanderlust Seattle this year. “I love playing at Wanderlust because there are so many chances to play, whether it’s accompanying a class or performing on stage” she says. I can sense her smile and elated spirit through the phone. Ida is a violinist, writer, and a yoga teacher of the Ghosh lineage. Her music explores the interconnectedness of humanity, and evokes a spiritual energy of both searching and grounding. Her most recent album, Language of Light, is specifically inspired by the yoga practice. “It has more of a dance-y, electronic vibe, and incorporates synthesizers, keyboards and violin effects," Ida says. The album sounds more full bodied and explorative than her earlier solo work, and the sound is unique in its use of live hand percussion paired with electronic dance music. Ida started the album with an idea of how she wanted each song to sound, and then opened it up to others to offer their insight. She is especially grateful for the insights of friend and collaborator Scott Lamps. “It’s helpful to have a fresh view on something that you’re too invested in to see clearly,” she says. For Ida, music is a form of healing. Her voice is unwavering and strong as she sings, “With the roots as our teachers / and the breath as our wings / and the quiet as the source of all that sings/ in Earth as our witness." From a listener’s perspective, It feels like an offering—an invitation to join her in celebration of our connection to the earth and each other. She expresses that light is what binds us together, and it cannot be put out.

Light is the freedom, light is a choice. Light is a language, light is our voice.

Ida grew up in Wisconsin and began playing the violin when at seven, after begging her mother to let her take lessons. “I was drawn to the sound, and I didn’t really know why. My mom wanted to make sure it wasn’t just a passing thing,” Ida says. Once she began her classical training, she took to the instrument like a fish to water. “I wanted to have a classical foundation so that I could understand the technical perspective of how music works before exploring [her own sound].” As she grew older, Ida began to combine her knowledge of classical orchestral with folk, and transformed into the passionate fiddle player that she is today. She joined a group in Minnesota that traveled around the globe performing traditional folk music, and participated in fiddle competitions—an integral part of her hometown. 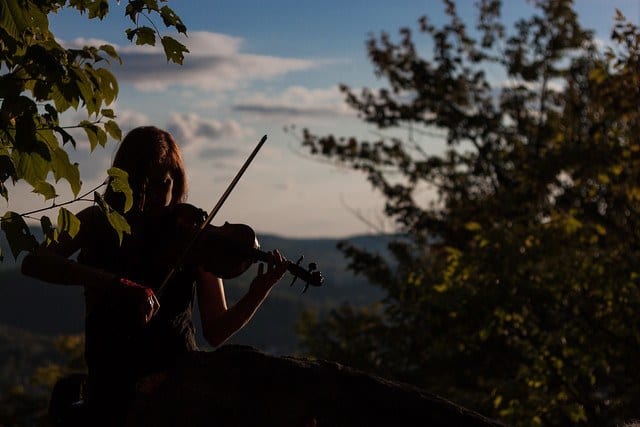 “I was really influenced by 60s and 70s southern soul and the rock groups that my mom would listen to,” Ida says. She grew up on The Band, Bob Dylan, The Staple Singers, and later on fell in love with the music of Lilith Fair singer-songwriters ,including Sarah McLaughlin, Ani Difranco, and Jewel. After studying violin at University of Minnesota, she began playing in bands and working on her own music, fusing her rock, folk, and singer-songwriter influences. With the skills to shred and a vision of the sound she wants to create, Ida’s music is unmatched in both its lyrical wisdom and unique string sound. “Most of my energy is focused on writing lyrics” says Ida. “That’s not to say that the music is secondary, but if I’m going to write something that people are going to listen to, I want to make sure that they mean something.”

I wanted to study the patterns in people, and their tendencies and energies.

Inspiration for Ida runs the gamut. Sometimes her lyrics are based on personal experience and sometimes they're more observational, specifically within her latest album. Finding inspiration isn't easy, she notes. While some ideas are more obvious, others take a little bit of digging.  “Usually I’ll be in the middle of something and will come up with an idea and try to jot it down,” Ida says. “But I don’t believe that you have to be inspired to write. I’ll sit down and write even if I’m not feeling it and see what comes out.” This view is similar to the notion that one does not have to be in the right environment or headspace to meditate. Rather, meditation should be practiced during times of groundlessness. Ida is familiar with the benefits of this work—she notes mindfulness practices have helped her become mentally and physically strong. “It takes strength to carry it all,” she says “and then make sense of it and put it out there for others. My mindfulness practice serves to make my music as pure and clear as it can be.” Ida further explains that these practices, whether yoga or meditation, have allowed her to be more aware of people around her and translate that energy into sound. Ida first discovered yoga in her hometown of Madison, Wisconsin. She notes that the practice changed every aspect of her life, particularly her approach to music. For one thing, it allowed her to stay grounded while touring. “Once I discovered yoga, it wasn’t long before I got really into it,” she says. She soon decided that she wanted to delve deeper into her studies, so she and bandmate Scott Lamps enrolled to study with renowned teacher of the Bikram lineage, Tony Sanchez in Cabo, Mexico. Sanchez is well-known in the bikram community, and Ida tells me that she first heard about him in Benjamin Lorr’s book Hell-Bent: Obsession, Pain, and the Search for Something Like Transcendence in Competitive Yoga, where he notes the profundity of working with Sanchez. In 2015, Ida traveled to Kolkata to work at Ghosh’s Yoga College and helped them to begin their teacher training program. She is now an ambassador to the college, and has since co-authored the Ghosh Yoga Practice Manual with Scott Lamps. Ida Jo’s unique history in both music and yoga has given her the opportunity to fuse the two into mindful experiences. When playing for a yoga class, she says that she often uses her own songs as a base to spring from, adding in improvisation based on the energy of the people in the room. “It’s helped me to interact with people and think more about their experience, rather than performing,” Ida notes. “In performances you end up thinking a lot about yourself, but playing for classes is a service to people’s experience.” Take a class with Ida, or simply check out one of her concerts, and you’ll see what we’re talking about. Her music is a gift, a present to those hoping to find clarity in their own lived experience. —