Explore new opportunities at a Wanderlust Festival this year. Learn More | Get Tickets

The trouble with being able to move anywhere in the world is choosing where in the world to move. That seems like an odd thing to complain about, but as a freelance writer, I could spin the globe and close my eyes. But wherever my finger lands, would that be the “right choice”?

I’m hoping many of you wanderlusters reading this relate to this quandary. Having an insatiable curiosity to see the world, learn all the languages, and hike all the fjords is…a lot of pressure. There’s too much to see, and only one lifetime. Plus, there are student loans to pay and responsibilities to uphold.

In fact, there’s a psychological gridlock that happens called “choice paralysis.” We experience it pretty regularly, actually. For example, I always get stuck on the jam aisle at the supermarket. There are so many options (Huckleberry-ginger-basil! Apricot-mango!) that it takes forever to choose. Plus, psychologists have found that having too many choices actually decreases happiness with the decision. So, when I booked a ticket to New Zealand and asked myself, “How long do I stay?” I decided not to decide.

I bought a one-way ticket and told myself I’d figure it out later.

Putting off the decision made my anxiety and uncertainty worse. A few months ago I held that one-way ticket in silent panic. Now, I’m one week from departure, feeling confident in my uncertainty. The process resembled the Kübler-Ross model, also known as the five stages of grief, with a few adjustments. Here’s what happened:

The Five Steps to One-Way Acceptance

Will I look back after a year (or two, or three?) in New Zealand and think, “But what if I’d chosen the pineapple-jalapeño jam?” I’m guessing no. Even if I get run down by stampeding sheep or roll my kayak in a fjord, it’ll still be worth it. Because it happened in New Zealand.

These steps also apply to any big life decision—whether it’s switching careers, buying a car, or moving halfway around the world. Sometimes we have to scare the shit out of ourselves. Because, ultimately, on the other side of fear is beauty, self-knowledge, and growth. Here’s to not deciding, and letting “the right choice” be whatever feels right right now.

And now, please, pass the jam.

I’ll continue to report on Wanderlust Festival in Lake Taupo, New Zealand, so you’ll be hearing from me as the one-way adventure continues! 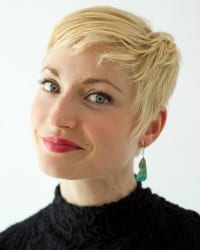 Emily Hill is a nomadic health and wellness journalist. In her travels from Albuquerque, New Mexico to Auckland, New Zealand she’s reported on everything from underground electronic music to nerdy nutrition science. Emily is an avid women’s cycling advocate and amateur yogi. Her favorite food is red wine. Follow her @EmilybyNight.