Skip to Main Content
Photo by Lance Asper
Kate Northrup is just one luminary you can learn from at Wanderlust Stratton 2019. For tickets and more information, click here. What follows is the chapter "Egg Wisdom" from her newest book, Do Less: A Revolutionary Approach to Time and Energy Management for Busy Moms (Hay House; 2019). Excerpt reprinted with permission. Book is available on Amazon, Barnes & Noble and wherever books are sold. It was an early spring day in New York, and I was wearing these kind of weird light-wash jeans that were too big for me at the waist and that, due to a tailoring incident, had a raw hem that was just a hair too short. Despite these jeans being weird-looking and far-flung from any trend, I loved them because they felt so good on my body. I had on the suede Birkenstock clogs I’d bought when I was 16, which I would wear during that time in my life when I wanted to be reminded of what it felt like to be home in Maine. My hair was in a messy ponytail, I wasn’t wearing makeup. My outfit was topped off with a tan Patagonia fleece jacket that made me look like a teddy bear because of its clumpy, fuzzy texture and really did nothing for my figure. (Let it be known that I still own these very same jeans, Birkenstock clogs, and Patagonia fleece—and wear them all frequently.) I’d just dropped my taxes off at my accountant (on time for the first time ever!), and I was feeling really good about myself. This guy stopped me on the street and asked me if I was a dancer. I was a little thrown off and wondered how the heck he knew I was a dancer (at least in a former life) but flattered, nonetheless. He was coming out of a print shop where he was picking up some of his most recent photographs and asked if I’d consider letting him photograph me. (I understand this sounds like it could have just been a super-creepy line from a super-creepy guy, but my internal guidance is really strong and none of my warning bells were going off.) I popped into the shop with him to check out his work, and it was beautiful. His eye for light and reflecting women’s beauty was striking. So I said yes to being one of his subjects and had the best time with my one experience of being an artist’s model. Have you ever had an experience like this where you haven’t put an ounce of energy into your appearance but you randomly get asked out on the street (by someone you’d actually like to go out with) or had someone who’s not trying to hit on you simply stop to tell you how radiant you are? Or had a day when all of the lights turn green for you, everyone offers for you to go ahead of them in line, and someone before you pays for your Starbucks at the drive-through? What you’re experiencing here is more than good luck or coincidence. It’s a phenomenon I learned about from my mom, Dr. Christiane Northrup, and she calls it Egg Wisdom. I ran an 11-week Egg Wisdom Experience within my membership, Origin, and the women were so enamored with the concept that I thought it deserved an entire chapter. At its fundamental core, Egg Wisdom is a phenomenon of feminine magnetism that every woman has experienced at least once in her life. Unfortunately, it is often misunderstood, feared, misused, and ignored because we live in a patriarchy that has taught us to devalue or fear that which is not traditionally masculine. But I think it’s time for us to reclaim Egg Wisdom because it’s one of the key ways that you can have more by doing less. Now, I’m not an expert in women’s reproductive health and anatomy, though I was raised by one. I believe this makes me the perfect person to explain the phenomenon of Egg Wisdom because it’s impossible for me to get overly scientific or technical, yet I still have a greater understanding of how it all works below the waist than your average citizen.

I think it’s time for us to reclaim Egg Wisdom because it’s one of the key ways that you can have more by doing less.

Before I get going here, I want you to know that if you identify as a woman, Egg Wisdom applies to you. It doesn’t matter if you’re postmenopausal, pregnant, or lactating, if you’ve had a hysterectomy (partial or radical), if you’re transgender, or anything else. Egg Wisdom is the feminine principle at work, and we all have access to it as long as we understand and employ it. In order to understand Egg Wisdom, we have to understand how the egg works within the female body. Once a month an egg is released from the ovary (at ovulation) and hangs out for a little bit being available for fertilization. The egg stays in place right where she is. She doesn’t run around up and down the fallopian tube wondering if the sperm is coming to fertilize her. She doesn’t pop down to the uterus just to check if he’s coming or hang around the cervix entrance, hoping he’ll see her there. She doesn’t check her phone obsessively or wonder if she should text him or not, even though he didn’t respond to her last text (or her last 10). She doesn’t call her girlfriends and ask them what they think she should do. Nope, she simply sits there in all of her fertile eggness, simply being the egg. As she sits there, though, she also emits a signal that tells the sperm that she’s ready and available. The follicular cells around the egg release progesterone, which actually gives the electric currents that drive the movements of the sperms’ tails a boost, and as the current increases in strength, the tails begin to move faster. The egg’s eggness actually makes the sperm faster and stronger. As my mom says, she has the ability to “egg on” and enhance what’s around her. Similarly, when the sperm finds her, there are millions of them trying to break through her barriers to get in all at the same time. But the sperm doesn’t get to choose; it’s up to the egg who she lets in. Once the egg chooses which sperm (or sperms, in the case of multiples) to let in, if there’s anything wrong with its DNA, she actually has the ability to repair its DNA and improve it. Again, she can “egg it on.” Then, in order to make the three- to four-day journey down the fallopian tube to the uterus, where the egg will then embed into the uterine lining, she has enough nutrients within her to feed herself and the sperm until they get to the next nutrient source of the uterine wall. So not only does she have the ability to signal and strengthen the sperm, to choose which one she’ll allow to fertilize her, and to repair the sperm’s DNA, she also brings a picnic. This is the feminine way. The feminine nurtures, heals, beautifies, and improves everything around her. Plus, she brings snacks, because someone is always going to be hungry. If we let the egg be our model of attraction in terms of our very blueprint for how to manifest what we want in life, it gets really juicy, really fun, and a lot less work to get what we want. If you’ve ever studied Abraham-Hicks, you’re familiar with the concept of allowing. There’s the ask for what you want. Then there’s the allowing it to come to you. The egg is really good at allowing. She’s the perfect leader for us, as women, in what it looks and feels like to allow our desires to come to us. Because we were taught how to get what we want by a patriarchal culture that always defaults to the lived experience of a man and the masculine way, though, the way of the egg has not been celebrated or taught. In fact, many women I work with tell me that when they take a break or aren’t hustling with everything they’ve got to get what they want, they feel lazy or think they’ll never achieve anything. Let me tell you what. The egg is not lazy. She has the makings of nearly an entire human within her. She’s able to repair the DNA of a sperm and also nourish herself and the sperm until they make it to their final destination. She is not lazy, but she also doesn’t waste her precious energy and resources running all around the uterus looking for the sperm or worrying about whether or not it’s coming. And by the way, if this month is not her month to be fertilized, she disintegrates within 12 to 24 hours and gets  reabsorbed into the female body or simply passes out with your period. She doesn’t fight. She doesn’t freak out. She lets go and moves on. I want you to know something for sure: Your body is wired for Egg Wisdom. This is not something you need to take a course on or get certified in. You do not need to make 100 vision boards, visualize diligently every single day for 20 minutes, or watch your thoughts like a hawk, having a meltdown every time you think something negative because you think that’s broken the spell of attraction.

Click through on the image below to learn more about Kate's book! 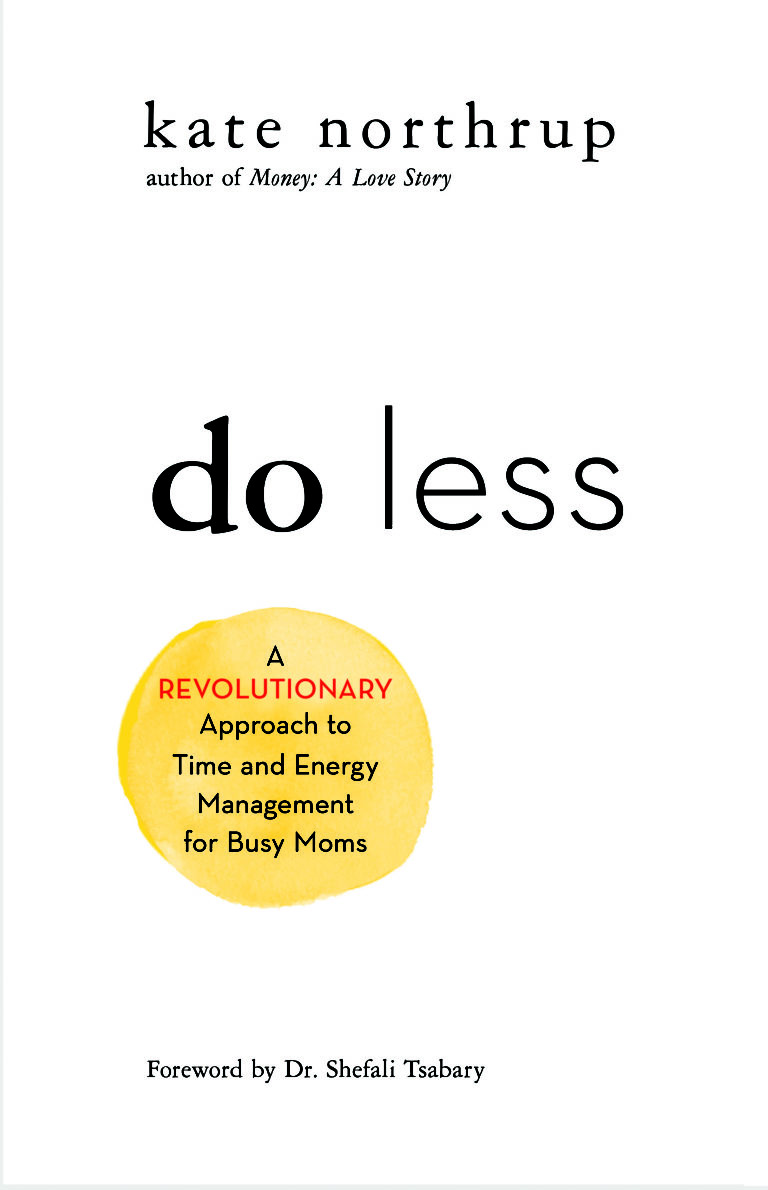 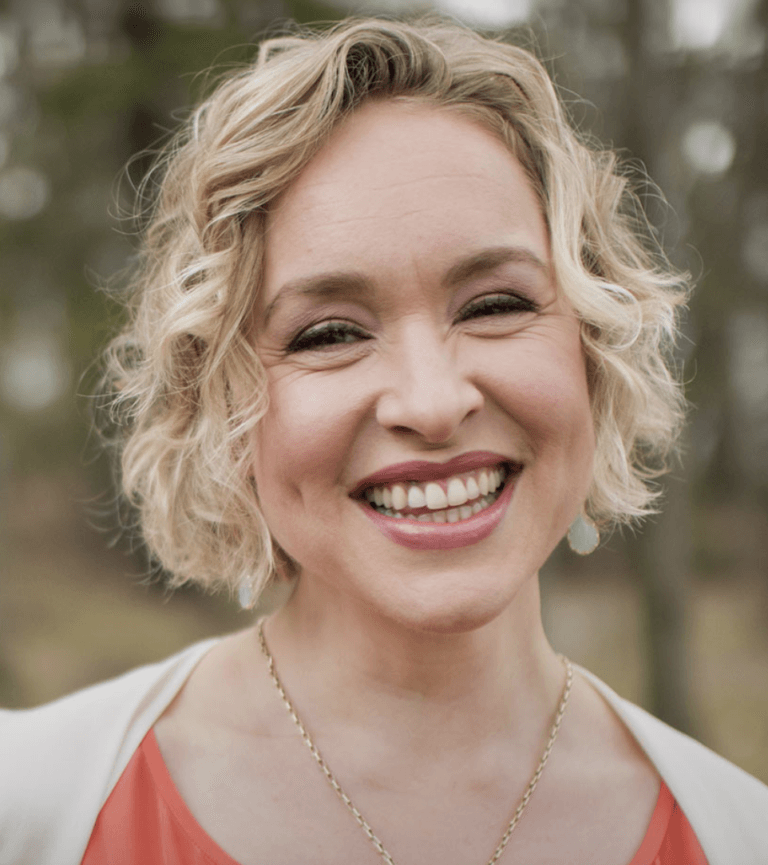 Kate Northrup is the bestselling author of Money: A Love Story and Do Less, an international speaker, and a creative entrepreneur. She is committed to supporting ambitious women to light up the world without burning themselves out. Kate and her work have been featured by The Today Show, Yahoo! Finance, Women’s Health, Glamour and The Huffington Post. Kate lives with her husband and business partner, Mike, and their daughters Penelope and Ruby in Maine. Get a free guide on 3 simple ways to have more by doing less at katenorthrup.com.