This story is a part of a series called Do It And Then You’re Doing It, in which we attempt to inspire you to step out of your comfort zone and take your life to the next level.

“You just have to keep swimming,” said the twiggy teenage girl next to me. She must have been very confused. This was my first ballet class. Not swimming. I can swim just fine.

We were in the center of the floor learning footwork when she gave me those words of encouragement. The class was labeled as intermediate, but everyone in there looked like a goddamned professional. I tried to find a beginner class, I really did. After an exhaustive search, I decided my martial arts and a yoga background made me highly adaptable.

Like all good new students, I knew that when I started dancing I would have to buy gear. This, I thought, was the first step in feeling prepared for the unknown. However, when I walked into the studio and saw all the people waiting for the class to begin, I became so overwhelmed that I nearly threw up in my slipper. I felt so awkward because they all looked so professional. I was sure they were going to take one look at my green face and laugh me right out of there.

But I’m a bit of a refined masochist, so I laced up my shiny, black shoes and took the ultimate walk of shame.

As class began, I made sure to inform my teacher that I had never taken a ballet class before.

“Well it’s an intermediate class so I have to teach to that level,”  she said like she was offering condolences. “Just do your best to keep up.”

Ballet is hard. Harder than I even imagined. The movement was all foreign. It was hard enough learning one new step at a time, and it really sucked to have to string 15 of them together in a phrase.

“Ok, we’ll go demi and stretch, tondu with plié, rond de jambe a terre en croix, followed by grand battement and grand port de bras,” the teacher said without demonstrating anything, because everyone in the room already knew what the hell it meant.

I nearly broke my neck trying to see what other people were doing. I felt like a complete idiot. My skin was crawling on itself. My face was burning with terror. And then I gave myself a little pep-talk:

“Stop being a little b, you came here to dance, it’s going to take time, start fucking dancing and stop being scared. Half the room is little tweens anyway, and you could take them down if need be.”

For whatever reason, it worked. I stopped caring so much and then, as if it were written for a movie, the moves started falling into place. I got some of the footwork, I nailed a few transitions. And that’s when my little branchy friend came over and suggested that I keep swimming. Not because I was a fool, but because she thought I had courage and wanted to see me succeed. I put myself out there and the people around me supported the hell out of it.

At one point, the teacher stopped class and congratulated me on my bravery. I was slightly embarrassed. Everyone else chimed in and said nice things to me. Then they started clapping, which nearly killed me. The people around me mattered, the connections felt real.

I did it. I walked into the dark with no survival kit and I came out stronger. Since then, I’ve enrolled in ballet, hip-hop, and modern dance classes at a local community college. I dance five days a week and did my first performance a couple weeks ago in front of the Mayor of San Diego with a group of dancers I now consider some of my best friends.

Now, whenever I am scared to try something new, I remember everything about that room, the wooden bars along the walls, the fluorescent lights beaming out of the drop ceiling, the smell of sweat from the class before ours, and the sense that I had never been in a moment like that before. 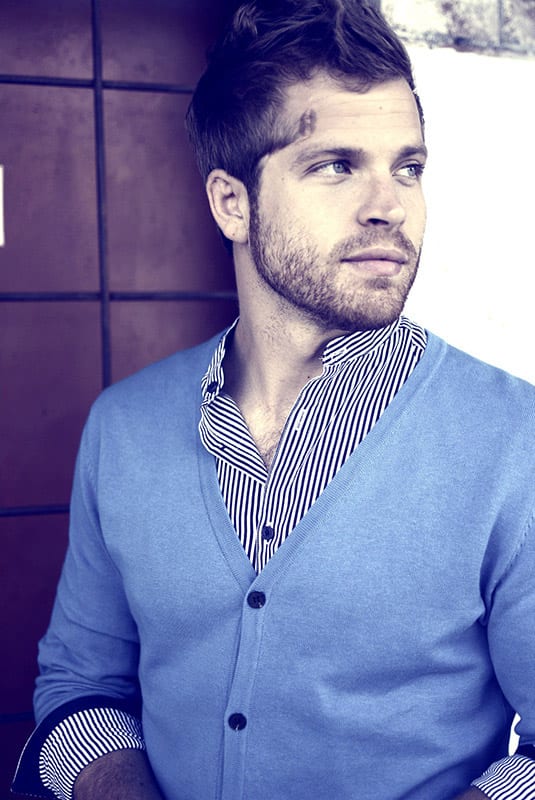 Kirk Hensler was raised in metro Detroit on a steady diet of meat, potatoes and team sports. As a competitive athlete, he relied on his power and dominant attitude to excel. Years later, when he took up martial arts, he was tossed around a sweaty dojo for months by various women and children. This led to an exploration of ancient Eastern philosophies, which, in turn, led Kirk to Taiwan, where he taught English, studied martial arts and ate a lot of delicious and strange street food. Today he owns a yoga/kickboxing/green smoothie studio in San Diego, and is the Co-Founder of the Hale Foundation – yoga/martial arts/creative arts for at-risk kids. Check out his blog, Kale & Cigarettes to keep dibs on his journey to becoming a hip-hop dancer, connect with him on Facebook, Twitter& Instagram and sign up for his bloody updates & contradictory life advice here.