Daina Trout brewed her first batch of kombucha in 2005, nearly ten years before founding Health-Ade, now a beloved brand among the wellness set—and beyond. By all accounts, Health-Ade is an unequivocal success story, with a follower count in the hundreds of thousands, shelf space at mega stores like Whole Foods and Stop & Shop, and the type of entrepreneurial street cred that comes from stoking national interest in fermented beverages, while still crafting their product in small (like, really small) batches.

Of course, success like that isn’t a linear path by any means. Daina’s story—from graduate school to corporate America, from farmer’s market maven to now-CEO—serves as inspiration and a reminder for all business owners that there may be some bumps in the road to get there—or, as Daina herself puts it: “Entrepreneurship is like falling off a horse a thousand times a day, getting back on a thousand times a day, and doing it better each time.”

Long before cofounding Health-Ade, Daina always had an interest in the intersection between science, medicine, and healing, so after college, she headed to Tufts University, where she studied Nutritional Biochemistry and Public Health Nutrition—and graduated with Master’s degrees in both. For Daina, these were critical years in formulating her perspective around what it means to be healthy, and the pivotal role what we consume plays in our overall wellbeing. She says, “My philosophy about nutrition overall was very different than a lot of the dietetics there. For me, it was a lot less about science and a lot more about the health it takes to be happy.”

“The health it takes to be happy” has become something of a rallying cry for Health-Ade, appearing in the company’s manifesto, and popping up often as a theme throughout our conversation. That simple yet profound idea is also what inspired Daina to pursue her interest in fermented foods during her graduate school years, crafting delicious sauerkrauts, kefir, yogurts, and yes, her first batches of kombucha from a scoby she acquired from a fellow student. But before she could professionally pursue her instincts and excitement around fermentation, she realized what most students do upon graduation: she needed a job, fast.

As Daina herself tells it, “After school, I got a job in corporate America at a major pharmaceutical company—the second largest in the world. Now that might seem like a big contrast from [my graduate work as a] holistic nutritionist, but the truth is I graduated with a ton of student loan debt and they were offering way better pay than anything in public health nutrition could ever aspire to.” On top of that, the company was recruiting scientists like Daina to join their nutriceutical sales team—which just so happened to be a subject she was interested in and knew a lot about. 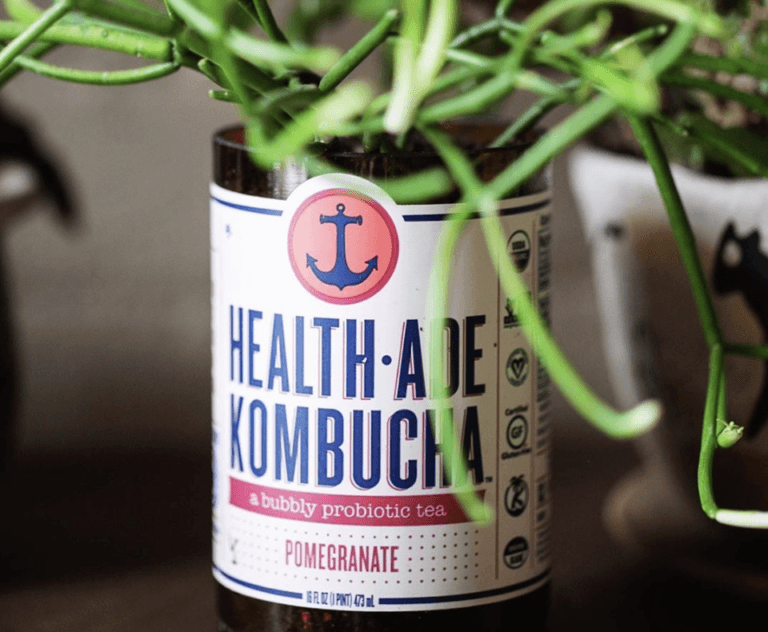 So she found herself at the bottom of a 100,000-employee totem pole, and got a taste for what it took to move up in a company like that. (Perhaps unsurprisingly, turns out it takes a lot of persistence—a quality that she still values, now as a CEO. At one point in our conversation she referred to “grit” as Health-Ade’s #1 company value.) Four years in, after repeatedly making the company’s top seller list and moving up to management to boot, she landed a special role: improve internal employee engagement throughout the entire west coast region, as a company “Change Agent.”

It was a complete pivot from her previous position. Armed with an unlimited budget (and with very little oversight), Daina embarked on a one-year tour of the company’s west coast outposts. “I got an insane amount of information on what it takes to lead teams, what it takes to drive employee productivity, and what makes a team ‘good’ or ‘bad,’” she says.

After seeing 300 teams up and down the west coast, clear patterns emerged. Good teams have great communication and hold each other accountable. Micro-managing is the fastest way to cut a team off from success. Attitudes are contagious, especially negative ones. The best leaders are in touch with their employees at least once a week for regularly scheduled one-on-one time. And overall, people just need to feel heard—even if you don’t have a solution. (Business owners, are you taking notes?)

Fascinated with leadership as a subject matter and in love with her newfound autonomy, she knew in her gut that it was time to jump ship, but wasn’t sure how. Her first step was to create an Entrepreneurs Club with husband Justin Trout and best friend Vanessa Dew. The three batted around business ideas, until one day they were offered an opportunity from a friend-of-a-friend to sell the delicious kombucha that Daina still loved to brew at a farmers market in Los Angeles—and sold out within an hour.
Health-Ade was born.

From that moment on, the three have been in what Daina refers to as “turbo mode.” Indeed, the biggest challenge they’ve faced so far is keeping up with the company’s speed of growth. And while it’s exciting to talk about huge milestones like doubling or even tripling size in a year—you know, the type of stuff investors love to hear—what it takes to keep up with that is developing a company “so much faster than what’s natural,” Daina says.

These days, Daina lives by these words from Maya Angelou: “I did then what I knew how to do. Now that I know better, I do better.” It’s a mantra of sorts, that helps her ride the ups and downs of entrepreneurship, from the complex operational issues that arise from small batch manufacturing (every brew is still made in 2.5 gallon glass jars!) to the unique highs of seeing someone walking down the street drinking a bottle of Health-Ade. (In case you’re curious, her favorite flavors are Pomegranate and Jalapeño-Kiwi-Cucumber: “I think I like that one because it tastes like a margarita, especially being eight months pregnant right now,” she says, and we laugh.)

As our conversation starts to wind down, she leaves me with this gem, that could just as easily be about life, as much as it applies to business and entrepreneurship: “It’s about getting the wins to work as much as possible for you, and trying to let the losses pass through you as fast as possible—I feel like that’s the real name of the game.”

Wise words, especially from someone who really knows how to follow their gut.