I’m not a guy who’s big on wearing jewelry (at all), though I wear a bracelet on my right wrist every day. Really. Every single day, without fail. It isn’t made of precious metals, or any sort of healing stones. It isn’t to symbolize intentions of love. No one was tying a knot, intentions of peace or wholeness infused in the process. I’m quite sure the creator wasn’t thinking much of anything at all, actually. If I had to guess—which is totally a guess—I’d say that it was made by a machine that stamps out the black powder-coated piece of straight aluminum, 1 millimeter thick, and then engraved with the words that I chose and bent by my hand to fit my wrist.

My bracelet reads: “SFC MICHAEL C. OTTOLINI” on the top line and under that is inscribed “TF TACOMA 10 NOV 04 BALAD, IRAQ”. It’s not a fashion piece. It is a memorial bracelet that I wear to honor my good friend who was killed in action in combat.

It was supposed to be a 72-hour dismounted counter-insurgent operation. The mission was cut short by a deafening early morning explosion, that erupted under our eighteen thousand pound, up-armored vehicle, sending it into the air in a ball of fire and fury that killed Mike and ultimately took both of my legs below the knee, and left me living with a traumatic brain injury (TBI).

It is a memorial bracelet that I wear to honor my good friend who was killed in action in combat.

As a combat vet and “military guy” I never expected that I would wind up as a yoga teacher. It actually still feels weird to say it. Don’t get me wrong—it’s not weird that I’m a yoga teacher, it’s just weird to say it. It’s actually the most significant work I’ve ever done. Let that land for a second… Let it sink in. Those words are coming from a guy who has led soldiers in combat; who has led teams in the non-profit world with great success and contributed to the success and growth of Wounded Warrior Project, one of the most respected and largest Veterans Service Organizations. Those words are coming from a dad to three amazing daughters. The work that I find myself in now, as you probably know if you’re reading this, is very powerful. It’s an access to healing and self-discovery unlike anything I’ve seen, and I am committed to sharing it with as many people as I can, veterans and non-veterans alike.

You see, that explosion didn’t just kill Mike and leave me with physical wounds. The explosion—coupled with a myriad of other experiences and losses from combat—left me with the invisible wounds of war. You’ve probably heard of Post-Traumatic Stress Disorder (PTSD). I didn’t have PTSD. Sure, I had trouble sleeping. I had intrusive thoughts and memories that would haunt me at all times of the day and night. I retreated… and hid in plain sight. I did a damn good job of pretending that everything was OK. My marriage failed as a result, and my oldest daughter who was 10 at the time I was wounded, didn’t have the best dad she could have had from 10 to 18.

I was an idiot.

The silver lining of my circumstance was that I actually didn’t suffer for great lengths of time. Thanks to my work in the veteran’s service space, I had learned many coping skills to work through the times when the invisible wounds started to fester and show their faces. I had tools to keep the resurfacing of the trauma to a minimum. The wounds were always there… mostly dormant, but there, and when they showed up I could take action to keep them at bay…

Teaching yoga is the most significant work I’ve ever done. Let that sink in.

All of my coping tools were physical: riding my road or mountain bike, riding horses, playing golf, fishing, hiking, climbing mountains. It wasn’t until my last surgery—my thirty-sixth to date—that changed everything. While recovering from that surgery, I was homebound on one prosthetic leg and crutches. So when the invisible wounds started to manifest, I wasn’t mobile enough to do any of the physical things I would normally do to combat the demons. I was stuck, and in a bad place and sinking deeper. I wasn’t suicidal, but I was on the way.

Thankfully a friend of mine convinced me (that’s a whole other story) to try meditation while I was still healing from surgery. That gave way to a physical yoga practice once I was back to “normal.” I can only say that I am beyond grateful for that invitation. Her gesture of offering to help a friend who she knew was struggling, changed everything for me. I had such a profound experience on my mat, that I was enrolled in teacher training before I finished my third practice. Yoga saved my life.

Since becoming a teacher I have dedicated myself to teaching veterans and warriors at every opportunity. Most vets that I know have memorial bracelets like I do. Some wear them, some don’t, but all of them experience the void that is left by who the bracelet is for. My commitment is to do all that I can to help. I teach yoga because, for me, before yoga I coped with combat stress, now with yoga in my life, I’ve healed from it. All of it. I still have all of my memories from combat, but none of the guilt or grief that used to accompany them.

I had such a profound experience on my mat, that I was enrolled in teacher training before I finished my third practice.

I have worked with hundreds of veterans and I have witnessed incredible transformations. I’ve seen warriors healed as I was healed. I’ve seen families that were broken, restored. I’ve seen miracles on yoga mats.  I have even recently started my own, very small non-profit called Warrior Spirit Retreat, which is intended to help warriors heal from the invisible wounds of war by using a curriculum grounded in yoga, mindfulness and meditation and integrated into the mindful-based recreational activities of golf, fishing and horsemanship on weekend and week-long retreats. This work… its everything.

As I pause and reflect on Memorial Day. I look down at my bracelet and remember Mike and the amazing man he was. I am reminded of the men and women, heroes all, that sacrificed their lives for the cause of freedom. Memorial Day is in recognition and honor of our fallen; and the families left with the impossible feat of carrying on without them. On this day, I remember our countless heroes memorialized at the Tomb of the Unknown Soldier at Arlington, and all of the heroes known on memorial bracelets all over the world. This day is for them. From my perspective, there is no better way to honor them than to help heal their brothers and sisters who are still with us.

So, this Memorial Day, I have one request of you: Invite a veteran to yoga. You just might save their life. 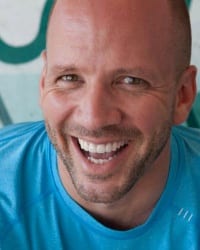 Dan Nevins is a professional speaker who has been inspiring audiences around the world with his message of perseverance, resiliency and hope for more than a decade. A highly decorated soldier, Dan was severely injured during combat in Iraq in 2004 after an improvised explosive device (IED) detonated beneath his vehicle. He lost both legs below the knee, and lives with a traumatic brain injury (TBI) and the emotional wounds of war. In 2008, Dan received WWP’s highest honor, the George C. Lang Award for Courage, and went on to become the director of WWP’s Warriors Speak program. Dan became a Baptiste Yoga teacher in 2015, and now incorporates the notion of “yoga for every-body” into his speeches and classes, encouraging people from all walks of life—and veterans in particular—to take up the practice.