It’s not every day you find yourself in a movie theater packed with a bunch of fellow yogis watching a spiritually enlightening film that chronicles the life of one the world’s yoga masters.

I smiled to myself as the lights dimmed. A pause filled the darkness before the movie began. We all waited, until a man in the back row broke the stillness by chanting Om. Others joined in. We laughed.

These are my people, I thought.

We were all there to see Awake: The Life of Yogananda, a documentary inspired by Paramahansa Yogananda’s Autobiography of a Yogi, widely considered to be a modern yogi must-read. Of course, the documentary, which was released in late 2014, wasn’t a mainstream blockbuster, so our local yogi community used a service called Gathr to orchestrate our own screening at a nearby movie theater.

Awake was well worth the wait. Watching the film was yogi heaven for me. History, philosophy, and love spilled out from the screen. Yogananda’s words buzzed with truth.

The inclusive nature of the film made it easy to invite family members who were unfamiliar with yoga. Sharing this knowledge was fun and clear for everyone. Afterward, I felt as if my family could better understand my practice. For me, the greatest reward from seeing the film was experiencing its greater impact. I was lifted, but I could see they were lifted by Yogananda’s story, too. Their hearts were lighter and they wanted to know more. Behold, world! Yoga is not just stretching!

The basis for the film, Autobiography of a Yogi, has become something of a spiritual classic, influencing the like of George Harrison and Steve Jobs. For those unfamiliar with Paramahansa Yogananda, he was a yoga pioneer when he arrived in the United States from India as an unknown in 1920. His mission was to bring yoga to the West—offering a way to integrate traditional Eastern yogic spirituality and methodology with modern Western scientific fact and reasoning. Yogananda truly embodied a shift in global understanding of the nature of self.

I’m sure that’s enough teaser for any yoga practitioner. To find out more, watch the Awake trailer above, find a scheduled screening near you, or use Gathr, as we did, to bring it to a theater near you. Enjoy! 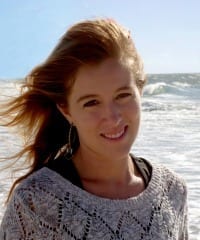 Outer truth-seeking journalist turned inner truth-seeking yogi, Nicole Harris now writes freelance and teaches yoga. Her practice on the mat began in Minnesota in 2011 and eventually led her to teaching in Florida. Her true passion is to cultivate awareness and live from that honest, real space as much as possible. She finds her quickest ways to get there are through nature, adventure, and travel. The deepest way is through a meditative yoga practice.