Skip to Main Content
A Wanderlust 108 Diary: A Day to Remember
Are you planning on attending a Wanderlust 108 in London this year? Here's what you can expect. For tickets, more information, click here. 2022 is commencing with a year of mindful triathlons scattered all over the world. Our travel mats, sunglasses and passports are now happily within reach, and we’re looking around the globe at this year’s jet-setting 108 event schedule. I have been to a handful of three-day festivals, though this was my first 108. And I’ll let you in on a secret: I was a tad nervous. See, I’m no runner. I wasn’t worried about the distance itself, just the whole “group run” thing; likely in the same way an unsuspecting first-timer feels during a vinyasa class. Upon arrival, I was immediately at ease. The vibes that morning weren’t anything like your conventional race. Rather than nerves and competition, it was merriment and a mounting enthusiasm. There were bright colors, curated costumes, bachelorette parties, couples doing “couple goal”-worthy things, acro-yoga exhibitions, people dancing, meditating, handstanding… you name it. It was all happening. The 5K timer had yet to go off, but the collective celebration had begun. [caption id="attachment_122363" align="aligncenter" width="768"] 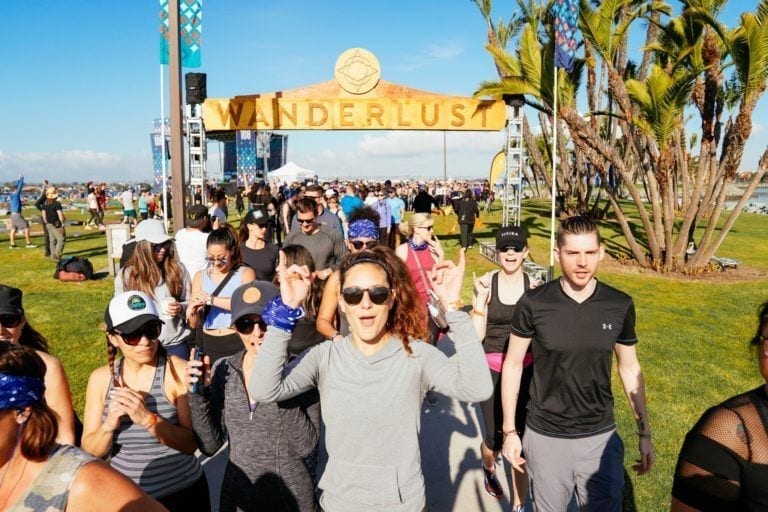 Photo by Kit Karzen[/caption] After mats were laid and hats were donned, our MC took the stage and rallied us in a group warm up. There was music. There was attitude. And—you better believe it—there were spirit fingers. This was Wanderlust, after all. With bottled up charisma and sights eager for savoring, we headed out on our run. While running, I got a flashback of elementary school. We used to have these things called “Fun Runs." But trust me on this one: you can’t just slap a title on something and expect it to be fun. This, however, was a Fun Run! There were solo runners, friends old and new jogging together, and moms and daughters walking in tandem. Regardless of your style, speed, or choice of companionship, you were as much a part of it as the person next to you. And you were rockin’ it. The forecast had threatened rain earlier in the week, though the sun must have heard Wanderlust was in town. Rightly so, she came to play. With such zest, in fact, that half way through the run I was wishing for shorts. A little retail therapy, via the coolest conscious brands set up around the lawn, aptly scratched that itch. As if the sun realized she came on a teensy bit enthusiastic that morning (this was early spring, after all), an afternoon breeze picked up just in time for yoga. [caption id="attachment_122364" align="aligncenter" width="768"] 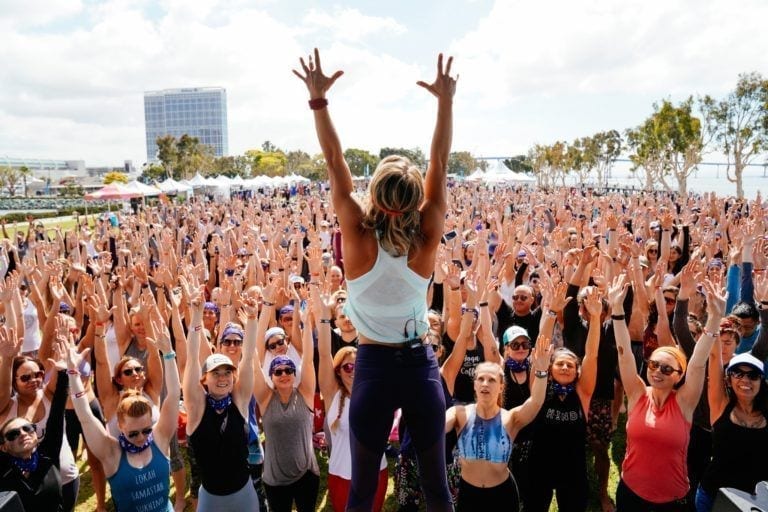 Photo by Kit Karzen[/caption] Our yoga instructor, Chelsey Korus led a practice that was the perfect blend of community, self-expression, and unleashing your inner-wild. My favorite moment in class occurred during a pause in Uttanasana—a standing forward fold. Chelsey said something along the lines of, “If it wasn’t yours to carry, now is the time to lay it down.” Right there in that forward fold, she urged us to let it slide off our shoulders, down our neck and out the crown of our head. Her words brought to mind a poem by Nejwa Zabian: “These mountains that you are carrying, you were only meant to climb." Her phrase stuck with me, and those burdens slipped silently onto my mat. Rosie Acosta’s mediation followed. It was the perfect bookend to an energetic morning run and a detoxifying yoga practice. This third-leg offering was deeply grounding. It was a moment to stray from the collective energy and to return to our individual centers, yet still with the palpable support of the surrounding community. With coastal hums and a gentle ocean breeze, I couldn’t entirely forget where we were—and was happy for that. Gratitude spilled over me, accompanied by the spring sun. [caption id="attachment_122365" align="aligncenter" width="768"] 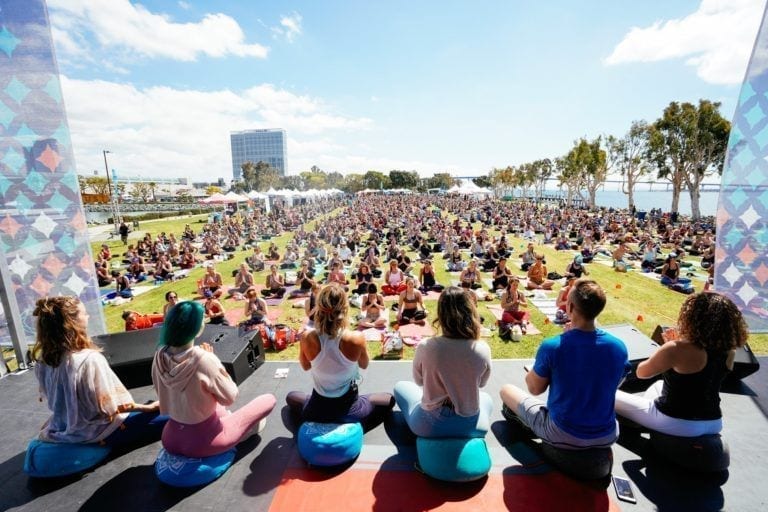 Photo by Kit Karzen[/caption] A friend once told me she feels like there is string attached to her heart, which connects her to special people she’s met from all across the world. In an abstract sense, I think this is what Wanderlust is. Strangers show up side-by-side; they celebrate community, movement, self-inquiry and connection; they become family. This is when the strings are forged. And they’re pulled taut as we roll our mats and make our way home. As this year’s 108’s continue to spread across the world, so too will these vibrant strings – weaving a broad, colorful tapestry that wraps the globe, as uniquely beautiful as the people at each end. — 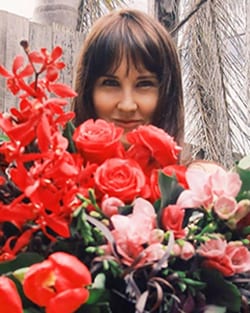 Kacey Janeen Waxler is a California-based yoga instructor and writer on the hunt for adventure and good stories. Her words can be located amongst noteworthy brands including Corona Extra, Athleta, and Darling Magazine, and in the flesh she can be found reading unapologetically from the glow of a headlamp, geeking out over sequencing, or neck deep in a deliciously hot bath. Follow her adventures at @kaceyjaneen or kaceyjaneen.com.