Skip to Main Content
Photo by Brendan Jaffer
Presented by

Once upon a time, in a strange, faraway land (New Jersey), in an era long ago (the 1970s) I attended a public elementary school that was a kind of dreamy castle for a child. It was a golden-colored, aluminum-roofed, geodesic dome shaped in a giant pattern of polygons. The inside was magical; it was all wide open-space rooms that housed hundreds of students. We often studied while sitting lotus-style on the floor with portable totes that doubled as laptop desks, or ventured off into the library loft where you could touch the curved corners of the dome ceiling. Our minds were as wide open to learning as the vast space we were schooled in.

Perhaps surprisingly, nobody thought that it was woo-woo or weird to go to school in a dome, even though it was public. Our parents were mostly moderate, middle-class suburbanites. We just happened to come of age in an era where townships, developers—and people in general—were open to new ways of learning, living, and working.

Our minds were as wide open to learning as the vast space we were schooled in.

This era didn’t last long. The decades that followed saw the less-than-revolutionary construction of big-box designs, seemingly inspired by the Soviet bloc. Today, however, millennials are coming full circle, finally shaking the foundation of linear thinking. More and more places of business are opting for open-face floorplans, and there’s a resurgence of the popularity of shared living arrangements. Similarly, geodesic domes are making a comeback, earning a reputation as creative, spiritual, and ecologically-minded home dwellings.

As it turns out, a dome isn’t just a random, funky shape. It’s a purposeful space that’s rooted in the ancient science of sacred geometry where every aspect of design has a meaning that correlates to mathematics and metaphysics. 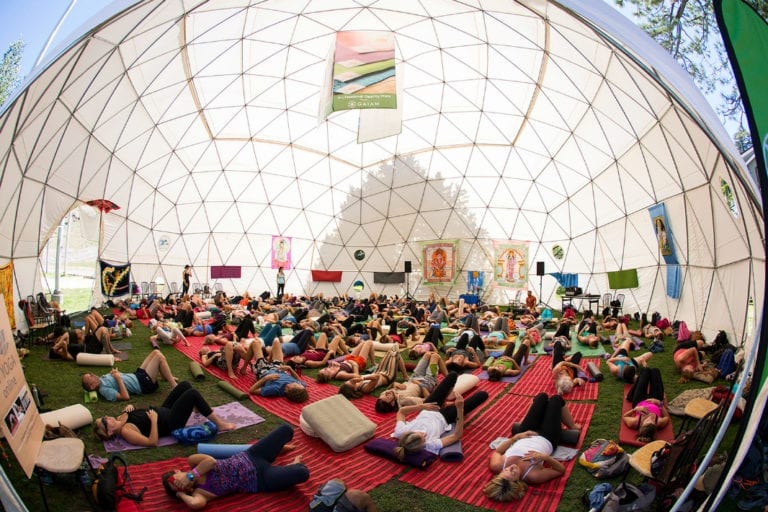 The Basics of Dome Science

To understand the science—and the experience of living in a modern day dome-dwelling—you need to start with its most famous modern-day architect, Buckminster Fuller. Fuller’s career as an architect began in 1917, working for the U.S. army. He decided to focus his life work on improving housing on a large-scale, and believed we could do more with less. This idea was the basis of thinking for a school of thought he would later coin known as “synergetics,” the physical and metaphysical application and philosophy of identifying, understanding, and using the geometric methods found in nature. This philosophy of efficiency and economy led to his first groundbreaking invention in 1927, known as the Dymaxion House, an air-delivered, modular apartment building. In 1947, he hit gold with his invention of the geodesic dome.

The first commercial dome was built for the Ford Motor Company in 1953, and the U.S. Army was once again among Fuller’s biggest clients. Fuller’s domes proved that the principles of synergetic geometry could work in a very practical way, saving its inhabitants up to 30 percent in energy costs. Fuller was awarded an American Institute of Architects gold medal in 1970 for his life’s work. The Buckminster Fuller Institute reports that there are currently more than 300,000 geodesic domes around the world, including the New Jersey school I attended as a child.

The Emotional Side of Domes

Nina Feliz Gonzales rents her geodesic dome in Taos, New Mexico on Airbnb. It’s 30-feet across, including a bedroom loft with a triangular window right above the bed for desert star- and moon-gazing. What she loves most about the space is the feeling of safety. “Maybe it’s the geometric engineering or the womb-like shape, but I always just feel solid in the dome,” she says.

That dual feeling of wide-open spaciousness combined with Nina’s sense of solidity and grounding can actually be traced to the scientific principles of sacred geometry. Sacred geometry is defined as the synthesis of the modern scientific and the intuitive artistic dimension of geometry. In his seminal book, Sacred Geometry—Philosophy and Practice, Robert Lawlor writes that sacred geometry is the belief that “geometry and mathematical ratios, harmonics and proportion are also found in music, light, cosmology.”

Coupled with the environmental benefits of dome life, it’s no wonder that domes are increasing in popularity; showing up on festival grounds, as cheap and flexible alternatives to permanent housing, and as school buildings, not unlike the one I attended as a child. Scientists are even pioneering the world’s first indoor rainforest in a geodesic dome in the UK, bringing the natural elements of the structure full circle. “My ideas have undergone a process of emergence by emergency,” Fuller said. “When they are needed badly enough, they are accepted.”

A half century after his invention, it seems the world is finally ready for geodesic domes to go mainstream.

Pacific Domes was founded by Asha Deliverance, whose life goal has been to create a sustainable future. Our company’s ambition is to promote the architectural integrity of the geodesic dome, and to spread it worldwide. Geodesic geometry is showcased in our visually inspiring structures. Each dome that we create is a masterpiece of design and ingenuity. Our geodesic domes are the image of the future, an aesthetic solution for all global shelters and event structures. Pacific Domes is the original manufacturer of fabric covered geodesic domes, since 1980. Our in-house manufacturing gives us the capability to design a dome tailored to your needs.