I’m never going to be a monk. I live in New York. I’ve got three kids. I run a business and work long hours. I go out for dinner. I love coffee and wine. Someday, we may throw in the towel, head for Northern California and spend most of the day meditating and tending our organic garden. Until then, I have got to find urban balance. Here are seven techniques I use to keep feeling good and on top of my game. It’s my “middle way.”

The first thing I want in the morning is a great cup of coffee. I live in Williamsburg so I can go to Oslo, Blue Bottle, Marlow & Sons, among others. That first cup of coffee definitely gets my brain going and, like many, I do some of my most creative and productive work in the AM. However, early morning caffeine jolts can make my stomach acidic and gives me a jangly energy. I’ve started drinking green juice every morning. I use ALOHA, a new green powder, in a glass of room temperature water with a splash of juice. And I eat a banana. Then I wait 10 minutes or so before my caffeine fix. I still get that coffee buzz, but the energy is more even and my stomach isn’t burning.

Exercise is obvious. Men are dogs and, in the end, we just want to chase balls. Tennis is my jam. Hitting the fuzzy yellow ball is unbelievably meditative. All I’m thinking about is the ball. If I can’t chase a ball, I go to the gym, especially in the winter. But I NEVER bring my phone. I’ve got 17 other hours per day to check email. The gym is a time to sweat, think, listen to music, and get away from your device. I’m always stunned that people want to check their texts between sets of curls. Leave the phone at home. Or buy a 20 pound phone.

3. Walk While You Work

Sitting is one of the worst byproducts of modern urban life. It’s horrible for your back and circulation. I take all my calls on my feet. I probably burn 300 calories a day just pacing but, more importantly, I am moving. I also have a standing desk.

The key is a big vessel. I drink out of large mason jars. Just put a post-it on your desk that says “drink water or feel like shit.”

This is an old parents’ weekend trick—the afternoon buzz. The beer hall is always full of strollers at 4 p.m. on the weekends. During the week, if you’re on a business dinner or at home, finish drinking by 7:30. This allows your body to process before going to bed. Going to bed drunk is horrible, especially in your 40s. You get dehydrated and never sleep well and drag through the next day.

When I’m not chasing a ball, I like to watch other men do it on TV. But, instead of couch potato’ing it, I take a yoga block and sit in virasana on the floor. During the commercials, I do mini-planks and chaturanga.

We all know the studies about screens & sleep. Sending emails and watching Netflix from bed is pretty enjoyable. Sure, it would be great to never look at a screen after 9 p.m. But, realistically, I simply try to create a short period between the time the computer and phone goes away and when I actually go to sleep. Sex is best, but reading is also acceptable. 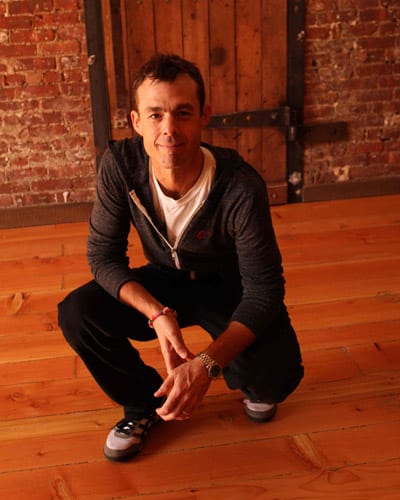 Jeff Krasno is the co-founder—along with Sean Hoess and wife Schuyler Grant—of Wanderlust. Jeff started his career in the music industry, working for RCA Records before he and Sean founded Velour Music Group, a hybrid management company and record label, in 1999. In 2002, Schuyler opened Kula Yoga Project in Tribeca and began leading yoga retreats around the world, inspiring what would become Wanderlust in 2009. Wanderlust now produces a growing number of the world’s largest yoga festivals around the globe, from British Columbia to Australia, from California to Chile. Jeff and Schuyler live in Brooklyn, NY, with their three daughters, Phoebe, Lolli, and Micah.