Curious for more? Explore other opportunities to practice bodywork at a Wanderlust 108.

Our bodies, minds, and spiritual selves are undeniably linked. We know this. We learn and practice this integration through our yoga practice. But did you know that breathwork, asana, and meditation aren’t the only means for integrating all of our parts for more complete wellness? Enter, bodywork.

Holistic and energetic styles of bodywork have come a long way, in part because they haven’t changed a bit. Even modalities that are relatively new (such as craniosacral therapy, founded in the 1980s) are based in ancient healing wisdoms that are influenced by a combination of integrative, traditional, and Eastern medicines. The one thing they have in common is that each modality is designed to make you feel some sweet full-body relaxation.

Which type of bodywork is right for you depends not just on what you hope to achieve, but also how you like to approach healing. While all the modalities described below are based in the physical realm, many find an entry point through spirituality, energy transfer, and even just good ol’ heart-felt connection and conversation. Below are some of the most common and noteworthy in the field. Pick you favorite (or one you know nothing about) and see how it makes you feel.

This modality follows Chinese medicine’s understanding of our bodies as a system of meridians, or pathways. Energy flows through these meridians as Qi (in yoga, we call this “prana”), but due to illness and lifestyle factors, blockages and congestion can halt or slow Qi’s movement. An acupuncturist inserts small, thin needles into specific junctures of these meridians to facilitate the opening of the channels. Acpuressure works in the same way, but is non-invasive; an acupressurist will instead apply pressure to the skin with the hands.

This form of bodywork has garnered attention as our understanding of the body’s fascia system increases. Fascia is a web-like network of closely woven muscle fibers that drapes over and connects the various parts of our musculo-skeletal system. Myofascial Release, or MFR, is a very individualized form of treatment (there’s no “typical” session), but all patients can expect, at its most basic, light but steady and consistent pressure to the muscle fibers. Unlike many forms of massage therapy, MFR does works directly on dry skin (no oils or creams are used), and the pressure is sustained, rather than kinetic.

Ever felt a “knot” in your muscles? These areas of built-up tension are known as trigger points. This form of bodywork is based on the concept that trigger points originate and live in the myofascial tissue (a.k.a. the fascia), rather than the large muscle fibers. Trigger point therapy, and its subset neuromuscular therapy, are similar to myofascial release, though more specific in area-targeting. It is thought that addressing trigger points from a myofascial, rather than deep muscle, standpoint better facilitates long-term and sustained healing. During a typical Trigger Point Therapy or Neuromuscular Therapy session, practitioners will firmly but gently work to unravel specific trigger points for long-lasting relief.

Craniosacral Therapy (CST) directly addresses and works with the fluids and membranes surrounding our spinal cord and brain—but that doesn’t mean it’s only used for brain and spine issues. Through soft touch and holding, practitioners release tension and chronic, pattern-based pain in the area. Because this region is known as the command center of our bodies, CST is thought to work with many ailments and diseases related to the nervous system, such as Alzheimer’s and PTSD.

This relatively new form of therapy, created by Edan Harari, is influenced by a variety of modalities, such as ortho-bionomy and myofascial release. Many come to KRT after having tried “everything,” with little relief, and often cite physical pain as their primary motivating factor. KRT aims to spark the body’s natural memory for healing and regenerating feelings of wellness, and works with each person individually to find their unique “entry point,” whether it is is body, mind, or spirit. Harai’s methodology is gentle, non-invasive, and may include mobilization work with the joints and light partner acrobatic work to facilitate healing through the force of gravity. Although there is no “one size fits all” approach to KRT, Harari aims to create a safe space for healing, without the pressure to “muscle through” anything.

Polarity, founded by Dr. Randolph Stone, encompasses many different healing modalities that work to “triage the central nervous system,” as Naomi Kenealy, a  certified Polarity practitioner in Syracuse, NY, explains. Polarity works with lifestyle re-evalution, food and diet changes, energy work, and yoga/movement. The goal is to address acute issues at their source and work with the body’s intuitive, innate wisdom for a well state. Says Kenealy, “The client is the healer. As a Polarity Therapist, I am a facilitator.”

No, this has nothing to do with rolling on the floor or laughing.  Named for founder Ida Rolf, this modality of bodywork combines myofascial release with movement. (Think: MFR + yoga + massage, and you’re starting to get the picture.) Often performed in a 10-session series, so practitioners can work to address and correct long-standing alignment issues, Rolfing reduces chronic pain and tension, and can dramatically reduce the chance of future issues. This is because pain isn’t just addressed and healed; it’s actually corrected at the source by working to imprint more sustainable postural patterns into the patient.

Like acupuncture and acupressure, Reiki works to open blocked energy channels in the body. A trained Reiki practitioner acts as a conduit to the transfer of energy for the patient. As patients receive energy in the areas where they most need it (for example, a blocked root, or muladhara, chakra), they may experience feelings of warmth and even buzzing. Reiki is performed through hand placement either above or softly touching the body. Although the patient typically receives a treatment on a massage table, he/she remains fully clothed throughout the session.

Don’t be frightened by the bruising—cupping has seen a boon of activity in the West as a result of high-profile endorsements from pro athletes. In this modality, cups (glass or silicone are most typically used) are placed over the body and suctioned to create a “vacuum”-like sensation on the skin. “ cups provide a decompression of tissue- separating fascia and other connective tissues from the muscle, creating space,” explains Melissa Schlegel, a licensed massage therapist who often uses cupping in tandem with her massage practice.

Once the cups are removed, patients may experience areas of redness on the skin, but when performed correctly, neither the process nor the aftermath is painful; it is often described as a light pinching sensation. “Bruises can occur, but should not be the goal of treatment. If you look like a lady bug after the session with bruises that are black in color, you may want to find a different practitioner,” says Schlegel. This helps increase blood flow, and expedites healing on a muscular level. But cupping isn’t just beneficial for Olympic swimmers; it is used to treat everything from conditions like plantar fascitis, carpal tunnel syndrome, to generalized tightness.

Made famous to the public in Stranger Things, float therapy is performed in what’s known as a sensory deprivation tank, which is a salt water bath set at skin temperature. The high salinity of the tank allows the patient to float effortlessly. The tanks are sound-proof and completely dark, which gently “forces” the patient to do little beyond focus on his or her breath and relax. A meditative state is more accessible to many, which can help facilitate deep healing and anxiety release. If you aren’t claustrophobic, this is a surreal experience well-worth checking out.

Ah, trusty massage. It’s one of the hugest categories of  bodywork, and the type you seek will depend on your goals. Here’s a brief description of the most common you’ll encounter in typical massage therapy practices:

Deep Tissue. This form of massage uses long, slow, and firm strokes to release and steadily work through tension in the deep fascia. Sensation will vary from medium to intense, but many patients find it relaxing, and may even experience lowered blood pressure from a session.

Swedish. Swedish massage is commonly confused with deep tissue, but a traditional Swedish massage will include a greater variety of motions by the practitioner, including kneading and tapping. Many avid Swedish massage fans love it for the intensity and “hurts so good” results.

Thai. Sometimes lovingly called “lazy man’s yoga,” Thai massage works to increase range of motion and flexibility. In this modality, the patient wears loose-fitting, comfy clothes. The practitioner manually adjusts the patient into a series of therapeutic yoga postures on a mat on the floor. It’s kind of the best thing ever, especially when you practice Vinyasa regularly.

Shiatsu. Similar to acupressure, shiatsu works to open the body’s energy lines by manual pressure at various, specific points on the body. Many shiatsu practitioners integrate the patient’s energetic and emotional reactions in their work, making it a true mind-body-spirit experience.

Reflexology. Contrary to its most common stereotype, reflexology is so much more than just a foot massage. Practitioners may choose to work on the hands, feet, ears, or any combination of the three. Light to firm pressure is used on various specific points on the feet, hands, and ears; these points directly correspond to the internal organs, as well as the muscular, skeletal, and nervous system. 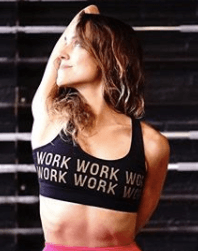 Rochelle Bilow is a yoga teacher and wellness writer based in Upstate New York. She’s an advocate for body positivity and healthy attitudes toward food and spends the majority of her free time concocting feel-good recipes. She’s also a nature nut and proud corgi mom. Connect with her at her website and on Instagram.