Seane Corn found God in an all-male gay sex club in New York City. A proclaimed atheist, it was an unexpected turn, but it was the beginning of the path that became her life’s work. “My experience of spirituality has never been woo-woo,” she says. “It’s always been a little bit dirty around the edges.”

In her new book, Revolution of the Soul (available September 2019), renowned yoga teacher and co-founder of Off the Mat, Into the World—a collective that works with global and local leaders to evoke and support grassroots change—Seane explores this evolving spirituality. She believes that internal transformation is necessary to support impactful social change that can move us, as a society, toward peace. By sharing stories of her personal growth through the lens of a half-century of experience, the book is a roadmap for readers to plot their own evolution, and, subsequently, the revolution of their souls.

From Atheist to Spiritual Teacher

It was first the tools of yogic philosophy and practice that Seane was drawn to. It wasn’t an easy process, by any means. “The spiritual journey gets complex when we start to look at the idea of oneness,” she says.

It was in those early years that Seane was first called to be of service to others. With the best intentions, she went out into the world to help others. But she wasn’t listening—and it wasn’t long before she became aware of the shadow side of service, something that she says not all spiritual communities necessarily address appropriately.

“What was reflected back to me was that what I was doing replicated the oppressor and the oppressed dynamic that exists; that my helping was simply saviorism,” says Seane. “I couldn’t have known this; I didn’t even understand that yet.” It took really delving into the principles of practice—that no being is free until all beings are free—that she began to catch glimpses of her own need to accept responsibility for the separation of others, even as she was trying to “help.”

For Seane, a white woman from New Jersey, these were deeply buried and subconscious inheritances. In Patanjali’s Yoga Sutras, largely considered the foundation of modern yogic thought, Sutra 3.18 discusses the idea of samskaras, psychic scars from our ancestors that we carry into our modern lives, even with the best of intentions. “That’s why,” says Seane, “I’m asking people to really look at power and privilege, white supremacy, all the ways in which we embody ‘isms’ because of ancestral, historical, or cultural trauma, and how that lives in our bodies—and what true accountability looks like when we want to make social change.”

Seane posits that in order for there to be true soul revolution, there must first be this kind of evolution. It may not be easy or quick, but necessary.

It’s not as if, however, a close relationship with a spiritual teacher, consistent practice, or even profound work with your own samskaras, is a magic bullet to soul revolution. “The lessons never end,” says Seane. “The complexities just keep getting deeper.” In one chapter she tells a relatively recent story about a time she “should have known better.” The incident (you’ll need to buy the book if you want to hear more!) happened when Seane says she already had the resources not to make the mistake that she did.

“It’s in the accountability that real change can happen,” she says. “I can still mess up, and simultaneously be aware of what’s happening while it’s happening, which is what differentiates me from when I was 20.” The more you practice and work with the tools of deep work, the more accessible those tools become. That way, in the moment, you’re more able to respond to triggers or bad behavior in a healthy way—regardless of if you sometimes slip up.

There are, of course, some yogis who would argue that yoga is purely an inward journey, and that social revolution—politics—has no place in practice. “Odds are if you’re saying that, it’s your privilege that allows you to say that,” says Seane.

B.K.S. Iyengar, author of the and founder of the Iyengar style, wrote in his 1966 seminal Light on Yoga that, “Practice of asanas (physical postures) without the backing of yama and niyama is mere acrobatics.” The yamas and niyamas are the ethical code for yogic living laid out in Patanjali’s Yoga Sutras. Among other directives, they include the principle of ahimsa, non-harming.

“Politics is what impacts policy, who gets to be well and who doesn’t, who gets access to resources and who doesn’t,” she says. To see that interdependency and not go toward it is to be complicit in the suffering of others. “If someone has the privilege to say, ‘I don’t want to bum out my bliss,’ then I have to really question what they understand to be yoga,” says Seane. “My understanding of yoga is about the we, about the collective, not the individual.” They may be, perhaps, as Iyengar said, merely practicing acrobatics.

Is it really possible, then, to have a revolution of the soul without committing to some sort of activism or work to make the world more just and free for all beings? “I think that’s an inevitable byproduct,” says Seane. But again, it doesn’t happen overnight. Seane says it took her six years of hardcore asana before she ever had an emotional response on the mat. It took her many more years of investigating her own personal traumas—and doing the shadow work of her inherited biases. “Then there was a natural organic shift when I realized the practice was never about the stretch, and it was always about the reach,” she says.

Seane emphasizes that again, as mirrored in the structure of her book, the personal evolution has to come before the revolution of the soul—and it’s not a linear progression. “The reach was what was important,” she says, “but if I had tried to do that first, it would have come from my ego… a saviorism to fix something that I want to fix within myself.”

Revolution of the Soul, then, is not only a brilliantly-woven series of stories that detail what a personal spiritual evolution could look like—again, beginning in an all-male gay club in NYC in which Seane found god (read the details in the free chapter online!). It’s also a book of hard-won introspection and wisdom to inspire readers to begin their own personal path toward revolution of the soul.

“I hope, for people who are on a path looking to both heal themselves and contribute to a world that is more integrated, that they find the narratives refreshing, accessible, and relatable,” says Seane. “I also hope that the tools can actually be applied to their own life wherever they’re at—whether they’re activists or not. It’s fodder for reframing one’s personal narrative.”

Order your copy of Revolution of the Soul, and learn from Seane in person at Wanderlust 108 Brooklyn. If you can’t make it to Brooklyn, you can grab a 108 Online ticket, allowing you to tune in online and practice with Seane leading up to the livestream of the event. 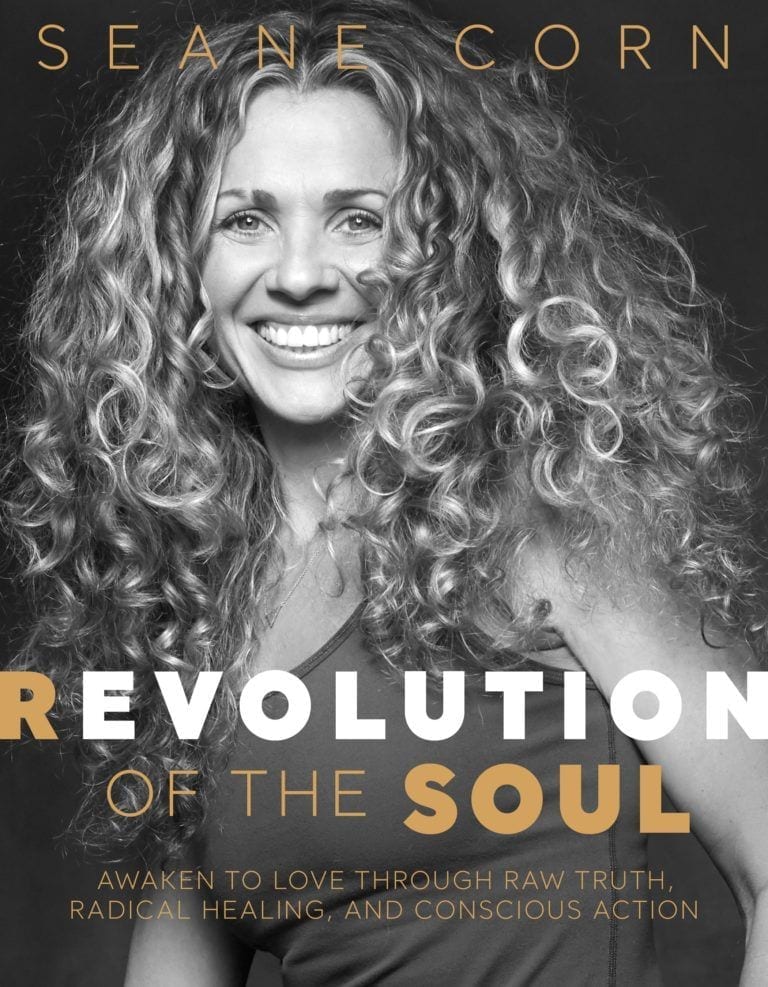 Lisette is a writer, yoga teacher, and content director. She’s a member of the founding leadership team for Yoga Unify, a new yoga non-profit, and the co-author of The Yoga Almanac. Lisette completed her 200-hour training in Brooklyn and her Reiki attunement in India, and furthered her studies with Leslie Kaminoff of the Breathing Project, Tiffany Cruikshank, and Andrew Holecek. She’s also a Master Grief Coach and Death Doula, whose work is focused on integrating the tools of mindfulness and asana for grief healing and end-of-life anxiety. A filmmaker in a past life, Lisette has made videos with community leaders such as Dharma Mittra, Eddie Stern, and Eoin Finn. She lives with her husband and animals in the Hudson Valley, NY.