Skip to Main Content
Photo by Bence Ball Schottner
My interest in the brain began when I was 15 years old in Honors Biology. I had my very first anxiety attack and I had no idea what was going on—with my mind, my heart, or my body. This began my multi-decade conversation with science, psychology, spirituality, and relationships. When I arrived to college, I was drawn to learn more about the brain science that supports cognitive psychology— all so that I could better understand my own anxiety. The study of neuroscience led me to pursue a graduate degree in Edinburgh, Scotland. It was there that I began working in a psychiatric hospital using fMRI technology to look at the brains of people with psychosis. That imaging research led me to a research group in Palo Alto, California where we used fMRI technology to look at the brains of people experiencing addiction, chronic pain, anxiety, and depression. The research included another technique—mindfulness.

Does mindfulness change the brain?

The research findings were incredible. I had never been introduced to mindfulness meditation, and had never seen the impact it had on brain, behavior, and overall wellbeing. We were very informed by the research findings of Jon Kabat Zinn and we were trained in MBSR (Mindfulness Based Stress Reduction) Our patient populations across-the-board experienced less pain, less addiction, less depression and less anxiety. Our research findings also showed that, over time, the brain started to change. Because brains were changing over time, so was behavior. We were using mindfulness to treat and heal—and realized we could also explore mindfulness to prevent the illnesses we were studying. When I left this research group, I had the idea that we could also use mindfulness as a preventative health tool. At the time, it was just a theory. While mindfulness and meditation research is still rather new in the field of neuroscience, it is still a trending topic both in science and in wellness (and self-help) conversations that I was interested in exploring more deeply. Many people come to the science of yoga and meditation after practicing mindfulness — I think in an effort to better understand the brain and to better understand the body. There is a deep sense of awareness in these practices that allow for moments of stillness and embodied presence. My journey was the opposite. It was almost as though I needed the science to show me the results before I was willing to take a leap of faith. It wasn’t until five years after my time as a researcher that I began to have my own sitting practice. I was both stubborn and resistant—and I knew the findings supported the practice! Still, it took me a very long time to come to my mat and to my cushion.

There are several studies that have investigated the changes in brain activation during specific activities associated with the practice, and there are many research findings that are consistent with the findings we saw in our group. Studies have revealed that meditation increases neuroplasticity in the structure and function of brain regions associated with the regulation of attention emotion and self-awareness. Brain imaging research also shows that the practice of mindfulness meditation changes brain activation patterns. While I think it’s important to understand why and how mindfulness works, I often find that individuals seeking a practice best understand the practice by simply doing it. It is helpful to know why and how the brain works, but it is more helpful to be in presence. By simply being in presence, you begin to train the mind and the body. We don’t reach that experience by reading about it, “understanding it first” or intellectualizing it. That being said, there are a few things that occur in the body that help give words to what we feel in the practice. The most felt is the nervous system. Our nervous systems are beautiful, complex, and wonderful, designed up of many parts. One of these is the sympathetic nervous system, responsible for our Fight-Flight-Freeze reaction. It is one branch of the autonomic nervous system and is believed to act ‘autonomously’ and unconsciously, without us telling it to act. The other main branch of the autonomic nervous system has less information about and it is called the parasympathetic nervous system. What we do know is that the parasympathetic system helps us manage our fight and flight response. It also has both indirect and direct influence over digestion, muscles, cardiovascular system, endocrine system and so on.

It is helpful to know why and how the brain works, but it is more helpful to be in presence.

When understanding the role of this brain-body connection, we must discuss how the vagus nerve plays in the practice. The vagus nerve is the thing that connects our brain to our body. It does this by helping the body regulate its stress responses and is the mechanism by which we can positively influence our health and bodies with meditation. To put it simply (or in more modern terms), the vagus nerve has been described as our “nervous system hack,” as one of the longest nerves in our body (the sciatic nerve is the longest). The name roughly translates as ‘wandering nerve,' and it journeys from our brainstem and winds down throughout our body, arriving in the abdomen. On the way, it connects with many of our major organs—including our heart and lungs. Science has been aware of it for a very long time; as well as the fact that the vagus nerve is semi-responsible for our body’s regulation of heart rate, breathing rate, digestion, and so forth. We know from our experience of meditation that a slowing down of each are all by-products of the practice. The main takeaways (and there have been many!) in all my years of research, practice and study are these: As the great Wayne Dyer said, "You can't always control what goes on on the outside. But you can always control what goes on inside." This, perhaps, is the crux of why I became a meditation teacher after leaving my career as a neuroscientist: because of the research and more importantly because of the practice. — 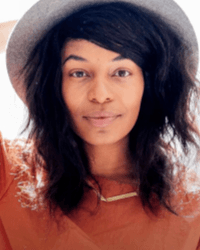 Nkechi Deanna Njaka, Msc. is a neuroscientist, choreographer and meditation teacher. She has spent the majority of her life investigating the relationship between the brain and the body and has always felt the significance of their integration. Through her work as a neuroscientist as well as a professional modern dancer + choreographer, she discovered that mindfulness and creativity are crucial for sustaining individual and global wellbeing. She attended Scripps College in Claremont, CA where she majored in neuroscience and dance and went on to complete an MSc. in Neuroscience at the University of Edinburgh. Nkechi Deanna Njaka is the founder of NDN lifestyle studio, co-founder of Sitting Matters, and a 2017 YBCA Truth Fellow.