What do yoga and tattoos have in common? Perhaps more than you think; both are ancient arts that have been part of human culture for thousands of years, both are becoming more and more prevalent in modern Western culture each year, and both are vehicles for connection and expression of the self.

I got my first tattoo on my 18th birthday. I had been waiting patiently for it for years. Since then, I’ve spent many hours in the cozy and comfortable setting of Joy Rumore’s tattoo shop, Twelve 28 Tattoo, in Ridgewood, Queens. Joy has done the vast majority of my tattoos and along the way we’ve become great friends as well. Recently I had the chance to discuss tattoos, culture, and becoming a mom with this fierce lady artist.

In college, you studied anthropology and forensics—were you drawn to tattooing because of its cultural significance?

You’ve been a tattoo artist for more than 15 years, in that time it seems tattoos have really exploded from counter-culture phenomena to a generally accepted part of our modern lives—would you agree with that?

Well, I still wouldn’t call tattoos “generally accepted,” but they are certainly more mainstream and prevalent in pop culture. I do believe it has become a more accessible and acceptable thing now. But there is definitely still a stigma attached, one that I feel nearly daily. I would say the comments I get regarding my personal appearance are now a 50/50 split of kind and rude—with a bit of leeway for wonderment.

In the yoga community, the purposes behind tattoos are often very spiritual. Have you done a lot of yoga-related tattoos? Any favorites come to mind?

I have seen a fair amount of yoga-inspired tattoos. I’m sure I have missed the reference of many that are related to yoga because I don’t ask why my clients are getting the design they have chosen. If they are interested in sharing, I am happy to discuss, but tattooing (in my mind) is personal and I like to respect that space.

Speaking of popular tattoos … do you see a lot of trends in people’s tattoo ideas? How do you handle it when people bring in the same ideas over and over? Do any “trending” tattoos come to mind?

There are always trends: tribal armbands, the Tasmanian Devil, lower back tattoos, anything turning into birds, infinity symbols, Chinese characters, zodiac signs, anything traditional Americana—whatever the hottest celebrity just got—the list goes on and on. I will offer my input, but not in an admonishing way. Rather, I kindly point out that this is a very common thing, that a million others have it, and that I could draw a completely custom design instead.

But particular images resonate with people in specific ways. If someone wants that tattoo because it makes her feel a certain way, then fine. It’s her body and her choice and I would be disgusted with anyone who would try to prevent me from doing what I wanted. Who am I to do the same? I prefer educating my clients and letting them make up their own minds.

Is there a difference between a heavily tattooed person and someone with one small butterfly tattooed on her ankle? As tattoos are becoming more accepted, have you felt a shift in the way people respond to others with very noticeable tattoos?

As I said, there is definitely still a stigma attached, and I get a pretty even mix of compliments and rude comments. Also, keep in mind that to some people there is no difference between the heavily tattooed person and the individual with a small, less-visible tattoo. Many view them all as the same kind of person who would defile their bodies.

Have you ever gotten pushback for your tattoos?

Of course! I just don’t care.

I remember you asking me if I was sure I wanted to go ahead when we did my first large forearm tattoo. I appreciated the warning at the time but was surprised to think that this tattoo would be more publicly criticized than others. Do you always have these talks with people getting their first “major” tattoos in noticeable places?

Yes, I generally do. I think there is such a saturation of tattoos in the media that many do not understand the repercussions of their actions. I will inform someone of the possible negative outcomes, but I still won’t refuse to do something—unless it is unsafe, will not come out the way the client thinks it will, or the prospective client is acting … inappropriately. I’m not your mom—make your own choices and live with them.

Find someone who does the kind of work you like. Don’t bring some realistic design to a strictly traditional artist and vice versa. Don’t expect to get a “hook-up.” Be respectful. Understand that “cheap work isn’t good and good work isn’t cheap” is a saying that exists for a very good reason. Have some reference pictures, make sure you are comfortable with the artist, and ask questions.

You’re about to become a mother. What’s your mother’s opinion about tattoos—has it changed over time?

She was less than thrilled when I started getting tattooed. But at some point, she obviously stopped worrying about it as now I tattoo her. (Laughter) Be open to change, people!

What will your stance on body art be for your kid? Do you hope to one day tattoo your own child?

That child will have to wait until they are 18 to be tattooed, or sneak out and do it behind my back just like I had to do, damn it. (Laughter) Honestly, I haven’t even thought about tattooing my child. That’s a long ways away. Will I even be tattooing then?

Anything else to add? 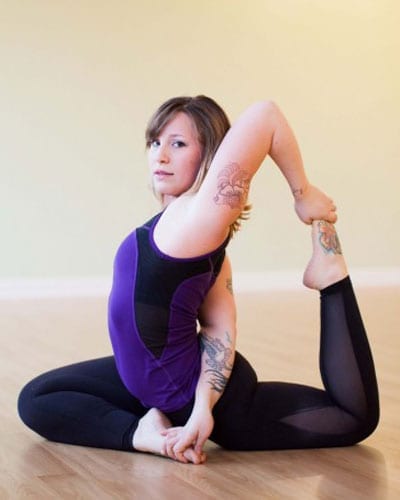 Elizabeth Crisci is a yoga teacher and artist in Fairfield County, Connecticut. She is the creator of Love by E, handmade gemstone mala and jewelry. She teaches in workshops, special events, and trainings in the Northeast in addition to a range of regular, weekly classes. She teaches smart and accessible yoga designed to make you feel good. She loves every minute of her work. You can find her writing and her teaching schedule on her website.