I teach Yoga For Men classes in Bristol., and am often contacted by prospective male yogis enquiring about my classes. Almost apologetically, they consider themselves to be the most inflexible men in the world, with grand ambitions of being able to touch their toes. In my replies, I always put a virtual arm around their shoulder and reassure them that they are not alone in thinking this way.

As YogaDad, I symbolize what yoga means to every man, not just the lucky few. My philosophy is to break stereotypes on what yoga is, how it should be practiced, by whom and what they should be wearing. I love to reach out to new audiences, typically the kind of people that would have never considered practicing yoga before, encouraging them onto the mat and tasting the benefits.

My classes are growing in popularity and I love to see new faces starting their yoga journey with me. I attract a mix of young professionals, middle-aged men, grandparents, Not only that, but, many of my students keep coming back. I offer a loyalty card, which when completed provides my students with a free 10th class. As much as the free class is welcome, I know that my students are coming back for so much more. The richness of a regular practice and the positive impact yoga has on their physical and mental health & wellbeing is more than money can buy.

“I have found a vast improvement to my posture and all round flexibility since starting yoga. Any back pain has now disappeared!“

The sense of community has also organically grown and is incredibly important to my practice. Many of my students told me that they found it uncomfortable to attend classes with a predominantly female group. Instances of being singled out for not doing a pose ‘perfectly’ understandably discouraged some students from returning to class. More importantly, they became disengaged, turning their back on yoga. So, they were very thankful for a yoga class designed with them in mind – a safe space for them to practice yoga amongst like-minded men.

“ What I particularly enjoy about the Yoga for Men classes is the sense of “we’re all chaps of a similar age, and we’re all in this together”. There’s no peer-pressure regarding our respective abilities, and there’s not a ‘Bendy Wendy’ in sight! “

Last year, I organised a Yoga For Men day retreat  in a beautiful local village in the rolling Somerset countryside. The small group benefitted from a personalised day including energising and restorative yoga classes, a meditation practice, a ‘silent’ country walk to connect with nature and delicious locally sourced food.  The sense of togetherness made for a very special day.

I am incredibly proud of all that we have achieved together, and we are only just getting started. My male students in Bristol are well and truly bitten by the yoga bug, keen for me to provide them with ‘homework’ between classes. I have exciting plans for my classes this year., reaching out to male yogis in other parts of Bristol. I also have a retreat in the most breath-taking location in the pipeline and am organising a new wellbeing village at Keynsham Music Festival this July. Yoga For Men will be front and centre of its programming.

The men’s yoga movement is growing. Embrace the imperfect and become a part of it. 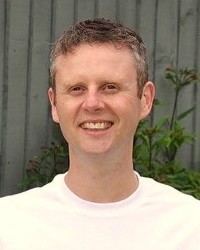 Rob is a yoga practitioner from Bristol, England with over 10 years’ experience. He is also known as YogaDad which resonates as a Dad of twin boys. Rob’s philosophy is to inspire those that may not have considered yoga before to give it a try. He seeks to break down stereotypes of typical yoga practitioners – this includes through his popular Yoga for Men classes. Rob has a number of media appearances under his belt – this includes television and radio interviews with major media corporations – BBC, ITV and Sky TV.