I complain about the lack of diversity in yoga classes all the time because even now, in the wake of the body positivity social media movement, yoga classes in my local community tend to be primarily attended by the small bodied and pale. I can’t tell you how many times I’ve settled myself into a class of yoga students who are bedecked and bedazzled, a multi-colored spandex army, only to think helplessly, “WHERE ARE MY FELLOW CURVY PEOPLE? WHERE ARE MY BROWN SISTERS AND BROTHERS?” Thankfully, classes are gradually becoming more ethnically diverse. But when it comes to body size? We’re still in the dark ages.

Let’s be clear: I do understand why Western yoga classes aren’t very size diverse—there’s a wide range of people who feel completely excluded from the yoga world and it’s because our media only captures and reflects a small pocket of practitioners. But placing singular blame upon yoga businesses and the media does not address the real solution. While it’s obviously critical for yoga businesses to be more representative, it’s equally important for yoga practitioners of all shapes and sizes to be much more visible in our local communities. Think about it. If class attendees are predominantly white, thin, affluent, and female, who do you think will be the focus of yoga-related marketing?

Many yoga businesses are unintentionally size-phobic, but I think “sizephobia” is merely a reflection of a widespread body negativity which has fully infected our social zeitgeist. In fact, sizephobia is most evident in our self-reflections. How many times have you stopped yourself from trying out a new physical activity because you felt your body wasn’t up to snuff? Full disclosure: EVEN I—Jessamyn, who spends most of her day stumping atop the body positivity soapbox—have definitely made this judgement. In fact, my problems with body confidence are why I’ve never tried Pilates: I’m frequently intimidated by the lean, svelte physiques of Pilates enthusiasts even though I know the core workouts are probably right up my alley. However, fear of being judged and excluded is a self-fulfilling prophecy.

When I judge myself in this way, it makes a much bigger impact than the judgment of my friends and families because this judgement mars my whole life. By believing we’re “too fat” to attend yoga (or Pilates) class, we limit perspective in other parts of our lives as well.

There’s ample space for all of us in this yoga world—we’re all working toward the same goal. The only way we’ll feel like a united community is if everyone who looks or feels “different” steps out of the woodwork and carves space for a more diverse generation of yoga practitioners.

The only way to change the status quo is to BE the change: Attend classes, even if you’re the fattest person in the room. Try out festivals, retreats, and workshops—stop being afraid of what people will think. All that matters is the personal happiness we create and foster on and off our mats. 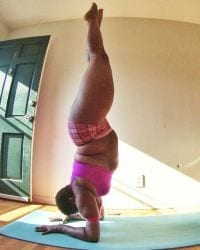 Jessamyn Stanley is a North Carolina-based yoga teacher, body-positive advocate, and writer. Her classes provide a body positive approach to yoga which celebrates students’ bodies and encourages them to ask “How Do I Feel?” rather than “How Do I Look?” when practicing. Jessamyn has been featured in a variety of print and online publications including Good Morning America, The Huffington Post, NPR, People, Good Housekeeping, Cosmopolitan, Fitness Magazine, Yoga International, among others. For more body-positive yoga tips, check out her blog and follow her on Instagram @mynameisjessamyn or on Facebook.