There’s no shortage of a burgeoning conversation around troubled men in America. Rates of depression and suicide in men continue to increase—in 2016, according to the American Foundation for Suicide Prevention, rates of suicide among men were more than 3.5 times what they were for women. In a 2011 episode of the New Psychology of Depression Podcast out of Oxford University, Professor Mark Williams and Dr. Danny Penman predicted that if depression was eradicated from the world overnight the number of suicides would be reduced by 80 percent. Some psychologists believe that it’s almost only in depressive episodes that suicides occur.

The trick is that in many parts of the world—including the US—depression among men is still a taboo subject. It’s often seen as a sign of weakness; which from an early age, a young boy is taught to hide. We’ve made great strides to encourage fluidity in feminine gender stereotypes (“My daughter can FOR SURE play with cars”); in a recent Gallup poll, young women place as much emphasis on the importance of career advancement as their male counterparts, while older women place significantly less. That idea that “you can be anything you want?” Our daughters are getting it… But what about our sons?

In the wake of #MeToo, we’re beginning to have some difficult national (and international) conversations about what it means to raise a healthy boy. The feminist icon Gloria Steinem summed up the issue in a 2015 Facebook post by saying: “I’m glad we’ve begun to raise our daughters more like our sons—but it will never work until we raise our sons more like our daughters.”

When we teach our sons that it’s OK to be sensitive, to slow down, to breathe—when we teach them that it’s OK (nay, necessary!) to tune into their most intuitive, empathetic selves, we’re laying the groundwork for them to be healthy, functioning, non-depressive or aggressive men. You’d be hard-pressed to find someone who doesn’t want to advocate for that.

So what can we do? And can yoga help?

Of course yoga can help. Practicing asana has deep physical effects on the brain that don’t require any effort other than movement. In his book Yoga as Medicine Dr. Timothy McCall cites studies showing that prolonged practices (3–6 months) of hatha yoga can reduce cortisol (the stress hormone) levels, and increase serotonin (the happy hormone) in the brain. When practiced along with meditation and pranayama, 60 percent of patients showed improvement in sleep patterns, digestive symptoms, their mood, and social interactions.

And it goes deeper than that. In his book Ashtanga Yoga—Practice and Philosophy, Gregor Maehle writes that, “the body today is nothing but the accumulation of our past, thoughts emotions and actions.” It’s long been known in the yoga community that deep-seated emotional releases can come from opening certain parts of the body. There is no shortage of yogis who have experienced significant emotional release from deep back-bending or hip-opening classes. And simply letting go of physical tension can alleviate the feeling of tension built up by stress and depression.

There is also a direct connection with posture and mood. Improved posture from prolonged practice of yoga helps to promote deeper natural breathing, which increases oxygenation of the blood and can lift energy levels.

Young men often don’t want to talk about their problems, which makes traditional therapy a tad tricky. But with a regular yoga practice that moves and opens up the body, a man can learn to detach from and and gain insight into self-destructive patterns. This could have profound therapeutic benefits for a young man’s mental health… Without him ever needing to sit down and go through a traditionally uncomfortable therapy session.

Pranayama practices—in particular Nadi Shodhana and Bhramari—are powerful in the prevention of depression. Nadi Shodhana balances the left and the right side of the brain and also balances the chemical levels in the brain, particularly cortisol and serotonin. Practiced before bed, Bhramrhi can encourage better sleep and reduce the risk of falling into the sleep-depression cycle.

Meditation promotes mindfulness and observation of the body and the mind. By becoming more aware of the body and the breath and by learning to watch thoughts occurring and their patterns this creates awareness of the beginnings of a depressive episode. By recognizing episodes before they start and by having tools—like asana and pranayama—to turn to when the early onset symptoms of depression occur, the episode can be stopped before it starts.

By introducing yoga to young men at an early age, perhaps during their most challenging teenage years, we can give them a tool to support them as they navigate through a world that is changing quickly. In doing, we can begin to reduce these alarming rates of suicide among men—mindfully.

This piece was adapted for Wanderlust from Himalaya Yoga Valley International Yoga Training Centers. For more articles like it, check out their blog here. For more information on their training programs, check out their site here. 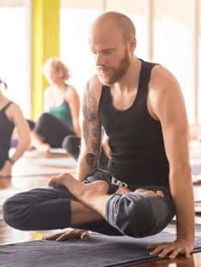 Dan Kirby completed his Teacher Training in India at the established and renowned Himalaya Yoga Valley Centre in Goa. His training at Himalaya was lead by Sri Yogacharya Lalit, a Yoga Master initiated into the tradition of Swami Rama and the Himalayan Sages before him. His studies included traditional Asana (Ashtanga and Hatha styles), Pranayama, Meditation, Yoga Philosopy, Anatomy and Ayurvedic Medicine. Dan is most passionate about removing stigmas around yoga that make it seem inaccessible. “It’s about integrating the traditional principles and practices into a modern routine,” he says, “and it’s my belief that it’s a yoga teacher’s job to lead their student on this path.”